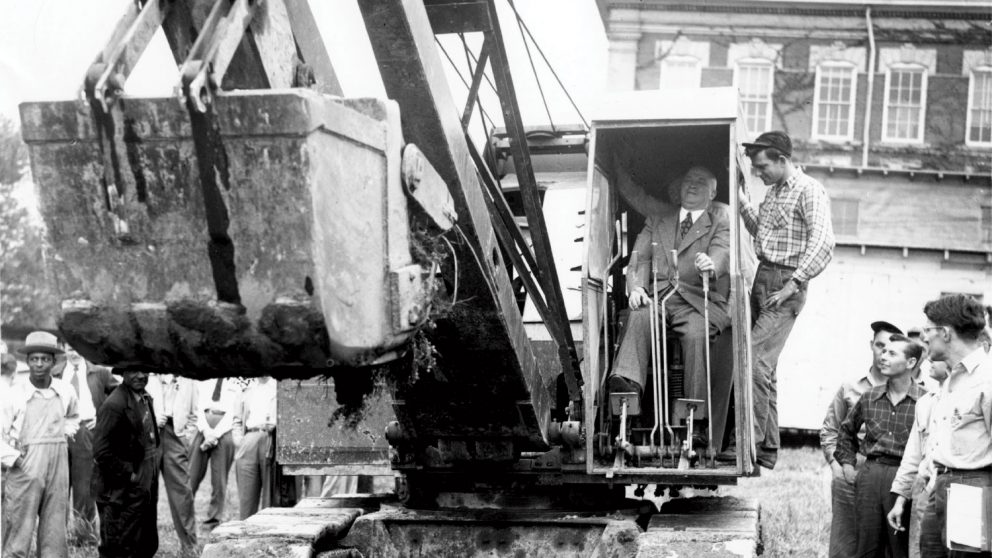 Groundbreaking, the ceremonial kick-off to a building’s construction, usually involves several dignitaries lined up with shovels in hand and cameras at the ready.

When the College broke ground on Riddick Engineering Laboratories in 1949, Engineering Dean J. Harold Lampe took things a little further, taking a seat in the cab of a steam shovel being used to begin grading work for the project.

Completed in 1950 and first referred to simply as the Engineering Laboratories Building, the 103,000-square-foot structure of sand finish brick with limestone trim and granite entrances cost $1.3 million to build.

The building was later named after Wallace Carl Riddick, who served as president of NC State, dean of the School of Engineering and the first football coach. NC State’s first football stadium, once located nearby, also bore his name.

The College will hold another significant groundbreaking this spring, when it begins work on a building that is just as important to the future of NC State engineering as Riddick Engineering Laboratories was in the late 1940s.

Fitts-Woolard Hall* will be the new Centennial Campus home of the Edward P. Fitts Department of Industrial and Systems Engineering; the Department of Civil, Construction, and Environmental Engineering; and the dean’s administrative offices.

It will be the College’s first building groundbreaking on Centennial Campus since a ceremony was held to mark the beginning of work on Engineering Building III on Feb. 27, 2008.

Learn more about the planning for Fitts-Woolard Hall.