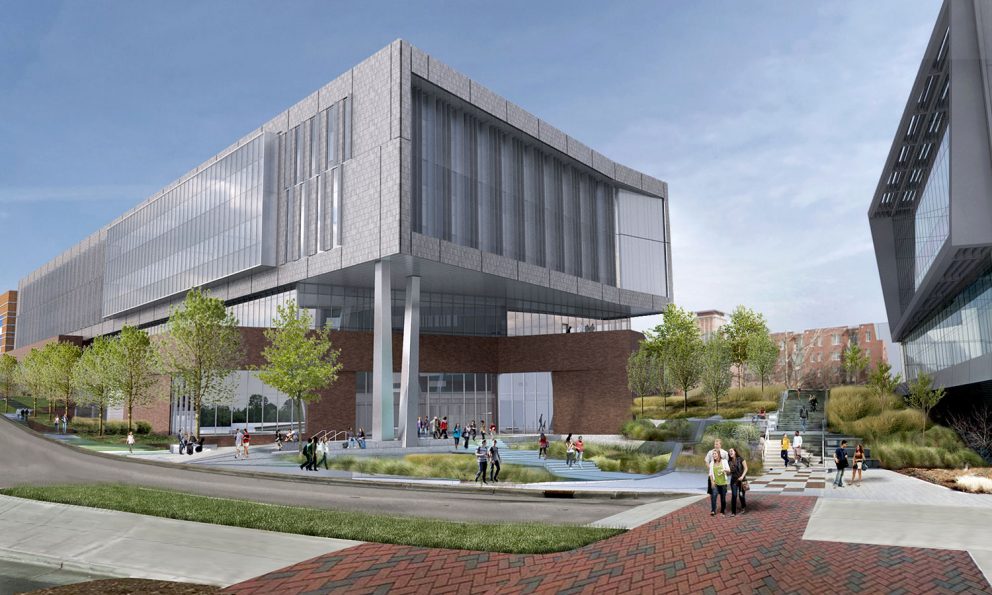 Since its establishment in the mid-1980s, Centennial Campus has represented the bold future of NC State University and the College of Engineering. Over the last 15 years, the campus has experienced rapid growth. One of the most exciting areas on the campus is the Engineering Complex on the Oval.

In the early 2000s engineering buildings I, II and III started the College’s move from main campus to Centennial and sparked new energy into the faculty, staff and students. Over the last 10 years, the College has moved up in the U.S. News and World Report graduate rankings to 12th among public engineering colleges, the annual research expenditures have doubled to more than $200 million and our faculty members and students have created more than 40 new startups and spinoff companies.

In late February, contractors began site work for Fitts-Woolard Hall,* the College of Engineering’s newest academic and research building. The future home of the Department of Civil, Construction, and Environmental Engineering; the Edward P. Fitts Department of Industrial and Systems Engineering; and the dean’s administration marks the next step in the unification of the College on Centennial Campus. Fitts-Woolard Hall is scheduled to open to students and faculty members in June 2020.

A new way to build 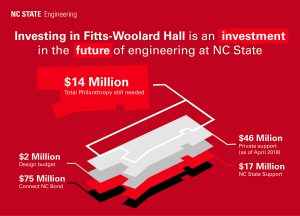 Fitts-Woolard Hall represents a first-of-its-kind infrastructure project for NC State, using a public-private partnership to fund the construction of an academic building. The $154 million project received $75 million from the people of North Carolina through the 2016 bond referendum. The NC Legislature provided $2 million, and the University will provide $17 million, leaving the remaining $60 million to be raised from private donors. So far, the College has raised $46 million.

“We are very grateful to the more than 300 people who have stepped forward to help us reach our funding goal for Fitts-Woolard Hall,” said Dr. Louis A. Martin-Vega, dean of the College. “We reached out to our alumni and friends, and they have really come through for us.”

With a little more than $14 million left to raise, the College continues to need the help of its alumni and friends. To aid the fundraising effort, the NC State Engineering Foundation (NCSEF) has developed a portfolio of giving opportunities for donors.

“We wanted to give our donors multiple opportunities to feel included in this important project,” said Lora Bremer, executive director of major gifts and campaign planning for the NCSEF. “These giving societies allow donors to participate at various levels, knowing that their gift is supporting the future of engineering at NC State.”

The Cornerstone Society comprises the lead donors who give $100,000 or more to the project and offers donors naming rights in Fitts-Woolard Hall as well as in other engineering buildings.

Dean Martin-Vega and his wife, Maggie, made a leadership gift to initiate the Dean’s Oval Club for donors who want to give between $50,000 and $100,000 over five years.

To encourage participation by the College’s young alumni, the Dean’s Young Alumni Oval Club was established for donors who have graduated within the last 15 years and pledge $25,000 over five years.

Donors in all three societies will receive permanent recognition of their gift inside the building.

“There are many different ways in which you can contribute,” Martin-Vega said. “We are excited that so many of our alumni and friends have already contributed and encourage others to help us reach our goal.”

Keep track of our progress

You can watch work being done at the Fitts-Woolard Hall site by checking out our webcam at camera.ehps.ncsu.edu/eboval.html.

Learn how you can support the College’s work on Fitts-Woolard Hall by contacting Griffin Lamb, assistant dean for development and college relations with the NC State Engineering Foundation, at grlamb@ncsu.edu or 919.515.7458.