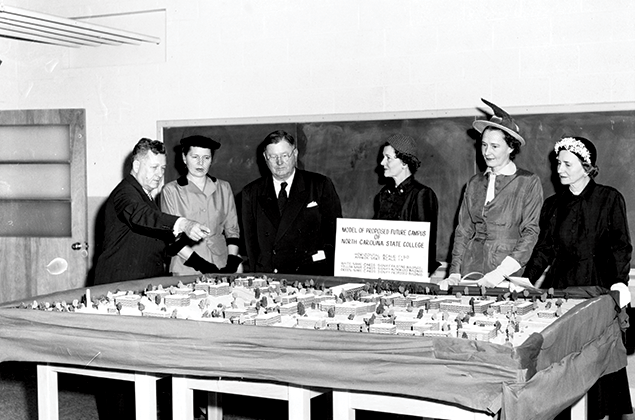 Since its establishment in 1887, the campus of what is now called North Carolina State University has been in a constant state of change and growth, with ideas for expansion and improvement always in the heads of university leaders and on the pages of planning documents. Today is no exception.

A close perusal of the display shows that it leaves out a lot of the sprawling NC State campus that today’s students are familiar with, including Centennial Campus.

The College of Engineering is in the middle of a move from North Campus to Centennial Campus that has been a university priority for two decades. Six of the College’s nine primary departments have made the move and the Department of Civil, Construction, and Environmental Engineering and the Edward P. Fitts Department of Industrial and Systems Engineering will be next, when the new Engineering Oval building is completed.

The plan is for the entire College to eventually move to Centennial Campus, save for the nuclear reactor in Burlington Labs. That’s staying put.

Click here to learn about the fate of the buildings that long lined ‘Engineering Row’ (now Stinson Drive) and how they will be used as the College completes its move to Centennial. What’s next for the building where you took engineering classes?

You’ll learn that Riddick, where this photo was taken and the home at various times of chemical, materials, industrial and mechanical engineering, is now occupied by the Department of Physics and the Department of Animal Science.

Also, find out what will replace Harrelson Hall, the recently demolished circular wonder named after the man showing off a bigger, better NC State in this photo. Harrelson, a mechanical engineering graduate, was the first alumnus of NC State to serve as its chancellor.