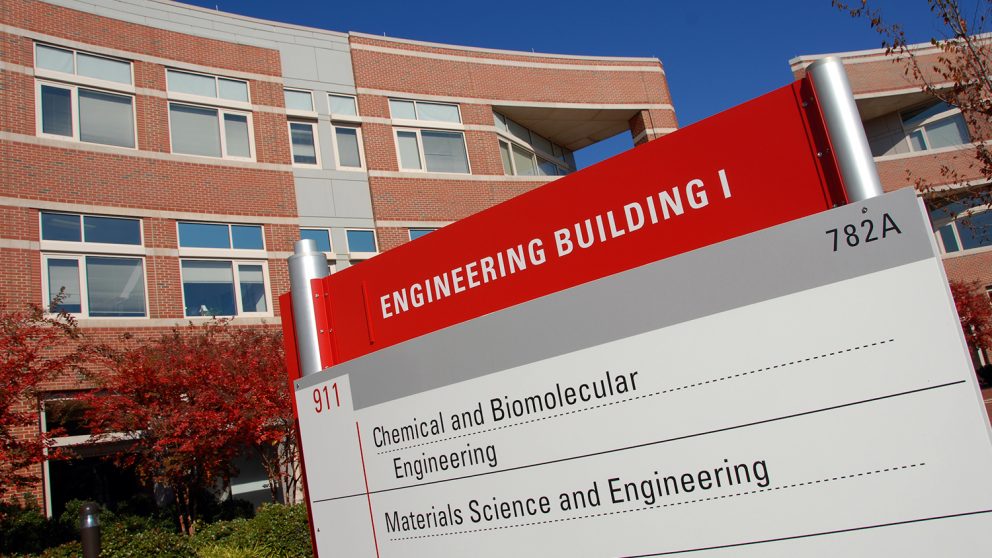 Room 3010 in Engineering Building I on NC State’s Centennial Campus is occupied by the head of the Department of Materials Science and Engineering (MSE).

Dr. Donald Brenner, Kobe Steel Distinguished Professor and MSE department head, is the current occupant. Gerald Kriegel hopes that whomever sits in that office adopts an open-door policy for students. After all, that’s what his father did.

Dr. William Wurth Kriegel spent 32 years at NC State as an instructor, professor and then department head in the Department of Ceramic Engineering, which grew into today’s MSE.

“It was largely in that one room, supporting students,” Gerald Kriegel said of his late father’s office, and the career he made occupying it.

Wurth Kriegel always made students a priority and always wanted them to feel comfortable visiting him in his office. So, in making a donation to support MSE and put his father’s name on the department head’s office, Gerald Kriegel hopes that its occupant will do the same.

Wurth Kriegel enjoyed teaching, primarily graduate students, his son said. But he also enjoyed the research and the administrative duties that went along with the department head position.

Ceramic engineering was not as large a department on campus in those days as the departments of civil, mechanical and nuclear engineering.

Today, it’s still one of the College of Engineering’s smaller departments but in the last few years has seen a marked increase in research expenditures, faculty hiring, enrollment and national rankings.

“It’s in a smaller arena. They’re excellent in that smaller arena,” Gerald Kriegel said in describing his motivations for supporting the department.

A native of Seattle, Wash., Wurth Kriegel earned bachelor’s degrees from the University of Washington and a master’s degree from the Montana School of Mines before earning a Ph.D. in ceramic engineering from the Technische Hochschule in Hanover, Germany.

After returning to the United States, he served as an instructor at Montana School of Mines. In 1939, he and his wife, Evelyn, moved to Raleigh, where he took a position as an instructor at North Carolina State College. Duty called in 1941, though, and Kriegel served as a first lieutenant and later lieutenant colonel in the Army Artillery during World War II. He returned to campus after the war and was named head of the Department of Ceramic Engineering in 1946.

An authority on the mechanical properties of ceramic materials, Wurth Kriegel was a charter member of Keramos, the professional ceramic engineering fraternity, and a Fellow in the American Ceramic Society. He helped found the University Conference on Ceramic Science and served as a consultant to several private companies and governmental agencies, including the Atomic Energy Commission’s Oak Ridge National Laboratory and the U.S. Army’s Office of Ordnance Research. Kriegel retired from the NC State faculty in 1971 and died in Seattle in May 1980.

Gerald Kriegel grew up in Raleigh’s Hayes Barton neighborhood and earned a degree in civil engineering from NC State as an ROTC student and commissioned second lieutenant. After graduation, he worked for DuPont at facilities in South Carolina and Tennessee before entering the Army as an artillery officer.

After his service, Gerald Kriegel worked in the construction industry as an area designer. In 1969, he and his wife, Penny, moved to Massachusetts, where he started two companies: Concrete Structures, Inc., specializing in the erection of precast prestressed concrete structures throughout the Northeast, and Newspan, specializing in bridge work.

Kriegel retired in 2015 and the couple now live in Plymouth, Mass.

Gerald Kriegel remembers his father as a man of integrity who was tenacious in his efforts to make sure that things were done the right way.

“I owe him a lot,” Gerald Kriegel said.

The online engineering master’s program offered by North Carolina State University was ranked seventh nationally by US News & World Report in the publication’s 2020 list of the Best Online Programs.

The College of Engineering at NC State is mourning the loss of Bahareh Karami, an alumna who was killed in a plane crash in Iran on Wednesday.