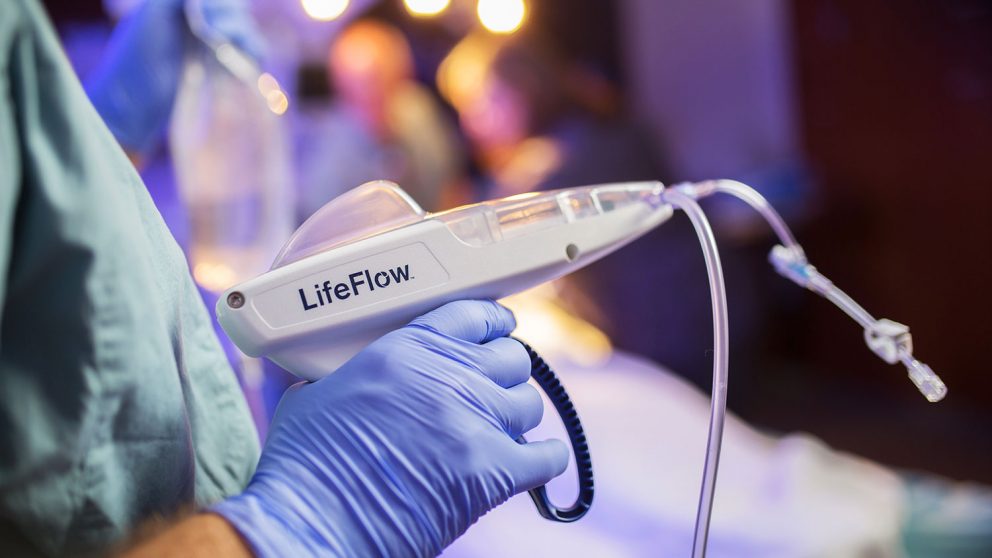 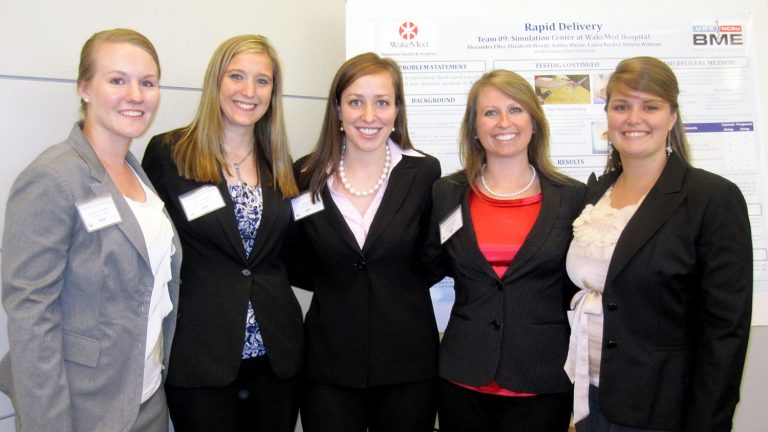 Before they started work on developing a medical device, the five women had a plan: to work together.

Students in Dr. Andrew DiMeo’s senior design class in the UNC/NC State Joint Department of Biomedical Engineering (BME) fill out a survey early in the year-long class. The data gathered informs how students in the class will be divided into teams for the year.

Dr. Elizabeth Davenport, Alexandra Eller, Denise Witman, Laura Johnson and Ashley Hayes had connected during their sophomore year. So as their senior year began in fall 2010, they tried to figure out DiMeo’s algorithm to self-select their group.

“We kind of worked the system a little bit because we had worked well together all through undergrad,” Davenport, now a postdoctoral researcher at the University of Texas Southwestern Medical Center, said.

The team was assigned to shadow nurses and physicians at WakeMed Hospital in Raleigh, where they were introduced to Dr. Mark Piehl, a pediatric intensive care physician.

Piehl had identified a problem and had been thinking about solutions. Intraosseous infusion, the standard method for giving a large amount of saline or other fluids by using a syringe to push it into bone marrow rather than a vein, is slow, inefficient and carries a number of risks. What if there were a better way?

“I thought, why don’t we take that concept of multiple strokes of a syringe and package it into something that’s easy to understand, easy to use and gets the job done quickly by one provider anywhere, whether it’s in a helicopter, an ambulance or in a hospital,” he said.

Piehl had been approached about working with senior design teams before but had felt that he was too busy. This time he decided to collaborate with the five women from the NC State design team to develop a new device based on his concepts. With Piehl’s guidance and collaboration, the team set out to develop an initial prototype. 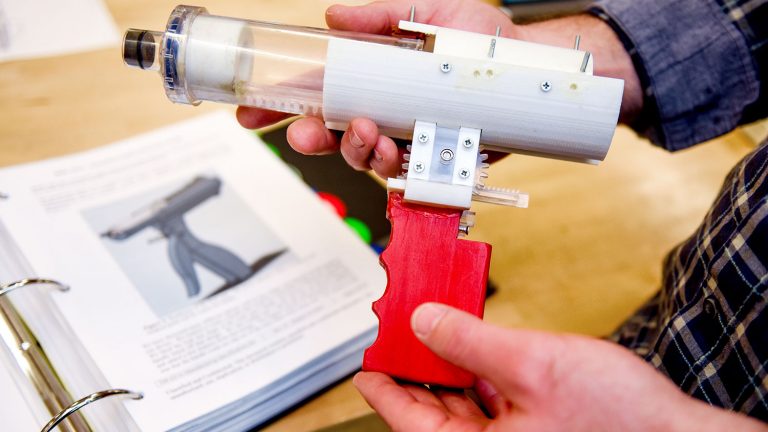 At the end of their senior year, the students presented a prototype of a device that would deliver the fluid faster and could be used by a single person instead of two.

As a result of the ideas generated from this collaboration and other work outside the University, Piehl founded a company called 410 Medical. The company ultimately developed and launched the LifeFlow® rapid infuser that includes some concepts from the original design. LifeFlow makes fluid delivery faster, simpler and more controlled. The Food and Drug Administration has cleared the device for saline delivery, and it is being tested in hospitals around the country.

While the five students have moved on to careers in the medical device field and graduate studies, they say their senior design work provided valuable lessons that helped shape their careers and post-graduate studies and was an important experience.

“I was really proud of being able to work with women,” Hayes, now a research and design (R&D) engineer with medical device maker Cook Medical, said. Johnson is also an R&D engineer with Cook.

Based in part on the work that was done by Hayes and her teammates, a patent application was submitted in 2014. Per University policy, the students’ rights were assigned to NC State, but if the patent issues, both the students and the University will be compensated.

“I didn’t know when I was a senior that I would help develop a medical device that would go to market five years later,” said Eller, now a global product manager with Teleflex, an international medical device company. 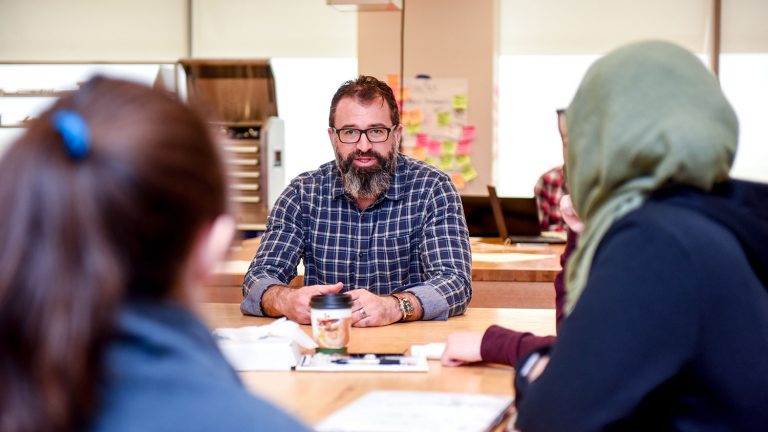 When the five students began talking to nurses at WakeMed about the existing method for intraosseous infusion, they knew they’d been given an important problem to solve.

“Everybody jumped in and said ‘oh yes, it’s so hard,’” Witman, who now works for device maker Ottobock HealthCare as a marketing manager in its orthotics division, remembers. “You had two nurses doing a job that was not very efficient.”

The team surveyed WakeMed nurses and EMT technicians across the state. They conducted tests on pig legs, which provide a close model of the human tibia. They built a prototype using SolidWorks design software and a 3D printer.

Each year, DiMeo has senior design students shadow medical professionals and question them about their problems and needs. The students then conceptualize, prototype and test devices that offer solutions.

DiMeo, an associate professor of the practice in the department, says the class’ “sweet spot” is creating fairly simple, high-volume, single-use devices. Teams from senior design have developed a rapid chilling device that cools saline during the infusion process to induce therapeutic hypothermia, a communication platform for patients with disabilities and a urinary catheter that reduces the risk of patient infection.

In most cases, DiMeo said, the great ideas that come out of his course end with graduation. Most students, armed with a valuable degree from a rigorous biomedical engineering program, have graduate school or the opportunity for a great first job in industry on their mind.

“Somebody has got to keep the torch alive,” he said. “Unfortunately, most often nobody does it.”

The LifeFlow rapid infuser resembles a laser gun from a science-fiction movie. A single front line clinician can infuse 500 milliliters of fluid into a patient in 2.5 minutes.

It’s a simple solution to a complex and important problem, which begs the question of why it hadn’t been done before.

Piehl identified a tendency among medical professionals to assume that the tools available are the best that they could be. And there are several barriers to producing a new medical device, which Piehl discovered when he tried to push the idea forward.

After the five women presented their work and graduated, Piehl let the idea sit for about a year, undecided on how to move it forward. Eventually, he mentioned it to an acquaintance with experience in medical device development who offered help and encouragement. Piehl founded 410 Medical in 2013. Less than 12 months after hiring its first employee, the company had submitted its rapid infuser to the FDA for clearance.

LifeFlow is being used in more than 20 hospitals around the country and will soon be tested in ambulances. 410 Medical, based in the Research Triangle Park, has 14 employees. Piehl works part-time as the company’s chief medical officer and part time as a practicing physician.

Robertson, who brought 15 years of medical device operations and research experience with him to the company, said it’s very unusual for a practicing physician to found a medical device company. The barriers to entry are often too high.

Piehl identified the work put in by those five BME seniors as an important turning point that helped turn an idea into a life-saving product.

“The work required to develop the initial prototype was daunting. The NC State team was instrumental in getting there.”

Harald Ade from the Department of Physics and Aram Amassian from the College of Engineering were named to a list of the world’s most highly cited researchers.

Biomechanics and design might seem like separate fields. But Alyssa Cox is mixing those two passions to find a career in athletic apparel and footwear innovation