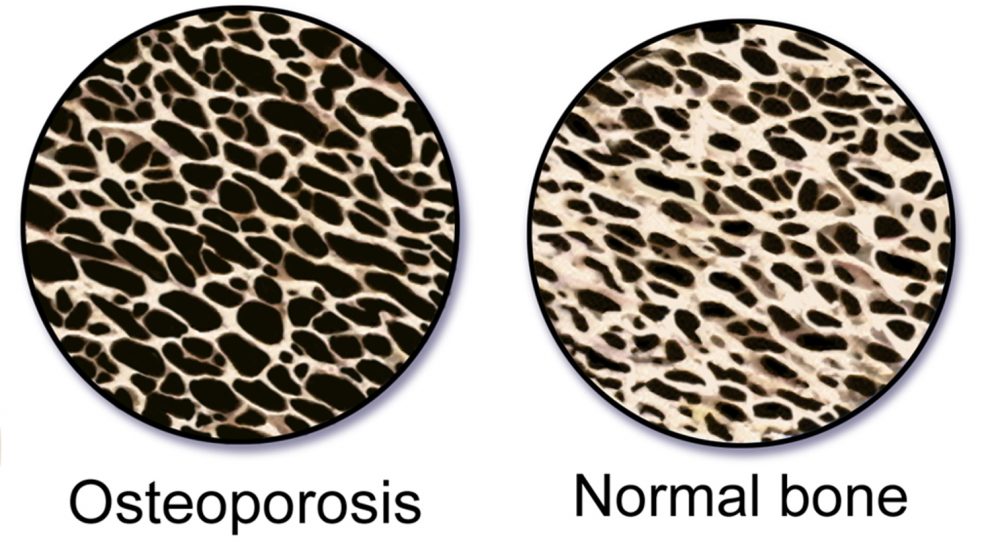 Ultrasound cannot give us clear images of bone. But the pores that make imaging difficult also allow ultrasound to collect data on the bone's microstructure, potentially differentiating between healthy bone and osteoporosis. Image includes details from animation produced by Blausen Medical. Shared under a Creative Commons license. Click image for more information.

A new ultrasound technique provides a non-invasive way of assessing bone structure on the microscale. Researchers hope to fine-tune the technique for use in assessing osteoporosis risk and treatment.

Researchers have also demonstrated that a variation of the same technique can distinguish between tumors and healthy tissue in a study using laboratory rats.

“One thing that’s exciting about these techniques is that we’ve taken one of ultrasound’s shortcomings and turned it to our advantage,” says Marie Muller, an assistant professor of mechanical and aerospace engineering at North Carolina State University and corresponding author of papers on the two studies.

The shortcoming is the fact that ultrasound cannot give us clear images when used in complex media, such as bone. That’s because the ultrasound waves bounce all over the place in these complex environments, making it impossible to calculate how far they’ve traveled.

“In bone, for instance, sound waves will travel through the solid parts of the bone and then scatter whenever they hit a pore,” Muller says. “We found that this is a useful way to assess a bone’s microstructure.”

Muller and her collaborators theorized that by looking at the rate at which ultrasound waves diffused from a bone site, they can assess both the number of pores in a given area – or pore density – and the size of those pores.

“The proof-of-concept paper we just published finds that there is a consistent correlation between the diffusion constant and bone pore size and density,” Muller says. “However, it’s worth noting that this was done in a computational model. We’re currently doing an in vivo study with human patients and an in vitro study with human bone.

“We are at least years from clinical applications, but if the results hold up, we may have a way to monitor patients on a regular basis to determine the health of the bone. That means people can track their potential risk for osteoporosis without having to worry about the radiation exposure associated with X-rays. In addition, the technique could help researchers and health care providers determine the effect of osteoporosis treatment efforts.”

Because the research is ongoing, no clear protocols have been established, making it difficult to estimate cost – though it would likely be comparable to existing ultrasound assessment applications, and much cheaper than high resolution CT scanning.

Muller also led a study that used a nearly identical technique to try to distinguish between healthy soft tissue and solid tumors in a rat model.

The tumor study made use of microbubbles injected into the vasculature of lab rats. Because bubbles cause ultrasound waves to scatter – just like pores in bone – ultrasound can track changes in the density of microbubbles as they travel through a rat’s network of blood vessels.

Because tumors create networks of blood vessels that are denser and more complex than what is found in healthy tissue, researchers found that they could identify tumors by looking for areas where the microbubbles were slow to diffuse.

“We’re excited about this finding, and are hoping to secure funding that would allow us to move forward with this line of research,” Muller says.

The paper on bone microstructure, “Acoustic diffusion constant of cortical bone: Numerical simulation study of the effect of pore size and pore density on multiple scattering,” was published Aug. 8 in The Journal of the Acoustical Society of America. Co-lead authors of the paper are Yasamin Karbalaeisadegh and Omid Yousefian, who are grad students at NC State. The paper was co-authored by Gianluca Iori and Kay Raum of Charité Universitätsmedizin Berlin. The work was done with support from the National Institutes of Health, under grant number R03EB022743, and by the Deutsche Forschungsgemeinschaft.

The paper on tumors and soft tissue, “Ultrasound multiple scattering with microbubbles can differentiate between tumor and healthy tissue in vivo,” was published May 31 in the journal Physics in Medicine & Biology. Lead author is Kaustav Mohanty, a grad student at NC State. The paper was co-authored by Virginie Papadopoulou, Isabel Newsome, Sarah Shelton and Paul Dayton of the Joint Department of Biomedical Engineering at NC State and the University of North Carolina at Chapel Hill. The work was done with support from the National Institutes of Health under grants R01CA170665, R44CA165621, R03EB022311 and R01CA189479.

Published: Aug. 8, The Journal of the Acoustical Society of America

Abstract: While osteoporosis assessment has long focused on the characterization of trabecular bone, the cortical bone micro-structure also provides relevant information on bone strength. This numerical study takes advantage of ultrasound multiple scattering in cortical bone to investigate the effect of pore size and pore density on the acoustic diffusion constant. Finite-difference time-domain simulations were conducted in cortical microstructures that were derived from acoustic microscopy images of human proximal femur cross sections and modified by controlling the density (Ct.Po.Dn) ∈[5-25] pore/mm2 and size (Ct.Po.Dm) ∈[30-100] µm of the pores. Gaussian pulses were transmitted through the medium and the backscattered signals were recorded to obtain the backscattered intensity. The incoherent contribution of the backscattered intensity was extracted to give access to the diffusion constant D. At 8 MHz, significant differences in the diffusion constant were observed in media with different porous micro-architectures. The diffusion constant was monotonously influenced by either pore diameter or pore density. An increase in pore size and pore density resulted in a decrease in the diffusion constant (D?=285.9Ct.Po.Dm-1.49, R2=0.989, p=4.96×10-5, RMSE=0.06; D=6.91Ct.Po.Dn-1.01, R2=0.94, p=2.8×10-3, RMSE=0.09), suggesting the potential of the proposed technique for the characterization of the cortical microarchitecture.

Published: May 31, Physics in Medicine & Biology

Abstract: Most solid tumors are characterized by highly dense, isotropic vessel networks. Characterization of such features has shown promise for early cancer diagnosis. Ultrasound diffusion has been used to characterize the micro-architecture of complex media, such as bone and the lungs. In this work, we examine a non-invasive diffusion-based ultrasound technique to assess neo-vascularization. Because the diffusion constant reflects the density of scatterers in heterogeneous media, we hypothesize that by injecting microbubbles into the vasculature, ultrasound diffusivity can reflect vascular density (VD), thus differentiating the microvascular patterns between tumors and healthy tissue. The diffusion constant and its anisotropy are shown to be significantly different between fibrosarcoma tumors (n=16) and control tissue (n=18) in a rat animal model in vivo. The diffusion constant values for control and tumor were found to be 1.38±0.51 mm2 µs-1 and 0.65±0.27 mm2 µs-1, respectively. These results are corroborated with VD from acoustic angiography (AA) data, confirming increased vessel density in tumors compared to controls. The diffusion constant offers a promising way to quantitatively assess vascular networks when combined with contrast agents, which may allow early tumor detection and characterization.