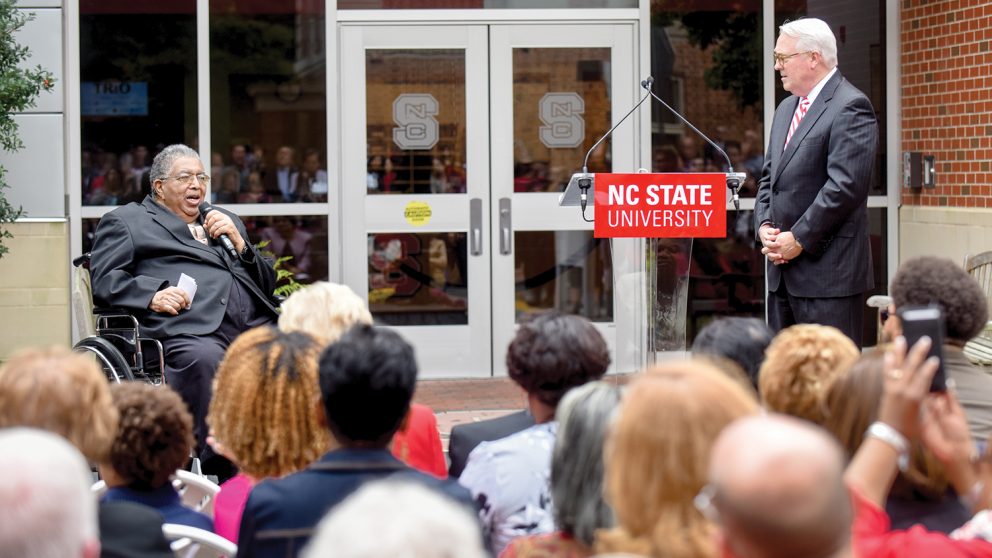 There was a time not too long ago when Irwin Holmes, Jr. would not have been allowed to attend classes at NC State.

In fall 2018, the University named a building for him.

When Holmes graduated with a bachelor’s degree in electrical engineering in 1960, he was the first African American to receive an undergraduate degree from the University. He also broke barriers as the first African American to compete as an athlete, win a varsity letter and co-captain a varsity team in the Atlantic Coast Conference as a member of NC State men’s tennis team.

In September 2018, the NC State Board of Trustees approved changing the name of University College Commons to Holmes Hall.

Holmes and his family attended a dedication ceremony for the renaming held on Nov. 1, 2018, during Red and White Week. Joined by NC State Chancellor Randy Woodson, Director of Athletics Debbie Yow and Dean of Engineering Louis Martin-Vega, Holmes spoke of how his experiences at NC State helped set him up for a successful career.

“I may have contributed something to NC State, but NC State has contributed a whole lot to me and made my life very special,” Holmes said.

Holmes, who also earned a master’s degree in electrical engineering from Drexel University, worked for several companies before working for IBM for 19 years until his retirement. As a senior manager of computer development at IBM, he received two patents and was a key member of the task force that led to the development of the IBM PC product line.

He has also been an entrepreneur who developed a shopping center in Durham, NC, started a gourmet restaurant, and founded a staffing company with his wife, Meredythe.

Kenfield and Holmes’ teammates welcomed him and stood united against the prevalent forces of segregation. Throughout his career, Holmes wasn’t allowed to compete in South Carolina, which had an unwritten rule barring interracial athletic competition. Kenfield arranged for all matches against Clemson and the University of South Carolina to be played in North Carolina.

When the team stopped for a meal at a diner outside Chapel Hill after a match against UNC, the owner told Kenfield that he wouldn’t serve Holmes. The coach and the entire team got up and walked out.

Holmes said much of what he achieved in his career came from a class he took his senior year that detailed how to build a computer. When he graduated, Stevenson recommended him for his first job, with RCA in Camden, New Jersey.

Over the years, Holmes worked with many accomplished engineers and supervised quite a few. He said his NC State education served him well.

“Let me tell you something, there’s no better engineer than at NC State,” he said.