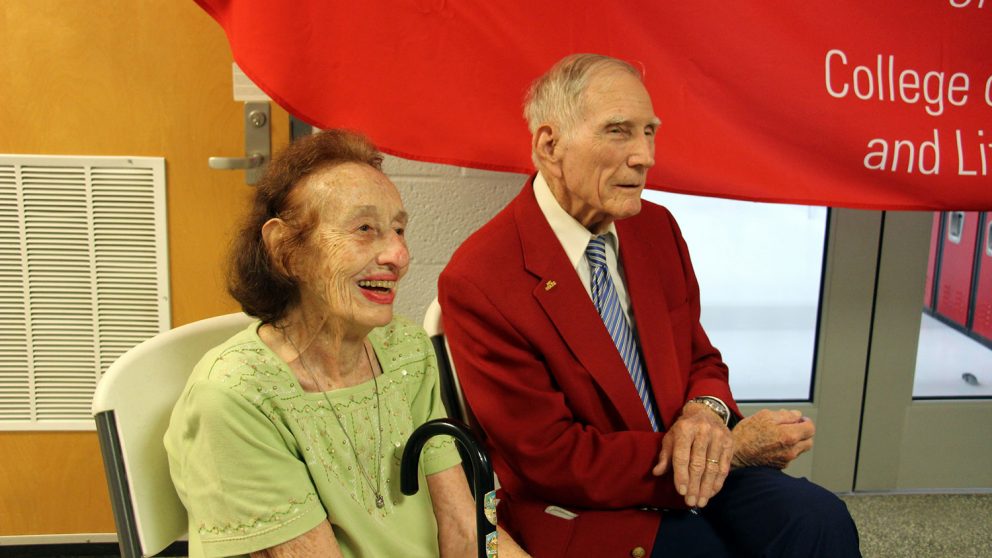 If it’s Friday in the halls of Weaver Labs, home to the Department of Biological and Agricultural Engineering, you can usually count on at least one thing: a flower delivery from professor emeritus Charlie Suggs.

Most weeks you can spot him making his way to NC State with a plastic shopping bag – or two – of flowers in hand. He delivers fresh camellias, hydrangeas or whichever flower is in season and plucked straight from his garden to anyone he sees along the way in Weaver. Known for his humor and seemingly endless knowledge, Suggs takes the time to say hello and grab coffee with former colleagues. But his impact to the department and university reaches far beyond these weekly visits.

Celebrating A legacy of impact

Charlie Suggs spent his 90th birthday in the same way he had spent many other days of his life: making a lasting impact to the Department of Biological and Agricultural Engineering (BAE). With the signing of the Charles W. Suggs Distinguished Professorship in Biological and Agricultural Engineering Endowment, Dr. Suggs and his wife, Jane, created a named endowed professorship in the department.

“This endowed professorship will make a long-lasting impact on our department. It immediately increases the prestige of the program and allows us to recruit and retain the very best faculty members,” Fox explained. “The endowment allows our outstanding faculty, professionals, and students the opportunity to create and utilize the most recent technological advances in Biological and Agricultural Engineering.”

After receiving a bachelor’s and master’s degree from BAE, Suggs, a native of Whiteville, NC, was also the department’s first Ph.D. graduate in 1959. Before joining the faculty, he spent several years in industry working for Dearborn Motors, International Harvester and the North Carolina Agricultural Experiment Station. He returned to Weaver Labs in 1953 to begin graduate school and joined the faculty in 1954 until his retirement in 1993 as professor emeritus.

During those 40 years on faculty, his major research interests included mechanization of tobacco harvesting and planting. He is still known as a pioneer in ergonomics and the effects of vibrations and other environmental factors on human response and performance.

He is also well known for his contribution in developing the world’s first tobacco leaf harvester utilizing the patented rubber leaf stripper, which is widely employed on current commercial harvesters. To further mechanize the harvesting operation, he developed a process in which the leaves are conveyed into box-like structures to hold them for presentation to the curing environment.

If it had to do with increasing farm efficiency while improving the life of the farmer, chances are Suggs was involved.

Before signing the endowment, Fox presented Charlie and Jane Suggs with a token of BAE’s gratitude. The newly renovated lab space where Suggs taught for all of those years was named in his honor: The Suggs Laboratory for Precision Agriculture and Machine Systems.

The day culminated in a 90th birthday celebration for Suggs complete with his request: strawberry cake. Former students and colleagues took time to share stories about their time with Dr. Suggs and give insight into the man who inspired so many.

And in years to come, the contribution made by Charlie and Jane will continue to make a lasting impact.