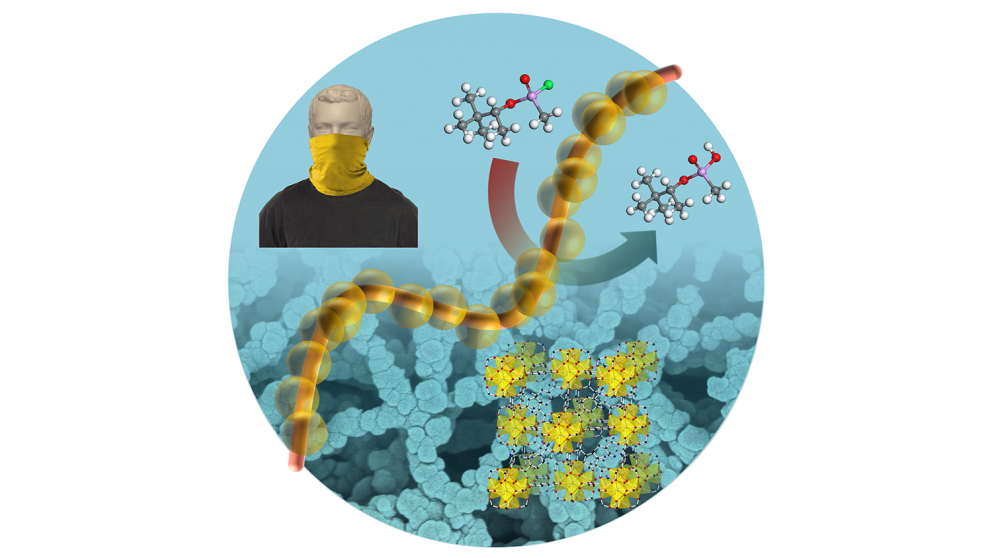 Researchers have created a fabric material containing nanoscale fibers that are capable of degrading chemical warfare agents (CWAs). Uniform coatings of metal-organic frameworks (MOFs) were synthesized on top of the nanofibers, forming unique kebab-like structures. These MOFs are what break down the CWAs, rendering them harmless.

“Current technologies for addressing CWAs rely on carbon-based materials — but these carbon materials can only adsorb hazardous compounds, they can’t degrade them,” says Dr. Junjie Zhao, a former Ph.D. student in chemical engineering and lead author of a paper on the work. “Our goal was to develop new materials that can detoxify these CWA compounds, and we’ve been successful.” The CWA degradation research was conducted by researchers in Dr. Gregory Parsons’ research group in the Department of Chemical and Biomolecular Engineering, and collaborators at RTI International and the Edgewood Chemical Biological Center.

“Previous research had found that MOFs can be effective at degrading CWAs,” Zhao says. “However, MOFs normally come in the form of a powder. We wanted to see if we could grow MOFs as functional coatings onto fibers, so that they could be used in masks, filters and protective garments.”

“We think that this demonstration of well-controlled MOF thin films that retain their chemical functionality is an important step for personal security and has implications for many other civilian and commercial uses,” adds Parsons.

The researchers begin by depositing a thin film of titanium oxide onto a fabric made of nanoscale fibers using a vapor-phase technology called atomic layer deposition. The titanium oxide serves as a nucleation layer, which enables the researchers to apply various zirconium-based MOFs onto the nanofibers in an evenly distributed way.

“We found that the MOFs formed on the nanofibers in a kebab-like structure, with the MOFs uniformly covering the entire nanofibers, like meatballs on a skewer,” Zhao says.

Next steps include integration of the MOF-nanofiber kebab structures into currently fielded garment and suit materials and evaluating the durability of the materials in various conditions.