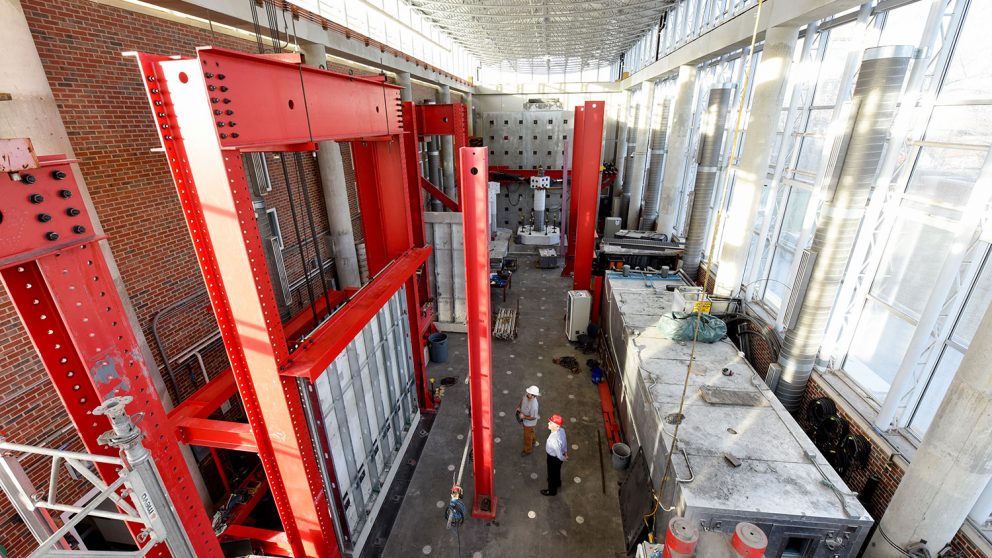 It’s the job of researchers in the CFL to break things. And they enjoy it. The facility on NC State’s Centennial Campus enables research, development and testing of construction materials and structural systems at full scale. Whether it’s a bridge beam, a parking deck column or a concrete wall, the facility’s 4,500-square-foot structural testing floor can probably handle it. If not, Dr. Sami Rizkalla, CFL director and Distinguished Professor of Civil Engineering, has set aside space behind the facility to test outdoors.

The CFL is equipped to simulate real loading conditions as seen in the field, but takes those conditions to an extreme to produce a failure. Then the structures are repaired and tested again. The materials tested range from concrete and steel to wood and masonry. The information gleaned leads to a better design that will head off such failures in the structure once it’s built. To do it, CFL staff use 14 actuators that can exert up to 500,000 pounds of force each. Two 20-ton overhead cranes are used to move these large structures around. In order to provide real-world conditions, a 160-square-foot environmental chamber adds temperatures as high as 180 degrees Fahrenheit and as low as minus 60, and a steady saltwater spray to the loading. A shake table simulates the impact of an earthquake on a structure. The structural testing floor is built on top of a two-foot concrete slab and a nine-foot-deep basement beneath. That basement itself sits atop a two-foot concrete slab. In the basement, you will find long-term tests that provide years of pressure on a structure to study creep, time-dependent deformation of a material.

As CCEE department head in the late 1970s, when plans were made for an Engineering Graduate Research Center, Dr. Paul Zia pushed for research space large enough to enable full-scale structural testing.

That dream came closer to becoming a reality when the state allocated land for Centennial Campus in the mid-1980s. The original plan called for space in the basement of what is now the main building of the Monteith Research Center (MRC) on Centennial, but the plan was changed. The CFL was put on a separate foundation and as an annex to MRC to prevent the experimental work at CFL from interfering with the precision measurements in the main building. The CFL opened in 1996 with joint funding from the National Science Foundation (NSF) and the state of North Carolina. Rizkalla, once a graduate student advised by Zia, joined as director in 2000 after serving as director of a Canadian Center of Excellence focused on innovative structures and smart sensors.

Today, the center is self-supporting (including salaries and equipment) using funding from a wide range of sources. Research projects come from Korea, Japan, Germany and Canada; the NSF; and businesses and departments of transportation from around the United States.