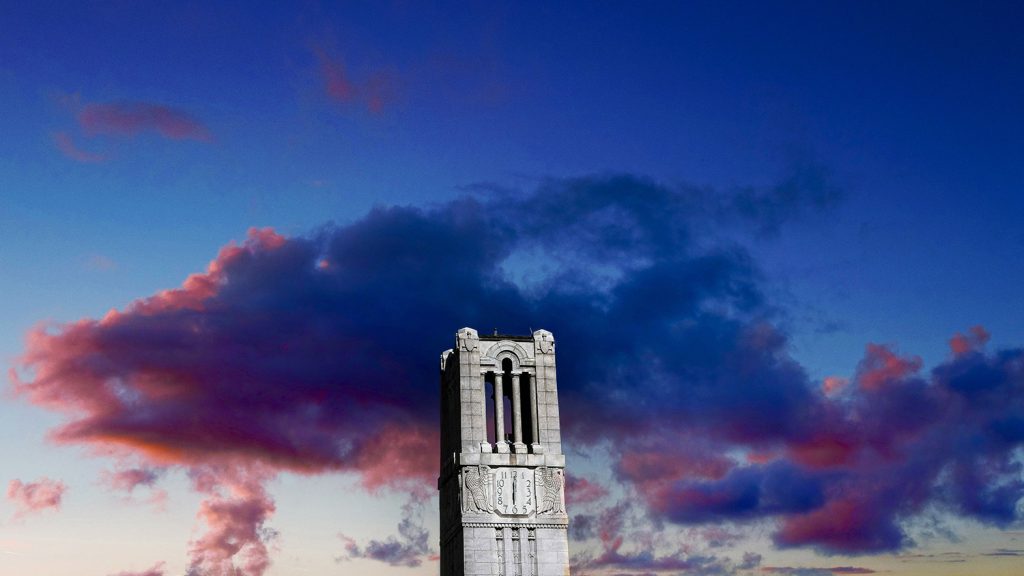 The College of Engineering turned out strong for North Carolina State University’s Day of Giving 2021 on March 24, raising more than $6 million from 1,615 gifts — both records for the College.

As alumni, faculty and staff members, and friends of the College came together in support of their favorite department, program or fund, they helped drive NC State to a record-setting day. Overall, the University raised $58 million from more than 14,000 gifts, setting a national record for dollars raised during a college or university giving day, according to the consulting firm State of Wow. The previous record for the highest total funds raised during a single day was held by Purdue University, when $42 million was raised in 2020. 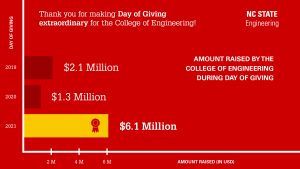 Day of Giving is a 24-hour fundraising campaign to raise money to support the University’s world-class research, develop new opportunities and improve existing programs for students. Now in its third year, NC State has seen a rise in giving every year since 2019. Remarkably, the 2021 record-setting total comes just six months after the 2020 Day of Giving, which was postponed to September due to the COVID-19 pandemic.

Competing against other colleges and units at NC State, the College won two of the hourly challenges — most gifts made from 12-1 a.m. and the “Show Us Your Wolfies” photo challenge — earning an extra $3,500. Despite spending a good portion of the day at the top of the leaderboard for total funds raised, the College was runner-up for both total funds and number of gifts.

Throughout the day, the College’s nine academic departments engaged in a friendly competition, trying to receive the most gifts to win a greater share of $15,000 in prize money from Dean Louis Martin-Vega. The Department of Civil, Construction, and Environmental Engineering (CCEE) won, with 234 gifts, closely followed by the Edward P. Fitts Department of Industrial and Systems and Engineering (ISE) with 221 and the Department of Mechanical and Aerospace Engineering (MAE) with 193.

These three departments — MAE, CCEE, and ISE — also competed amongst each other to see which would receive 150 gifts first. While CCEE reached its 150 gifts matching challenge first, all three departments made their challenge, receiving extra funds from their departmental advisory boards.

In addition to the departmental funds, alumni and supporters also made gifts to programs and research centers. The College’s Women and Minority Engineering Programs received their highest total ever on a Day of Giving, raising $34,500.

The College is grateful to everyone who participated in this year’s Day of Giving. The incredible support will have an impact for future engineers and computer scientists for generations to come.