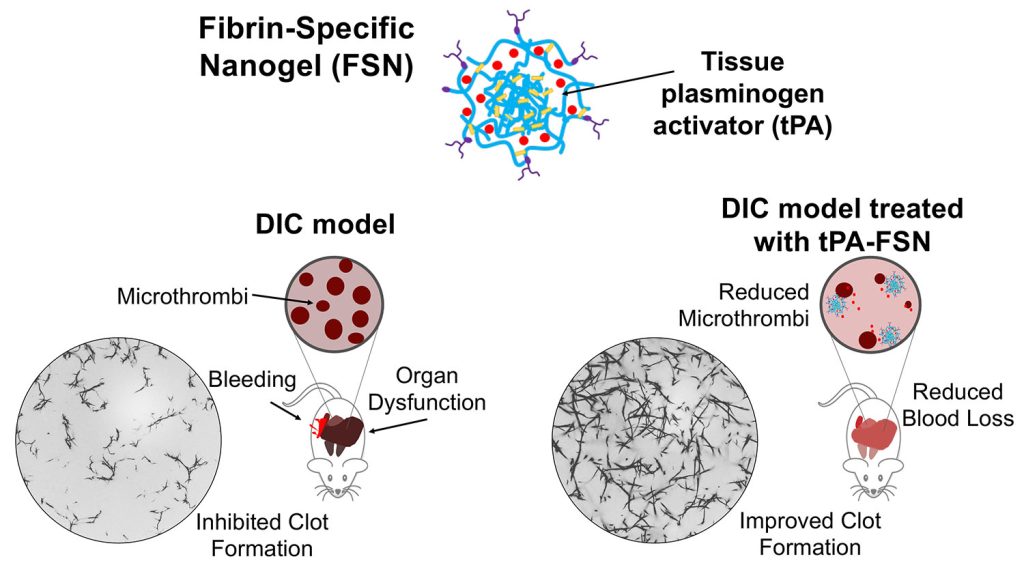 Researchers have developed a new tool for addressing disseminated intravascular coagulation (DIC) – a blood disorder that proves fatal in many patients. The technology has not yet entered clinical trials, but in vivo studies using rat models and in vitro models using blood from DIC patients highlight the tech’s potential.

“DIC basically causes too much clotting and too much bleeding at the same time,” says Ashley Brown, corresponding author of a paper on the work. “Small blood clots can form throughout the circulatory system, often causing organ damage. And because this taxes the body’s supply of clotting factors, patients also experience excess bleeding. Depending on the severity of DIC, between 40% and 78% of patients with DIC die.

“DIC is associated with a number of other conditions, such as sepsis and cancer – and it is very difficult to treat,” adds Brown, who is an assistant professor in the Joint Department of Biomedical Engineering at North Carolina State University and the University of North Carolina at Chapel Hill. “Doctors often focus on trying to treat underlying condition. But if the DIC is bad, doctors face a dilemma: if they treat the bleeding, they’ll make the clotting worse; if they treat the clotting, they’ll make the bleeding worse. Our goal is to find a clinical intervention that addresses this dilemma. And our results so far are promising.”

Brown and her collaborators have developed a technique that makes use of nanogel spheres. The spheres are engineered to bind to a protein called fibrin, which is the main protein found in blood clots. As a result, the spheres will travel through the bloodstream until they reach a blood clot, at which point they will stick to the fibrin in the clot.

These nanospheres are about 250 nanometers in diameter and are porous. In this case, the researchers have loaded the nanospheres with tissue-type plasminogen activator (tPA) – a drug that breaks down clots.

“Based on in vitro testing and testing in a rat model, we found that where you have pre-formed clots (not active bleeding) that the tPA spheres stick to fibrin and break up the clots,” says Emily Mihalko, first author of the paper and a Ph.D. candidate in the joint biomedical engineering department. “Breaking up these clots also releases other clot constituents, such as platelets, which evidence suggests may be re-recruited by the body at active clotting sites (i.e., places where there was actually bleeding).”

“We also did in vitro testing using blood plasma from patients with DIC, and found similarly promising results,” Brown says.

“We are currently exploring different dosages in the animal model,” Mihalko says. “And are doing work to better understand how the particles are distributed in the body and how long it takes before they are cleared by the body – which is important information for addressing safety considerations prior to any clinical trials.”

The researchers note that it is too early to put a price tag on any potential treatments that make use of the technology. However, they note that the targeted nanogels mean that treatment would likely involve using smaller doses of tPA than are currently in clinical use.

“The cost of the creating the targeted nanospheres would likely offset the savings from using less tPA, so we suspect it may be comparable to the cost of conventional tPA therapies,” Brown says.

Brown is the founder of SelSym Biotech, Inc., which focuses on developing injectable hemostatic materials. Levy serves on advisory boards for Instrumentation Labs, Octapharma and Merck.

Abstract: Disseminated intravascular coagulation (DIC) is a pathological coagulopathy associated with infection that increases mortality. In DIC, excessive thrombin generation causes symptoms from formation of microthrombi to multiorgan failure; bleeding risks can also be a concern because of clotting factor consumption. Different clinical events lead to DIC, including sepsis, trauma, and shock. Treatments for thrombotic episodes or bleeding presentation in DIC oppose each other, thus creating therapeutic dilemmas in management. The objective of this study was to develop fibrin-specific core-shell nanogels (FSNs) loaded with tissue-type plasminogen activator (tPA) to treat the microcirculatory complications of DIC, which would facilitate targeted clot dissolution to manage microthrombi and the potential consumptive coagulopathy that causes bleeding. FSNs enhance formation of actively polymerizing clots by crosslinking fibrin fibers, but they can also target preexisting microthrombi and, when loaded with tPA, facilitate targeted delivery to lyse the microthrombi. We hypothesized that this dual action would simultaneously address bleeding and microthrombi with DIC to improve outcomes. In vivo, tPA-FSNs decreased the presentation of multiorgan microthrombi, recovered platelet counts, and improved bleeding outcomes in a DIC rodent model. When incorporated with human DIC patient plasma, tPA-FSNs restored clot structure and clot growth under flow. Together, these data demonstrate that a fibrinolytic agent loaded into fibrin-targeting nanogels could improve DIC outcomes.