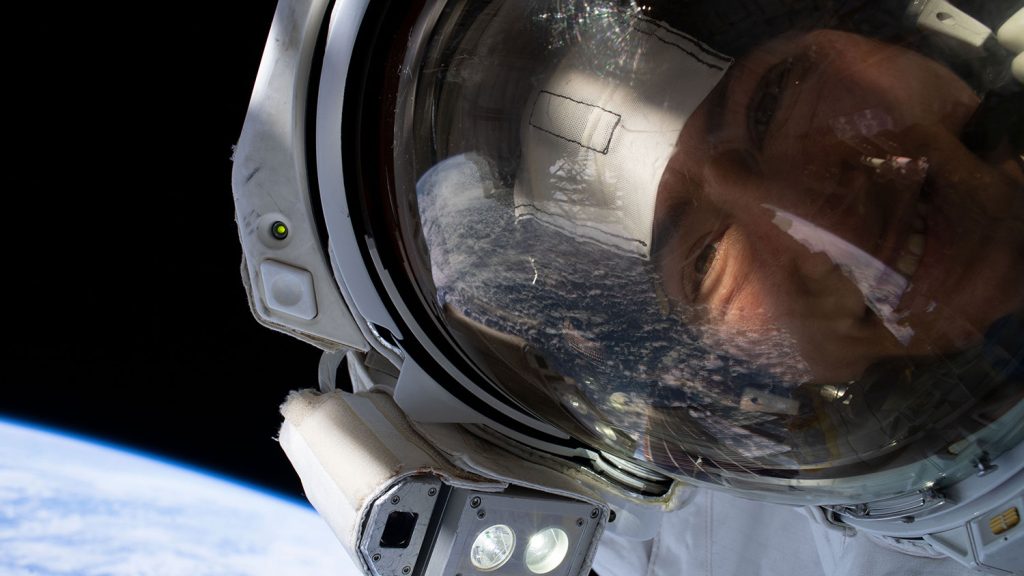 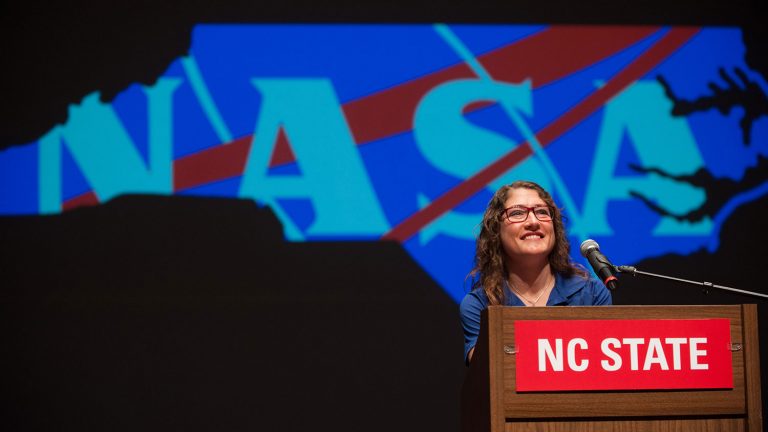 To be honest, it was about the worst thing Christina Koch could have said when she first looked out the tiny window of the Russian Soyuz MS-12 spacecraft that was hurtling away from home toward the International Space Station.

The words had already escaped the three-time NC State graduate’s lips on March 14, 2019, when she realized it might create a bit of concern with her other two commuters, astronauts Aleksey Ovchinin and Nick Hague.

After a record-shattering 328 days, 13 hours and 58 minutes on the space station, with 5,248 orbits around the Earth and 139,053,992 miles traveled, Koch returned to her home planet on Feb. 6, a few days after celebrating her 41st birthday among the stars. She and her fellow astronauts landed in a remote part of Kazakhstan and returned to Houston’s Johnson Space Center later that same day.

She spent the next three days recovering in quarantine. On Feb. 9, 2020, she received clearance from her athletic trainer to enjoy a day at the beach with her husband, Robert, and their dog, LBD (Little Brown Dog), along with copious amounts of chips and salsa, the culinary treat she missed the most while setting the record for the longest continuous spaceflight by a female astronaut.

During a media availability a few days later, Koch discussed her experiences, all the effects of spending nearly a year in microgravity some 250 miles above the Earth’s surface and the critical experiments she conducted on behalf of NASA and other scientists back home.

She talked about her training for such a mission, especially the long hours she spent at NC State’s Carmichael Gymnasium on the indoor climbing wall, the baby belay she needed to pursue her dream.

“It turns out that it is a hobby that just lent itself to some of the challenges that I faced in learning to become an astronaut. It taught me to go out and achieve the things you think are achievable, to believe in yourself and learn the important aspects of teamwork. I constantly relied on that.”

As it turns out, rock climbing is quite similar to space walking, which Koch did throughout her time at the space station. She not only participated in the first three all-female space walks in the history of human space travel with fellow American astronaut Jessica Meir, she spent 42 hours and 15 minutes total on her six scheduled spacewalks.

“NC State is where I discovered that great hobby of mine, as well as the teamwork that it took to do a lot of the projects that I took on as a physics student and an electrical engineering student,” she said. “Working together on a team of people to achieve a common purpose and a common goal was something that I relied on a lot.”

Koch worked on hundreds of experiments, from the mundane to the out-of-this-world. Some surprised her. Who knew growing protein crystals in microgravity could be of such great benefit to the international pharmaceutical industry?

She was constantly busy, if not growing mustard greens in a plant science experiment to share with her fellow space travelers, then taking pictures of the universe from an astronaut’s perspective. She saw a hurricane over her hometown, wildfires in Australia and unbelievable cloud formations on a planetary level.

Live according to your own passions…

“I’m an electrical engineer and physicist, so I love that there’s a lot of physical science things,” said Koch. “I also love computer programming. So, I like the idea that in microgravity we can study things without what we might consider the boundary conditions of 1G.

“Things like capillary action that really allow us and the people investigating those things to kind of gain an edge in the industrial environment where we’re really pushing the limits of how we can be efficient in manufacturing. I love all those experiments as well.”

Going to space fulfilled a dream Koch has had since she was 5 years old, back when she and her family still lived in Grand Rapids, Mich., before they moved to Jacksonville, NC, and before she ever attended the North Carolina School of Science and Math and NC State.

She learned during a trip to Space Camp to push her boundaries and not be scared of risks, no matter how life-threatening.

“I was confident early on that I wanted to be an astronaut,” she said. “I also knew the chances were really, really low… But I knew that I was going to live according to my own passions.”

She remembered when she quit a near-dream job as a NASA engineer to become a research assistant for three-and-a-half years, going between the South Pole and both Arctic and Antarctic extremes.

“That turned out to be one of the greatest experiences I ever had,” she said. “So, live according to your own passions and let those guide you.”