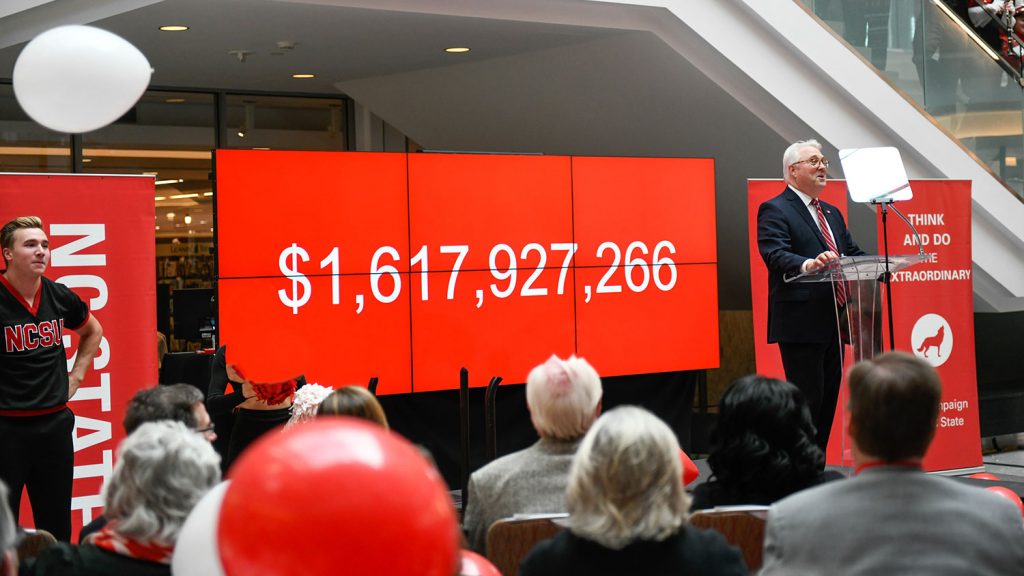 In November 2019, Chancellor Randy Woodson announced that Think and Do the Extraordinary: The Campaign for NC State had met its overall fundraising goal of $1.6 billion two years ahead of schedule.

The College of Engineering established its own goal during the campaign to raise $230 million. Griffin Lamb, assistant dean for development and college relations and executive director of the NC State Engineering Foundation, said that the College, like some other units on campus, is still working to meet its goal, but is close with roughly $15.4 million left to raise.

“We in engineering have seen an incredible response to the areas of greatest need like Fitts-Woolard Hall, but we still have a gap,” Lamb said.

The College’s campaign fundraising priorities include student scholarships, professorships, the construction of Fitts-Woolard Hall and many more areas requiring private, programmatic support, such as the College’s Women and Minority Engineering Programs (WMEP).

With the campaign under way, the University broke ground on the new building in April 2018. Fundraising efforts for the building benefitted from a $25 million gift from alumni Edward P. Fitts, Jr. and Edgar S. Woolard, Jr. It will be home to the Department of Civil, Construction, and Environmental Engineering (CCEE); the Edward P. Fitts Department of Industrial and Systems Engineering (ISE); and the dean’s administrative offices, unifying the College on Centennial Campus.

“I’ve been a strong proponent for a number of years of having Centennial Campus completed,” said S. Frank Culberson, the College’s campaign chair. “I am really pleased at where we are; I think we’ll raise the remaining money in due time.”

Lamb agreed, pointing out that continued support can help the College reach its goal ahead of the official end to the Think and Do the Extraordinary Campaign in December 2021.

“A campaign is about coming together, and so is our move to Centennial Campus,” Lamb said. “Together as one community we’ll forge ahead to finish the building, and to finish our campaign goal of $230 million.”

The success of your College includes your entire College… if we all work together we’ll be more successful.

The College’s success to this point has been about its people. Lamb said the College has seen people step forward with first-time large leadership gifts, as well as many first-time contributors.

At the same time Deborah Young, vice president of the Foundation’s board of directors and an advocate for inclusion of all people at any level of support, said a push for increased openness and transparency brought more people on board during the campaign.

“When people have more knowledge, they have more passion,” she said. “The success of your College includes your entire College — whether it’s $1 or $1 million, if we all work together we’ll be more successful.”

With the fundraising success will come even greater student success. The University announced that support from the campaign means students will benefit from:

Taking the College over the finish line

Within the College, Lamb called the completion of Fitts-Woolard Hall an all-hands-on-deck situation. Though it houses CCEE and ISE, the alumni base as a whole can come together to support the new building, she said. Those who support Fitts-Woolard Hall can choose to receive recognition in their home department’s own building if they prefer.

With less support coming from the state of North Carolina, Lamb said philanthropy has become increasingly important. Everyone is asked to consider giving at a level of personal leadership, Lamb said.

“Sometimes when you have such a large goal, we know it can’t all be on the shoulders of one person,” she said. “Campaigns are never about one person — they are about what we can achieve together to make our College community a stronger academic community.”

It’s important, too, to remember that the effects will be felt beyond NC State, said Nelson Peeler, president of the Foundation board. For Peeler, it’s become a personal passion project for him to see the school succeed and the results it has for the state of North Carolina.

“The business I work in is very engineering intensive; we have a lot of interaction with the University, both from the student standpoint and the University’s research,” said Peeler, who is senior vice president and chief transmission officer for Duke Energy. “We have a stake in the University being successful.

“For businesses and the state of North Carolina, the College of Engineering is a big economic driver,” he said.

Making NC State even more accessible to all

NC State may have met its overall goal, but the University is not done yet — recently reaffirming its commitment to make NC State more accessible for all students.

Currently, more than 72 percent of undergraduates apply for financial aid, and the average need is $16,431. Though it is recognized as a top value in education, the University continues to lose motivated and promising low- to middle-income students to institutions that are better positioned to meet their financial needs.

NC State is asking supporters to answer the call for continued support to aid students, no matter their family background or what corner of the state they call home, in having the opportunity to enroll at NC State.

“We’ve reset our goals to be more inclusive and more effective, to give support to those who really need it,” Culberson said. “We’ve already got some strong scholarships going, we just need more people to step up to the plate.”

Spring/Summer 2020, Think and Do the Extraordinary: The Campaign for NC State