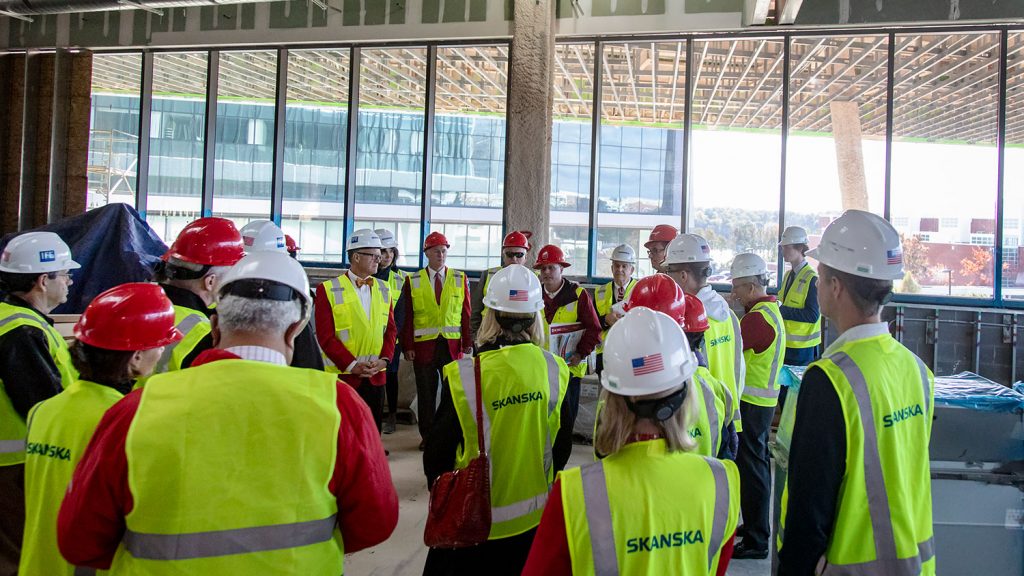 Dr. Richard Nance earned his bachelor’s and master’s degrees in industrial engineering from NC State in the 1960s.

Nance has been to campus several times since, to interact with faculty colleagues, for induction into the Edward P. Fitts Department of Industrial and Systems Engineering’s (ISE) first Alumni Hall of Fame class in 2006 and to serve on the advisory committee for the Computer Simulation Archives housed in the NC State Libraries. He and his wife, Barbara Page Nance, were back again for the College’s 2019 homecoming event, held in early November.

The College’s homecoming activities held on Nov. 7-8, 2019, included a barbecue lunch, tours of the new Fitts-Woolard Hall and a young alumni social.

After earning a Ph.D. at Purdue, Nance held faculty positions at Southern Methodist University and then Virginia Tech, where he served as the computer science department head (1973-79). The Raleigh native grew up watching NC State men’s basketball under legendary head coach Everett Case.

Homecoming gave the Nances a chance to check out the growing Centennial Campus, including its newest showpiece, Fitts-Woolard Hall.

The new home of ISE; the Department of Civil, Construction and Environmental Engineering; and the dean’s administration is scheduled to open in summer 2020.

Visiting alumni were invited to take tours of the building and see where innovative labs and teaching spaces will offer students an interdisciplinary engineering education that is second to none. 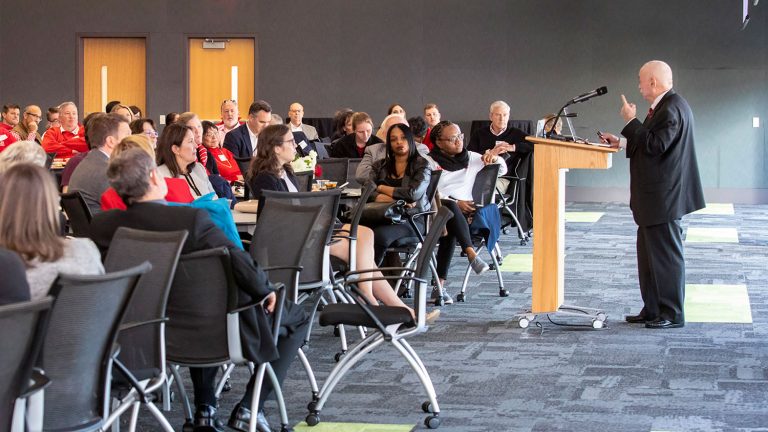 The College has pledged to raise $60 million in private funding to support construction of Fitts-Woolard Hall, and alumni learned about naming opportunities available within the building or the existing engineering buildings on Centennial that offer an opportunity to leave a permanent legacy at NC State. The College still needs $11.8 million in commitments to avoid taking on debt service to complete the building.

Dr. Louis Martin-Vega, dean of the College, told alumni during a lunch presentation that completing the new building is essential to continuing the College’s growth as one of the nation’s top public colleges of engineering. Over the last decade, the College has made tremendous strides in national rankings, increasing research infrastructure and the number of women faculty members.

This is more than bricks and mortar…

With the opening of Fitts-Woolard Hall, eight of the College’s nine academic departments will have relocated to Centennial. Making the move is essential to the College’s continued development.

Griffin Lamb, assistant dean for development and college relations and executive director of the NC State Engineering Foundation, said that, along with making a contribution toward Fitts-Woolard Hall, there are many ways for alumni to become involved with the College and lend support.

They can endow a scholarship or make a donation during NC State’s next Day of Giving. Acting as a mentor to a current student, serving on an advisory board or attending an event are also great opportunities.

“Please don’t wait until the homecoming to return again,” Lamb said. “This is your campus.”