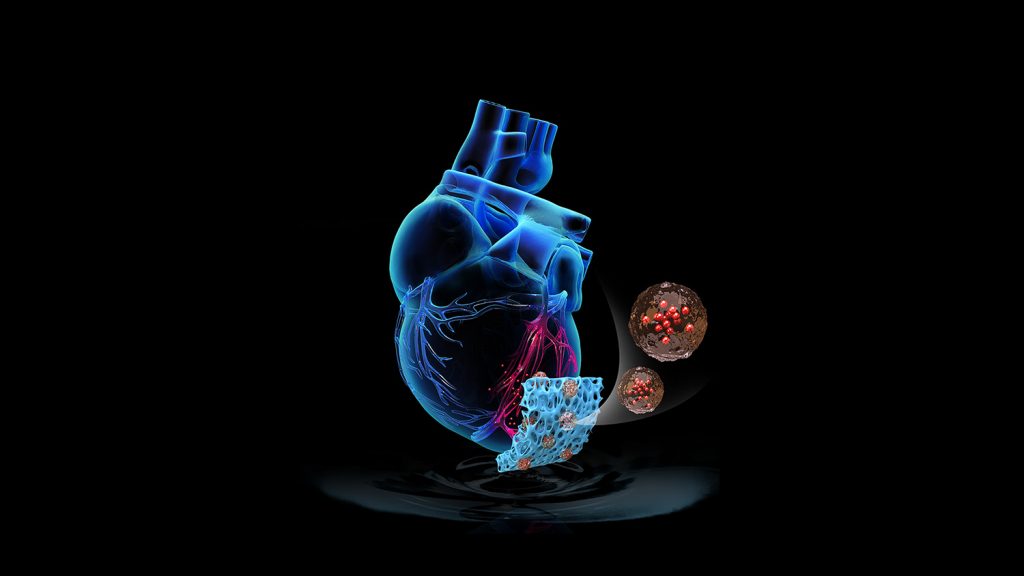 Cardiac patches are being studied as a promising future option for delivering cell therapy directly to the site of heart attack injury. However, current cardiac patches are fragile, costly, time-consuming to prepare and, since they use live cellular material, increase risks of tumor formation and arrhythmia.

“We
have developed an artificial cardiac patch that can potentially solve the
problems associated with using live cells, yet still deliver effective cell therapy
to the site of injury,” says Ke Cheng, Randall B. Terry, Jr. Distinguished
Professor in Regenerative Medicine at NC State’s College of Veterinary Medicine
and professor in the NC State/UNC Joint Department of Biomedical Engineering.

Cheng
and colleagues from NC State and UNC-Chapel Hill built the patch by first
creating a scaffolding matrix from decellularized pig cardiac tissue. Synthetic
cardiac stromal cells – made of a biodegradable polymer containing cardiac
stromal cell-derived repair factors – were embedded in the matrix. The
resulting patch contained all of the therapeutics secreted by the cells,
without live cells that could trigger a patient’s immune response.

In
a rat model of heart attack, treatment with the artificial cardiac patch
resulted in ~50% improvement of cardiac function over a three-week period
compared to non-treatment, as well as a ~30% reduction in scarring at the
injury site.

The researchers also conducted a seven-day pilot study of heart attack in a pig model, and saw ~30% reduction in scarring in some regions of the pig hearts, as well as stabilized heart function, compared to non-treatment.

Additional experiments demonstrated that artificial patches that had been frozen were equally potent to freshly created patches.

“The patch can be frozen and safely stored for at least 30 days, and since there are no live cells involved, it will not trigger a patient’s immune system to reject it,” Cheng says. “It is a first step toward a truly off-the-shelf solution to cardiac patch therapy.”

The research appears in Science Translational Medicine, and was funded by the National Institutes of Health and the American Heart Association. Cheng is corresponding author. Ke Huang, formerly a graduate student at NC State and currently a postdoctoral scientist at Duke University, is first author.

Note to editors: An abstract
follows.

Abstract:
Cell therapy has been a promising strategy for cardiac repair after injury or
infarction; however, low retention and engraftment of transplanted cells limit
potential therapeutic efficacy. Seeding scaffold material with cells to create
cardiac patches that are transplanted onto the surface of the heart can
overcome these limitations. However, because patches need to be freshly
prepared to maintain cell viability, long-term storage is not feasible and
limits clinical applicability. Here, we developed an off-the-shelf therapeutic
cardiac patch composed of a decellularized porcine myocardial extracellular
matrix scaffold and synthetic cardiac stromal cells (synCSCs) generated by
encapsulating secreted factors from isolated human cardiac stromal cells. This
fully acellular artificial cardiac patch (artCP) maintained its potency after
long-term cryopreservation. In a rat model of acute myocardial infarction,
transplantation of the artCP supported cardiac recovery by reducing scarring,
promoting angiomyogenesis, and boosting cardiac function. The safety and
efficacy of the artCP were further confirmed in a porcine model of myocardial
infarction. The artCP is a clinically feasible, easy-to-store, and cell-free
alternative to myocardial repair using cell-based cardiac patches.