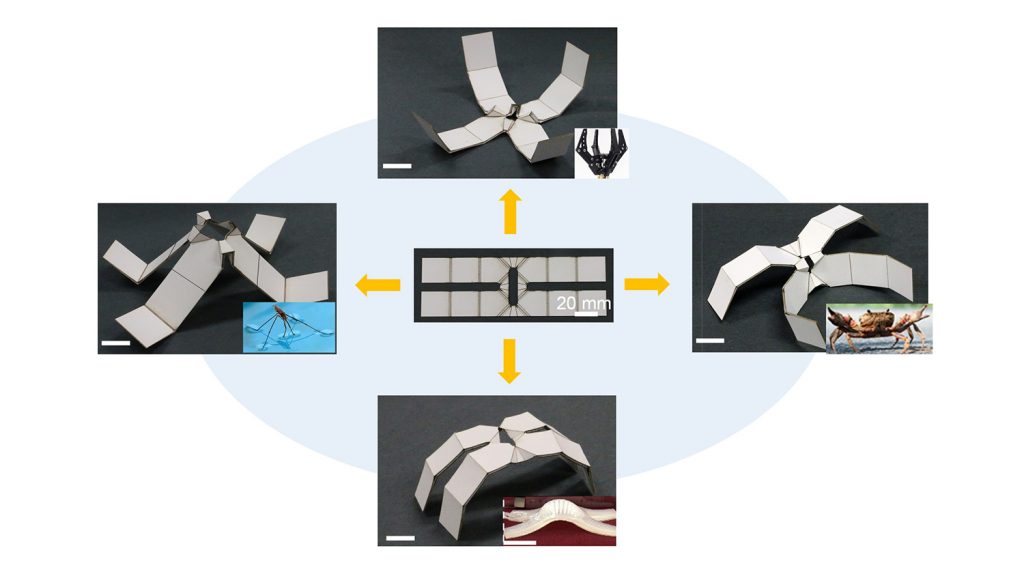 Researchers have demonstrated how kirigami-inspired techniques allow them to design thin sheets of material that automatically reconfigure into new two-dimensional (2D) shapes and three-dimensional (3D) structures in response to environmental stimuli. The researchers created a variety of robotic devices as a proof of concept for the approach.

“This is the first case that we know of in which 2D kirigami patterns autonomously reshape themselves into distinct 3D structures without mechanical input,” says Jie Yin, an assistant professor of mechanical and aerospace engineering at North Carolina State University and corresponding author of a paper on the work. “Instead, we apply energy in the form of heat, and the material rearranges itself.”

Kirigami is an art form in which a single piece of paper is cut and folded to create new shapes and structures.

The new “active kirigami” concept relies on a three-layered material, consisting of two outer layers that are not responsive to heat, and a polymer layer in the middle that contracts in response to heat. The shape and structure of the material are controlled in two ways. Through-cuts, which penetrate all three layers, control the material’s range of motion. Etchings, which penetrate the outer layers and expose the heat-responsive polymer, control the angle and direction at which the material folds, as well as how far it folds. As the material folds, it opens the through-cuts, shifting the shape of the sheets into 2D or 3D designs.

Video illustrating how active kirigami works can be seen at https://www.youtube.com/watch?v=KozSomLoKIg.

“We can make a 2D template with the same pattern of through-cuts and use it to create many different 3D structures by making slight changes in the etching,” Yin says. “This effectively makes the active kirigami sheets programmable.”

As part of their proof of concept, researchers used their kirigami approach to create a suite of thermoresponsive kirigami machines, including simple gripping devices and self-folding boxes. The researchers also created a soft robot with a kirigami body and pneumatic legs. By switching the orientation of the body, the researchers could rapidly reposition the legs, changing the robot’s direction of movement. Video of the proof-of-concept machines can be seen at https://www.youtube.com/watch?v=4U2ARa83188&feature=youtu.be.

“We used a temperature-responsive polymer for this work, but there’s no reason to think that other stimuli-responsive polymer materials – like photoactive liquid crystals – wouldn’t work as well,” Yin says. “We’re excited to explore the potential range of applications for these programmable, active kirigami materials.”

The paper, “Programmable active kirigami metasheets with more freedom of actuation,” is published in the Proceedings of the National Academy of Sciences. Co-first authors of the paper are Yichao Tang, a recent Ph.D. graduate of Temple University, and Yanbin Li, a Ph.D. student at NC State. The paper was co-authored by Yaoye Hong of NC State and Shu Yang of the University of Pennsylvania. The work was done with support from the National Science Foundation, under grants 1846651 and 1727792.

Published: Dec. 16, 2019, Proceedings of the National Academy of Sciences

Abstract: Kirigami (cutting and/or folding) offers a promising strategy to reconfigure metamaterials. Conventionally, kirigami metamaterials are often composed of passive cut unit cells to be reconfigured under mechanical forces. The new constituent stimuli-responsive materials in active kirigami metamaterials instead will enable potential new mechanical properties and functionality, arising from the active control of cut unit cells. However, the planar features of hinges in conventional kirigami structures significantly constrain the degrees of freedom (DOF) in both deformation and actuation of the cut units. To release both constraints, here, we demonstrate a universal design of implementing folds to reconstruct sole cuts-based metamaterials. We show that the supplemented folds not only enrich the structural reconfiguration beyond sole cuts, but also enable more DOF in actuating the kirigami metasheets into three dimensions (3D) in response to environmental temperature. Utilizing the multi-DOF in deformation of unit cells, we demonstrate that planar metasheets with the same cut design can self-fold into programmable 3D kirigami meta-structures with distinct mechanical properties. Lastly, we demonstrate potential applications of programmable kirigami machines and easy-turning soft robots.