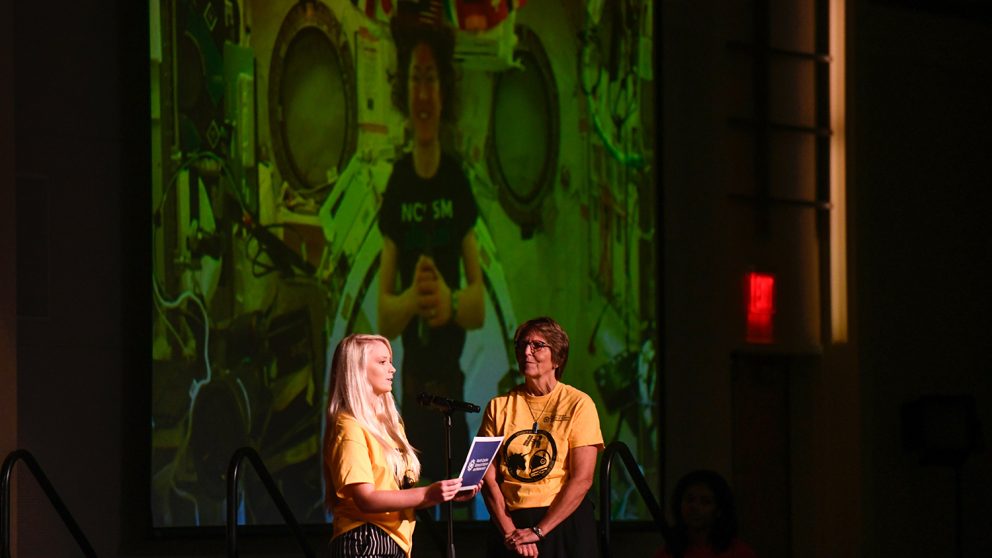 Asked by a student on earth about the hardest things for her to do on the International Space Station (ISS), NC State engineering alumna and NASA astronaut Christina Koch decided to demonstrate.

Koch, who was participating in a live downlink from orbit, showed an audience assembled in the Talley Student Union on campus and watching live online how easy it is to lose items that you need when you try to set something down for a second and soon realize that it has floated away. She talked about how astronauts drink liquids and where they sleep. Then there was something else.

“And then finally, the one thing that I find challenging is moving around in microgravity,” Koch said. “So let me show you an example of that.”

And with that, Koch floated up and out of the view of the video feed as students from NC State, the North Carolina School of Science and Math (NCSSM) and other schools around NC State’s Raleigh campus cheered.

Koch blasted off for the International Space Station on March 14, 2019. It was the culmination of a journey that began with dreams of space growing up in Jacksonville, NC, and studying at NCSSM; bachelor’s and master’s degrees in electrical engineering and a bachelor’s degree in physics from NC State; and nearly six years of astronaut training.

During the 19-minute downlink, she answered questions including how hard it will be to return to the moon, lesser known skills or abilities that are common among astronauts, which women inspired her to pursue her dreams in STEM and her favorite pastimes on board the ISS.

The event, held on August 30, 2019, and co-hosted by NCSSM, included a panel discussion with engineering and sciences faculty members, a keynote address and student exhibits.

When asked by a student about the biggest challenge to the future of space exploration, Koch mentioned NASA’s Artemis program, which is building toward a return trip to the moon and laying the groundwork for a mission to Mars.

“I’m so excited about the Mars mission because I think not only is it a great example of human exploration and pushing the frontiers, but it also gives us a chance to answer a question that I think is hugely important philosophically and for the question of our age really,” she said. “And that is, ‘are we alone?’ And I think going to Mars with people can answer that question.”

Asked about being a role model for young women interested in STEM, Koch pointed to the inspiration that she received from women in her family and leaders of the civil rights movement.

“I look around at basically any woman who was strong that believed in themselves and that wasn’t afraid to take on their own dreams full speed ahead. Those are the types of people that really inspired me,” Koch said.