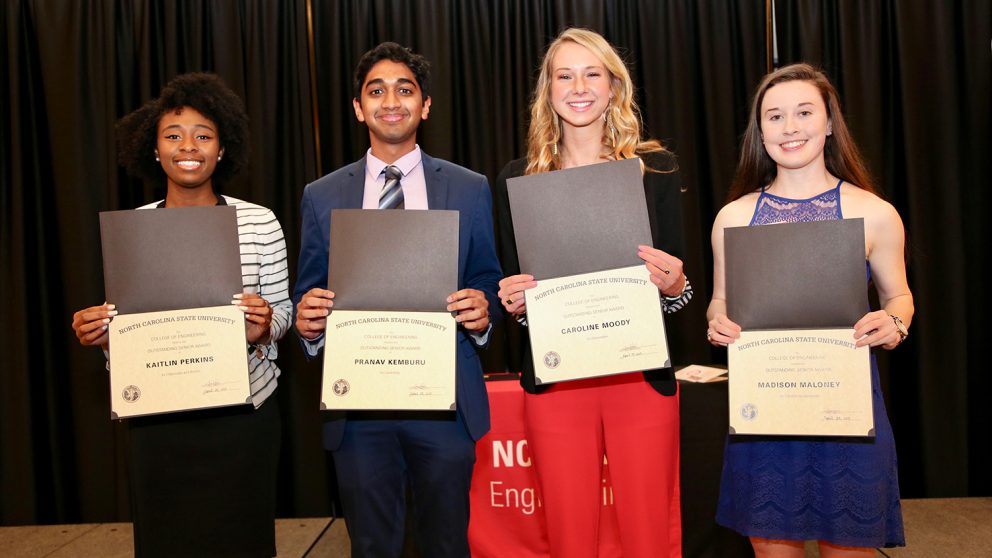 The College of Engineering at North Carolina State University presented the 2019 Outstanding Senior Awards to four exceptional students in the categories of Humanities, Citizenship and Service, Leadership and Scholarly Achievement.

The College’s academic departments nominated seniors in all four categories. The winners and nominees were recognized on April 29 in Talley Student Union at the annual awards reception.

Caroline Moody, a senior double-majoring in international studies and chemical engineering in the Department of Chemical and Biomolecular Engineering, received the Senior Award for Humanities. Moody’s passion for engineering and the humanities helps her to understand both the human and technical aspects of the Grand Challenges for Engineering that society is facing. She has also studied abroad in Sweden and Ecuador, which has given her a global perspective on how humanities and engineering intersect.

A Larry K. Petty/Ben Franklin Scholar, Moody is a member of the University Scholars Program and a recipient of the Henry B. and Virginia T. Smith Scholarship. She also received the Robert Hoffman Award, which is presented to an outstanding freshman in the Ben Franklin Scholars program.

She participated in student senate and played a significant role in the University reopening the Hillsborough Street entrance to D.H. Hill Library. She also held leadership positions in Pack Abroad Ambassadors. Moody has assisted with several research projects, including one at Clemson University in a chemical engineering lab and one at NC State in the Engineered Medical Responses Lab. She has held two internships with Deloitte in Atlanta and Asia.

Kaitlin Perkins, a senior in the Department of Biological and Agricultural Engineering, is the recipient of the Senior Award for Citizenship and Service. An excellent student and dedicated volunteer and mentor, Perkins made it her duty to give back to others in the same way in which many people in her life helped her to get to where she is today.

Perkins jumped right into supporting students interested in STEM. She held leadership positions in the NC State chapter of the National Society of Black Engineers and developed the Black Excellence Initiative to enhance K-12 STEM outreach activities. She also served as a teaching assistant for the Math/Science Education Network to help high school students with engineering-related activities and was a counselor for the NC State Minority Engineering Summer Transition Program.

During her time at NC State, Perkins minored in Spanish so that she should could more effectively support Hispanic students interested in engineering, and she spent a week in Guatemala on a health service trip. She is a Caldwell Fellow, a member of the W.E.B. Dubois Honor Society and an NC State Pack Promise Scholar, and she was chosen to introduce former First Lady Michelle Obama during a Democratic rally in Raleigh in 2016. Perkins interned for Campbell’s Soup Co. and for Johnson & Johnson Vision Care during her undergraduate career. She also worked in a research lab within the Department of Materials Science and Engineering.

Pranav Kemburu, a senior in the Department of Electrical and Computer Engineering, received the Senior Award for Leadership. Kemburu has been a leader at NC State since he stepped on campus, and with his drive, academic aptitude and entrepreneurial abilities, he has helped to make the University a better place.

A Ben Franklin Scholar and Park Scholar, Kemburu is a talented student who shows leadership both on and off campus. He served as the NC State University representative for the Attorney General’s Collegiate Opioid Council, as a chancellor’s aide and as president of the Student Amateur Radio Society. He also organized the Park Social Justice Speaker Series, and he has served on the diversity academic committee in a leadership role. During his time at NC State, Kemburu was an active mentor to first-year students. Off campus, he has interned with NASA and Deloitte.

Kemburu sees leadership as something beyond titles and authority positions — to him, it is a guiding vision that inspires people to work together toward a common goal. He is also studying economics, and along his broad range of interests and expertise, he has the drive to make a significant impact on the world. His compassion, desire to understand different cultures and thoughtful demeanor have allowed him to help and guide many people across the campus community, the state of North Carolina and across the world during his travels abroad.

Madison Maloney, a senior in the Department of Mechanical and Aerospace Engineering, received the Senior Award for Scholarly Achievement. Maloney holds a 4.0 GPA and aims to advance space exploration, with the goal of becoming an astronaut.

Maloney has undertaken several significant research projects while at NC State, as well as during internships with NASA. She has twice interned with NASA, and during her first internship there, she co-authored a paper currently under review based on her research at the Langley Research Center. Maloney also excelled in Russian language and literature courses to prepare herself for future interactions with Russian astronauts and scientists.

Outside of the classroom, Maloney has served as an Engineering Ambassador and was the student government director of athletics. She also participated in the NC State Leadership Development program, and she volunteered with the Special Olympics and Miracle League.

Other nominees for the awards were:

Why young STEM researchers are calling for paid family leave

A group of young researchers is stepping outside their disciplines to address the gender gap in STEM jobs.

“Busy” is often the word of the day for Belhaven native and Goodnight Scholar Kody Jefferson ’21. However, those busy days are spent enriching himself in what he loves: mechanical engineering, robotics, and the Goodnight Scholars Program.