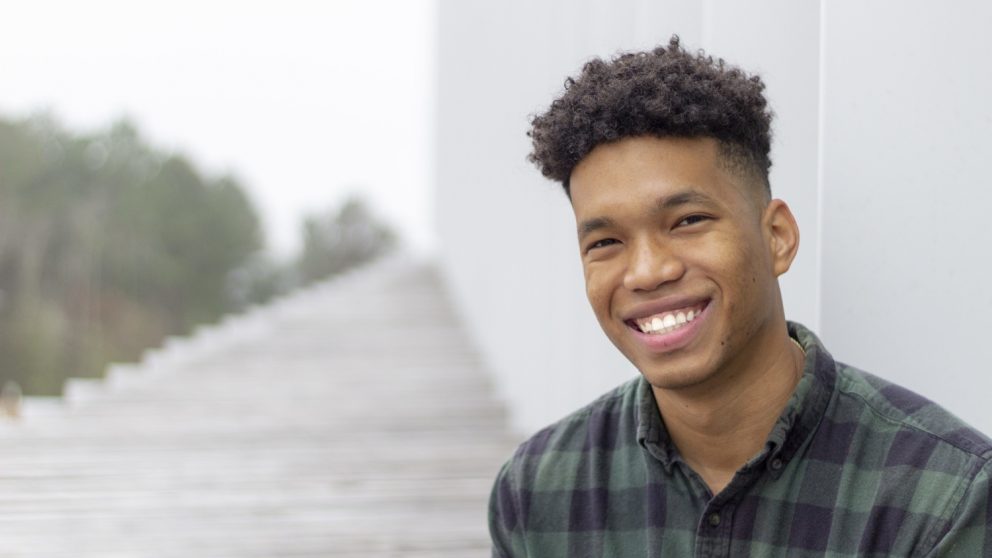 The email came while Asa Augustin, then in high school, was on campus for the Experience NC State admissions event: A decision has been made on your Goodnight Scholars Program application.

The message was so short, he figured he didn’t get in. But he checked his status anyway, and there, waiting for friends in the Dan Allen parking deck, Augustin found out he would be a member of the Goodnight Scholars Class of 2019.

His acceptance was the culmination of years of planning. NC State had been Augustin’s first choice since midway through high school in Jacksonville, North Carolina, and he started thinking about engineering as a major as a ninth-grader, when he participated in STEM activities through Project Lead the Way. As early as middle school, he raised his hand when a teacher asked who wanted to go to college. But he also was already concerned about the cost.

“I always knew I wanted to get a higher education, but finding ways to make that attainable seemed daunting,” he said. “What’s great about the Goodnight Scholars Program is that it’s not just about making college affordable. Once you’re here, they want to make sure you succeed and that you have support and access to the resources you need to really grow and become the best version of yourself.”

Augustin has undertaken a variety of experiences that have shaped him over the past four years, including an Alternative Service Break trip volunteering in Trinidad and Tobago. He was part of a group that spent a week volunteering at the Asa Wright Nature Centre and helping teach young students about environmentalism. “It was a really great way to do some service and also interact with a community I might not otherwise get the chance to,” he said.

The trip was significant for another reason as well: Augustin’s father is from St. Lucia, an island approximately 200 miles north of Trinidad and Tobago.

“I’ve never been before,” he said. “Being able to see an environment similar to where he grew up and getting more perspective on his path here and his struggle was really rewarding.”

Through the Goodnight Scholars Program, Augustin also studied abroad in Florence, Italy. He traveled alone at times, and he credits thriving in an environment with a significant language barrier to helping him succeed in college.

“That was a really good opportunity for me. It helped me expand what I’m comfortable doing and realize what I’m capable of,” he said.

Another fundamental part of Augustin’s success is his commitment to helping others achieve as well. For the past three years, he has served as a peer mentor in the Goodnight Scholars Program. As new cohorts of Goodnight Scholars arrived on campus, Augustin would be paired with two incoming students.

“Every time I met my mentees for the first time, it would bring me back — those excited but nervous feelings,” he said. “I’d make it clear I was there as a resource and friend.” Watching those he mentored adapt to college and seeing their relationships evolve over time has been a gratifying experience.

He has also participated in multiple service projects through the Goodnight Scholars Program, including volunteering at the Duke Lemur Center, visiting local elementary schools and helping clean up parks.

“There are so many events that the program organizes based around service and community, and those have been awesome,” Augustin said. “It’s been great to give back — whenever I have the time to do something, I can.”

He particularly enjoyed serving on the committee for LEGO Brick Build, an event that takes place in Carmichael Gymnasium and introduces elementary and middle schoolers to STEM principles using LEGOs.

Leveraging STEM into practical applications is something that appeals to Augustin in his own education. He is currently working on applying his mechanical engineering skills to entrepreneurial opportunities. As part of his senior design project, he joined a team out of the Entrepreneurship Garage to develop a product called Dinsta, an alternative to traditional toothbrushing. The team won the Audience Choice award at Entrepalooza.

He described Dinsta as a mouthguard with lots of tiny holes spraying pressurized water.

“The average person only brushes their teeth for one minute for the whole day,” Augustin explained, well below the recommended amount of two minutes twice a day. “If the average person won’t take the time they need to clean their teeth, how can we rethink the process?”

It’s these critical thinking skills that led Augustin to his new job: working as a business technology analyst for Deloitte in Charlotte. “Deloitte and similar companies are now targeting engineering students because they can think critically and learn on the fly,” he said.

In his role, he will be assisting clients with implementing technology solutions.

With his next step settled and graduation just around the corner, Augustin is reflecting on the difference the Goodnight Scholars Program and its founders Jim and Ann Goodnight have made for him.

“I’m super thankful for everything the Goodnights have put into the program. There are so many things in my college experience I was able to only do because of them and donors like them.”

The BAE Research and Educational Enhancement Projects (REEP) are an opportunity for undergraduates to design and conduct research. Erin Cooper, a senior majoring in biological engineering with a concentration in bioprocessing, was selected as the 2019 REEP scholar. Her project focuses on combining two processing steps used in current ethanol production: hydrolysis and fermentation.

A legacy of aiming high

NC State industrial and systems engineering major and scholarship recipient Charles Blum, who won a national award as Air Force ROTC Student of the Year, has tried to channel determination and selflessness into activities across campus.