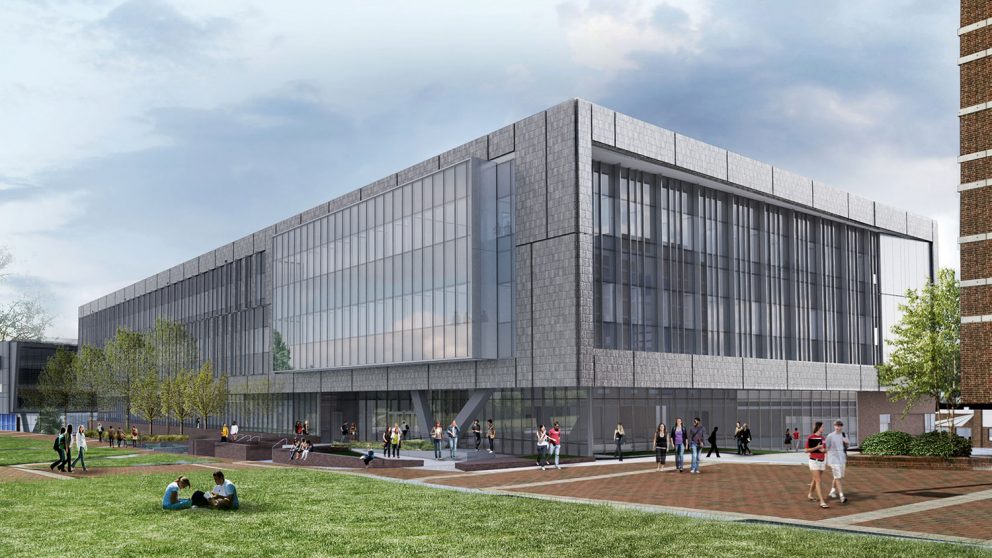 It’s been almost a year since the University broke ground on the new Fitts-Woolard Hall on Centennial Campus. This new building — which will house the Department of Civil, Construction, and Environmental Engineering (CCEE); the Department of Industrial and Systems Engineering; and the dean’s administrative offices — is integral to helping the College come together on one campus and in helping meet the demand for engineers and computer scientists. Meet three alumni and a friend of the College who have supported the project and are helping to facilitate innovation in research and education.

With a family legacy to follow, Smedes York knew attending NC State was the best choice for him, especially because he wanted to work in the construction business.

He went on to serve as a lieutenant in the United States Army Corps of Engineers — where he received an Army Commendation Medal in 1966 for his service in South Korea. After his time in service, he returned to academia and earned his MBA from UNC Chapel Hill in 1968, then joined his father’s company.

York was highly involved in civic groups and public service in Raleigh. He served on the city council and was elected mayor of Raleigh and served from 1979-83.

Currently, he serves as chairman of both McDonald York Building Company and York Properties.

Thinking back on his time as an NC State student, York finds his NC State degree and the time he spent in the College invaluable.

“My degree helped me with learning very tight scheduling. During my time playing basketball and being active with the fraternity, while being a full-time student, it taught me how to use my time wisely and to be disciplined,” he shared. “I learned confidence —  confidence with numbers and math and applying it all in business.”

My hope is that this new first-class building will help attract even more innovative faculty members that will educate the civil engineers of tomorrow.

Jack McDonald attended Merrimack College in North Andover, Mass., where he earned a bachelor’s degree in civil engineering in 1965. Shortly after graduation, he went on to serve as a lieutenant in the US Army Corps of Engineers, where he was awarded the Army Commendation Medal in 1968. He became a registered Professional Engineer in 1977.

McDonald and York came together in 1993 to form McDonald York by merging Coleman and Wood, a general contractor company, with York Construction Company. In 2003, they bought the company outright. McDonald currently holds the title of co-owner and executive chairman of McDonald York Building Company.

With an interest in engineering and the community, McDonald was a founding member of the CCEE Advisory Board.

“We have a number of NC State grads working for us and it seemed natural to help NC State develop curriculum for future engineers,” McDonald said.

The two business partners recently came together and made a gift to support Fitts-Woolard Hall.

McDonald said that during his time on the advisory board, he would meet the board in Mann Hall on main campus and note the impact that using an aging building was having on faculty members and students.

“To be a leader in civil engineering, this new building is needed,” he shared. “My hope is that this new first-class building will help attract even more innovative faculty members that will educate the civil engineers of tomorrow.”

“As a company and culture, we want to be part of moving forward —  so naturally we’re pleased to be part of the efforts to help create this new building,” York said. “It wasn’t a difficult decision —  anything we can do for NC State is a labor of love.”

For Anna, who earned her bachelor’s degree in civil engineering in 1983, her abilities in math led her to pick engineering. Watching David Thompson and the NC State men’s basketball team as a young girl was also a factor.

The Sullivans are the co-founders, former co-owners and presidents of Thomas-Bain Leather, Inc., a manufacturer of upholstered and leather furniture in Conover, NC.

Brad credits his degree from NC State in helping him learn the discipline he would need when he and Anna started their manufacturing business. But, he also credits NC State for so much more.

“One of my favorite memories at State was when classes would change and the plaza between Riddick Hall and Mann Hall would be crowded with students. In that crowd I noticed a very pretty girl, who later became my wife of 35 years and counting,” he said.

For the Sullivans, giving to the Fitts-Woolard Hall effort felt right. “I’m a civil grad, and my husband was industrial, and that the two were combined in the building, it was a no-brainer,” shared Anna.

The duo had attended an event in Newton, NC, where Dean Louis Martin-Vega was speaking about the College and the current needs. “Hearing what the dean had to say, how can you say no to him?” laughed Anna. “Dean Louis’ excitement is contagious.”

Brad and Anna have each named something in their respective departments in the new building. He named the Brad Sullivan Study Lounge in ISE, and Anna named the Anna Callanan Sullivan Lab, which will be home to the Structural Behavior Measurements Lab in CCEE.

“We didn’t want to do Mr. and Mrs. —  we felt it was important to have something in each of our home departments,” shared Anna.

The impact to be felt by the new building, according to the Sullivans, will show that the College is growing and that with support it will bring the best and brightest to the University and to the state.