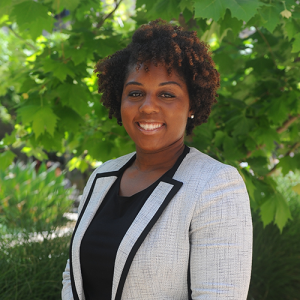 Four years out of her Ph.D. program at NC State, Dr. Makita Phillips is forging her own, unique path toward making impactful, accessible change.

Phillips works for a startup that is setting the new standard for thermal materials in electronics packaging while continuing on the route to becoming a tenure-track professor. She’s also taking her mechanical engineering knowledge outside of her career by actively mentoring minority engineers — and more recently, to win $15,661 toward her student loans on the game show Paid Off with Michael Torpey.

Phillips, who is from Clinton, Md., is currently an American Society for Engineering Education/National Science Foundation Small Business Innovation Research Postdoctoral Fellow at Carbice Corporation, an Atlanta-based startup that has introduced Carbice® Carbon, an innovative aligned nanostructure multi-functional composite that is used today in the world’s most important electronic products.

At Carbice, she is working on a product called icebox™, a Carbice® Carbon and phase-change material composite that stores thermal energy and cools devices more efficiently than current technologies. She recently presented on the work at the 2018 ITherm Conference.

Phillips, whose Ph.D. in the Department of Mechanical and Aerospace Engineering focused on thermal management, has also researched how to improve the efficiency of solar cells, how heat can be converted to energy using magnetic materials and how to store thermal energy for later use. “I also want to understand how the things we design affect society and how society can participate in the process so we make sure we’re creating inclusionary devices and not just innovating for the sake of innovation,” she said.

In her time at NC State, Phillips learned how to focus her career and the different pathways available to her through her interactions with professors and with advisors and fellow students in the Minority Engineering Programs.

“I knew I wanted to go the tenure-track route, but I also had different opportunities to not only be a post-doc conducting research, but also look at ‘How do you build a company? How do you take the things we engineer and make them commercially available?’” Phillips said. “At NC State, I learned a lot about being observant to your surroundings and then making your pathway fit for you and going after those different things you’re interested in.”

“There was a sense of accomplishment but also a sense of ‘We need to do more,’” Phillips said. “We have to do a better job of recruiting and making sure the environments are inclusive for everyone who we do recruit, so that when students arrive, they feel welcome.”

While at NC State, Phillips founded the Minority Engineering Graduate Student Association (MEGSA) to provide a way for minority graduate students to get to know each other and talk about issues that affect their community, as well as provide peer mentoring for first-generation graduate and undergraduate students.

Phillips continues to provide mentorship for MEGSA, and she said she plans to visit sometime this academic year. She is also actively involved in the National Society of Black Engineers, an organization that supports and mentors African-American students and professional engineers.

Her episode on the game show aired last month. In Paid Off with Michael Torpey, which is filmed in Atlanta and airs on TruTV, contestants answer questions to win money that will help pay off their student loans. Phillips made it to the final round and had one minute to answer as many questions about mechanical engineering as she could. She answered five correctly, winning money to pay for 30 percent of her loans, in addition to what she had already won on the show.