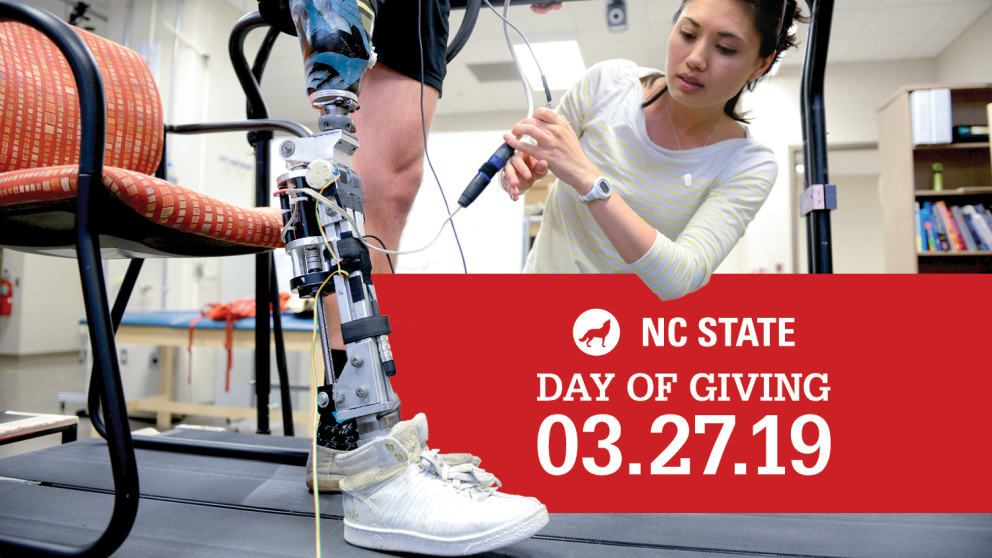 On March 27, NC State University hosted its inaugural Day of Giving — a 24-hour fundraising campaign to maximize support for the University — and the College of Engineering’s alumni, students and friends rose to the challenge and did the extraordinary.

The College raised $1,972,851 from 1,564 gifts, and it received more gifts than any other college or program and raised the second-most dollars overall.

These gifts support innovative research, scholarships, study abroad and other educational programs for student engineers and the College’s state-of-the-art facilities.

“I want to thank each and every one of you who helped us with our first annual Day of Giving,” Dean Louis Martin-Vega said. “This was a wonderful day for all of us.”

Within the College, the nine academic departments competed to win a share of $15,000 from Martin-Vega based on the number of gifts received. The Department of Mechanical and Aerospace Engineering (MAE) took home the top prize with 428 gifts, followed by the Edward P. Fitts Department of Industrial and Systems Engineering (ISE) with 289 gifts and the Department of Civil, Construction, and Environmental Engineering (CCEE) with 172 gifts.

Additionally, the NC State Engineering Foundation Board of Directors awarded $11,000 in prize money after Day of Giving based on a percentage of participation by department alumni.

Throughout the day, the College competed in the Red Division Leaderboard against five other colleges and programs. NC State’s engineering community kept the momentum going by using the #GivingPack hashtag on social media and helping the College win several giving challenges, including both of the Most Gifts Challenges, a competition to see which college received the most gifts at a designated hour. The College also won the First Gift Challenge when an ISE student was the first to make her gift at 12 a.m., as well as the Out-of-State Challenge, receiving the most gifts from outside North Carolina.

The College’s faculty and staff took part in the spirit of the day, celebrating and encouraging gifts of all sizes. MAE, ISE and CCEE all hosted well-attended Day of Giving events that evening to continue the fun.

The highest single gift of the day was a $1 million gift, and the farthest gift came from Singapore. Of the 1,564 gifts, almost two-thirds — 994 gifts — were from College alumni.

In a video posted after the event, Chancellor Randy Woodson thanked those who made gifts, saying he was proud of what donors helped NC State accomplish. The University in total raised more than $13.5 million from more than 10,000 gifts on Day of Giving.