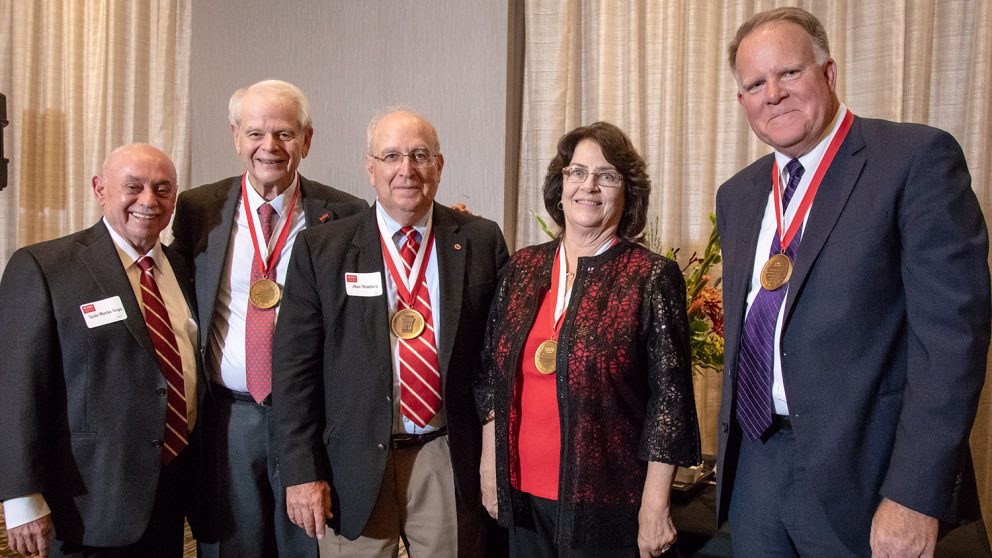 The College of Engineering bestowed the Distinguished Engineering Alumnus award on Suzanne Gordon, Peter Lehrer, Gil West and Alan Weinberg at a banquet on Oct. 31.

Gordon earned her bachelor’s degree in computer science and mathematics in 1975 and master’s degree in statistics from NC State in 1980. During her more than 30 years at SAS Institute, she held a variety of key leadership roles, rising to vice president of information technology, and eventually chief information officer, at the world’s largest privately held software company.

She is the current president of the NC State Engineering Foundation Board of Directors and is the first woman to hold that position. She was a member of the NC State Board of Trustees from 1999 to 2009 and has served on the Alumni Association Board of Directors and on the College of Management Advisory Board. She is a Distinguished Alumna of the College of Physical and Mathematical Sciences.

Lehrer earned his bachelor’s degree in civil engineering from NC State in 1963.

In 1979, Lehrer co-founded Lehrer McGovern, Inc., a construction management firm that consistently ranked as one of the top construction companies in the country. After the firm merged into Bovis, Ltd. (London), in 1988, he became vice chairman of Bovis, Ltd., and chief executive officer of all U.S.-based subsidiaries. Previous projects include the 1996 Atlanta Olympic Games, Euro Disneyland, Canary Wharf, and restoration of the Statue of Liberty and Ellis Island.

He is a previous member of the Society of Plastics Engineers, the Department of Chemical Engineering’s Advisory Board at Clemson University, and the Department of Chemical and Biomolecular Engineering’s Alumni Advisory Board at NC State. He has served on various community boards including the Warehouse Theater, the International Chamber Music Series and the Osher Lifelong Learning Institute (OLLI) at Furman University.

West earned his bachelor’s degree in mechanical engineering from NC State in 1984. Additionally, he received a Master of Business Administration degree from National University in San Diego. As senior executive vice president and chief operating officer for Delta Air Lines, he leads the team responsible for safe, reliable operations across the globe, including more than 70,000 employees in areas that include Airport Customer Service, Cargo, Corporate Safety, Fleet Strategy & Technical Procurement and Flight Operations.

He serves as a key alumni volunteer in the Atlanta area and is an annual contributor both to the Dean’s Circle and Fitts-Woolard Hall. West is also assisting the University in forming a “C-Suite Advisory Group” consisting of the College’s top alumni.