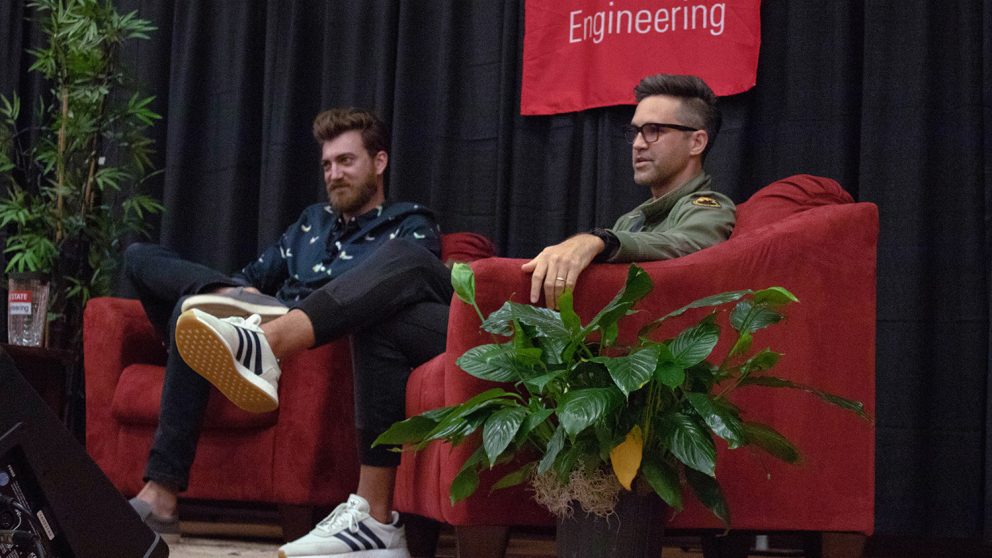 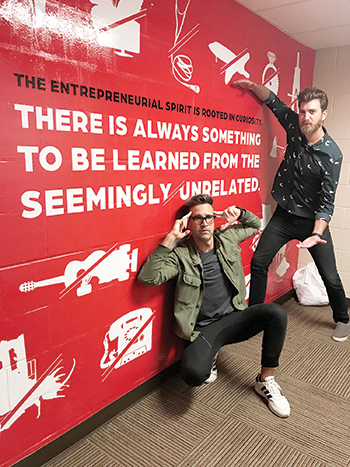 When Rhett McLaughlin and Link Neal — better known as comedy duo Rhett & Link — were teenagers, they made a blood oath that they were going to create things together. But what they didn’t know at the time is that they’d first be attending the College of Engineering at NC State together, earning degrees that helped them in unexpected ways in their entertainment careers.

Rhett and Link ended up at NC State, they said, because they were doing well in math and science during their senior year of high school, so people suggested that they study engineering — and Rhett’s dad said he wouldn’t pay for film school and thought his son should pursue a more practical degree.

The duo returned to NC State on Oct. 13 to speak to a full auditorium in the James B. Hunt, Jr. Library on Centennial Campus, talking about their non-traditional path into entertainment and their advice for students.

“Engineering is something worth investing in,” Link said in an interview before the event, thinking back to what Rhett’s dad said. “Turns out, in a weird way, he was right,” Rhett responded.

Rhett graduated with a degree in civil engineering in 2000, and Link finished a semester later in 2001 with a degree in industrial engineering. Both worked in their respective fields for a few years before deciding to pursue entertainment full time. They started their YouTube channel in 2006, after realizing that people were downloading videos from their website, posting the videos on YouTube and getting more views than they did on their website.

Now, their channels have a combined 23 million subscribers, and their videos have more than 6 billion views. They film a daily talk show called Good Mythical Morning, created the entertainment company Mythical, host the podcast Ear Biscuits and published Rhett and Link’s Book of Mythicality: A Field Guide to Curiosity, Creativity, and Tomfoolery.

“We approach what we do, even if it’s creative, we approach the comedy and the creative things as problems — problems with solutions. It’s different kinds of solutions, but it’s a similar process,” Rhett said when asked how their engineering degrees influence their work. “So I don’t think we’ve changed very much in the way that we approach things. Still doing it in a very technical way, even though it’s something very creative.”

During their hour-long Q&A session with students, Rhett and Link answered questions submitted by students while Dr. Jerome Lavelle, associate dean for academic affairs in the College, moderated. The two were also inducted into the NC State chapter of the Order of the Engineer, an organization created “to foster a spirit of pride and responsibility in the engineering profession.” Members of the order are given rings to wear on the pinky finger of their working hand.