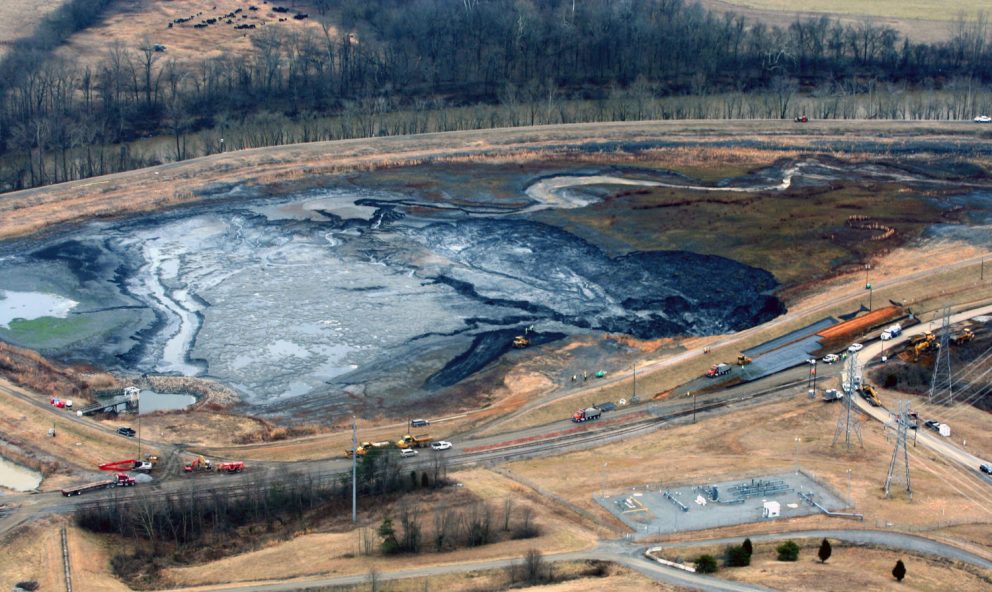 Photo from the coal ash spill on the Dan River in 2014. Credit: Waterkeeper Alliance. Shared under a Creative Commons license.

Spills of coal ash from containment ponds have caused environmental damage to several waterways across the Southeast.

Now, engineers from NC State have developed a technique that uses bacteria to produce “biocement” in the ponds, making the coal ash easier to store and limiting the risk of spills.

Coal ash is produced by coal-fired power plants and is often stored in ponds. If the walls of these ponds fail, they can spill coal ash into nearby surface waters — as happened in the wake of Hurricane Florence in 2018, in Virginia’s Dan River in 2014 and in Tennessee in 2008. These spills can have significant consequences, because coal ash contains contaminants such as mercury and arsenic.

“Our goal with this work was to see whether we could use bacteria to create a biocement matrix in coal ash ponds, making the coal ash stiffer and easier to contain,” said Dr. Brina Montoya, an assistant professor in the Department of Civil, Construction, and Environmental Engineering (CCEE), and co-author of two papers on the work.

Specifically, the researchers wanted to make use of bacterial species that feed on urea and, in the presence of calcium, produce a stiff substance that binds to surrounding solids. The resulting byproduct is called biocement.

“The idea is to introduce these bacteria — which are normally found in soil — into coal ash ponds, along with urea and calcium,” Montoya said. “The resulting biocement wouldn’t make the coal ash completely solid, but it would be a lot more viscous than the existing coal ash slurry.”

In laboratory experiments, the researchers found that the process works with coal ash — the bacteria create biocement using coal ash, and the coal ash slurry becomes stiffer. In other words, the coal ash mixture is much less runny.

“This will certainly make it easier to contain, and less likely to contribute to pond failures that discharge coal ash into surface waters,” Montoya said.

But the researchers are hoping that the bacterial biocement will also have a second benefit.

Because most coal ash ponds are simply unlined holes in the ground, contaminants in the coal ash can leach into groundwater, raising environmental and public health concerns. The researchers are hoping that the biocement can also trap potentially toxic metals in the coal ash, though that work is ongoing.

Both papers were co-authored by Dr. Shahin Safavizadeh, a former Ph.D. student in CCEE, and Dr. Mohammed A. Gabr, a Distinguished Professor in the department.