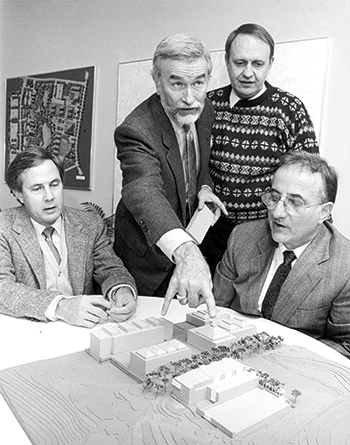 1991 was an important year for Centennial Campus.

North Carolina Gov. James B. Hunt Jr. established Centennial on Dec. 19, 1984, by allocating 355 acres from the Dorothea Dix Hospital property. The new campus was named in honor of NC State’s centennial in 1987.

By 1991, more land had been added to the campus and a master plan developed. That year, Research Building I, the first building on campus, was completed and the College of Textiles opened its new home there. ABB became Centennial’s first corporate tenant that same year.

Monteith served as dean of engineering from 1978 to 1989 and then as chancellor from 1989 until his retirement in 1998. McKinney left his position as dean of the School of Design in 1988 to serve as a special assistant to the chancellor leading development of Centennial.

Cavin was head of the Department of Electrical and Computer Engineering and served as dean of engineering from 1994 to 1996. Whitten is a former dean of the College of Physical and Mathematical Sciences and now a professor emeritus in the Department of Chemistry.

Today, the thousand-acre campus is home to 76 industry, government and nonprofit partners and 75 university centers, institutes and departments.

The College will continue its move to Centennial with the opening of Fitts-Woolard Hall, the newest engineering building on the campus, in summer 2020. Fitts-Woolard Hall will be the new home of the Department of Civil, Construction, and Environmental Engineering; the Edward P. Fitts Department of Industrial and Systems Engineering; and the dean’s administration. With its opening, eight of the College’s nine academic departments will call Centennial home.

Fitts-Woolard Hall represents a new paradigm for NC State, using a public-private partnership to fund the construction of an academic building.

Learn more about what’s happening on Centennial Campus in our Q&A and about how you can support construction of Fitts-Woolard Hall.