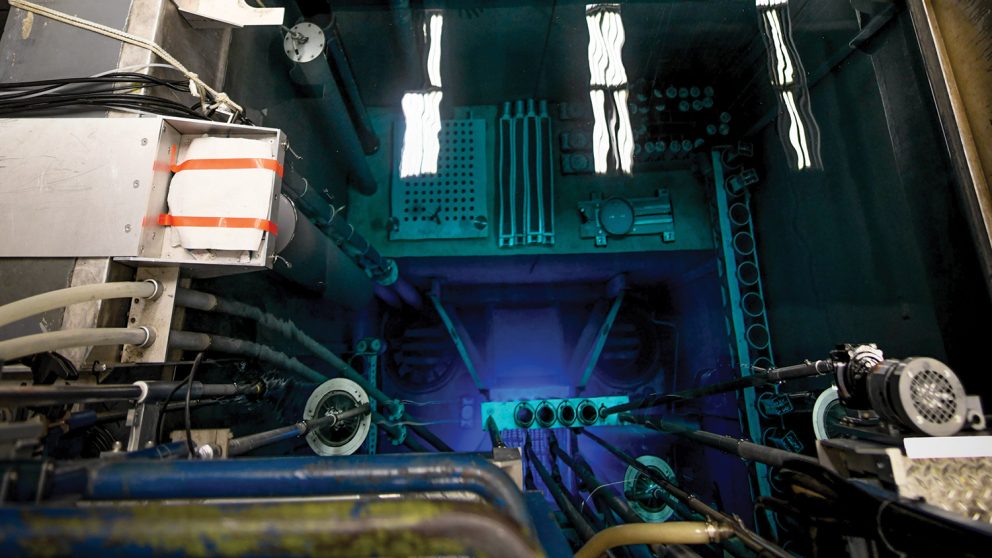 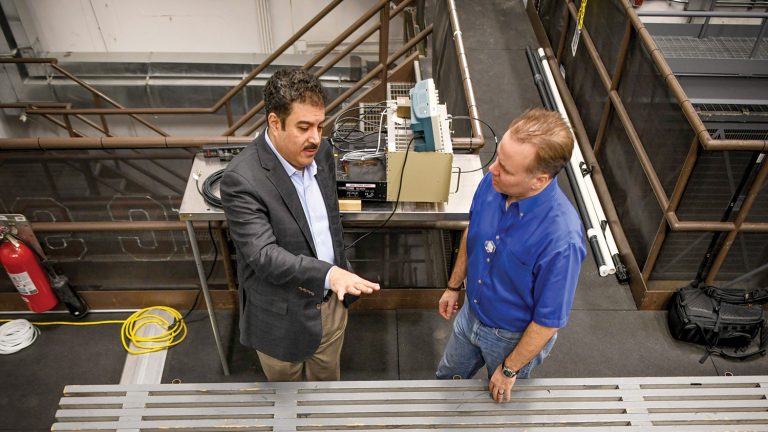 In the center of NC State’s campus, the university-operated 1-megawatt PULSTAR reactor facility — the only reactor of its type still in operation — powers one of the most exceptional nuclear facilities in the world, where researchers conduct experiments to explore questions about the constituents of matter and the creation of the universe.

Over the last 15 years, the Nuclear Reactor Program (NRP) has added state-of-the-art instruments to its reactor, including two facilities that are the only ones of their kind in the United States — an intense positron beam that makes it possible to observe the energy created when positrons (i.e., antimatter electrons) and electrons annihilate, and an ultra-cold neutron source that can generate rare species of neutrons and slow them down to answer questions about major physics models.

“It’s a very unique facility in that it is used standalone on its own, and that is the sort of spirit we have here,” said Dr. Ayman Hawari, distinguished professor of nuclear engineering and director of the NRP. “Researchers either can’t do some of the things that we do here elsewhere, or can do it just as well here.”

Since Hawari started at NC State in 2002, the PULSTAR reactor has shifted from a staging ground that ran only a few hours a week to a renowned facility that often runs for months at a time. Major universities are regularly using the reactor for research. NC State pioneered the internet reactor lab, which allows students at universities around the world to learn, using a remote cyber-secure connection to the PULSTAR, how to operate nuclear reactors.

Just as NC State is leading the way now — ahead of other leading engineering universities, and with even more advanced capabilities than those available at reactors affiliated with major research centers — it was also the first to have an on-campus nuclear reactor.

Who would think that someone would have this imagination to envision an educational nuclear reactor on a university campus? 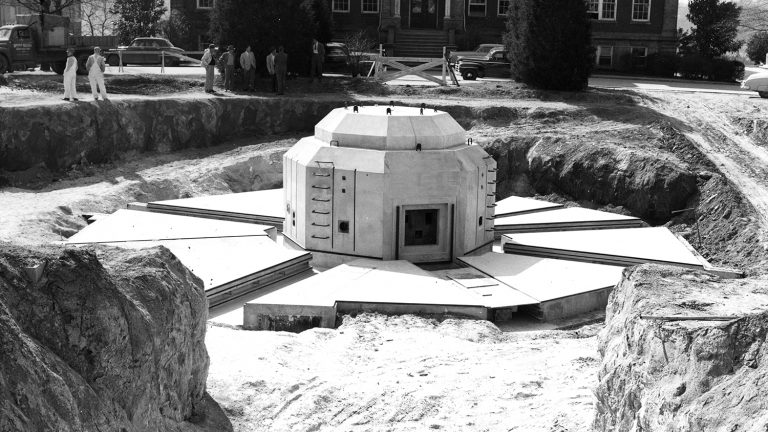 First of its kind

In 1949, Dr. Clifford K. Beck came to North Carolina State College, as it was called then, with an unprecedented idea — an on-campus nuclear reactor, open to students, professionals and the public.

At the time, nuclear engineering was a secretive field, especially in the wake of the atomic bombing during World War II. But university officials approved the reactor in 1950 and established the first nuclear engineering curriculum. In 1953, the Raleigh Research Reactor — designated and licensed as R-1 by the U.S. Atomic Energy Commission — opened as the first reactor to be used for peacetime training and research, and in 1954, NC State awarded the first two Ph.D.s in nuclear engineering.

UNC System President Gordon Gray (1950-55) called the nuclear reactor a “milestone in preparing to use atoms for education and free enterprise,” after it became operational in September 1953. “Its story is a major item in the development of atoms for peace.”

Since the completion of the first reactor, NC State has been home to four others. After R-1 was shut down in 1955 due to corrosion and leaks, nuclear engineers initialized criticality of R-2 in 1957. That core was removed in 1958 to the Bureau of Mines Building, where it became known as R-4 and was operational from 1959-61. R-3 operated from 1960-73, when it was shut down after the PULSTAR nuclear reactor was completed in 1972.

“Who would think that someone would have this imagination to envision an educational nuclear reactor on a university campus?” Hawari said. “The origin story makes me want to do more, and to rise up to those expectations.” 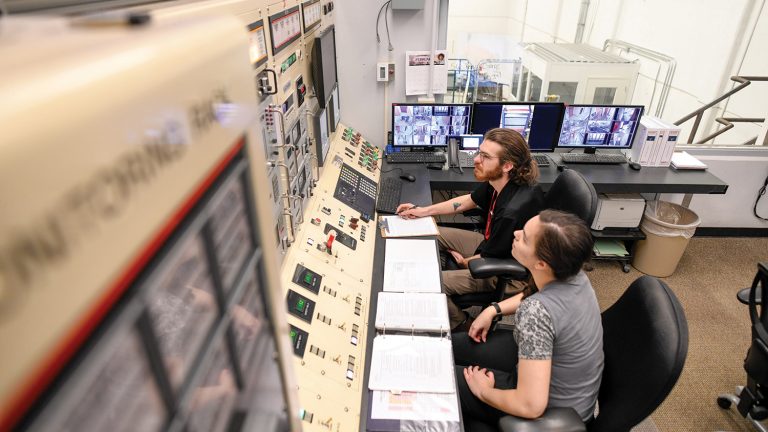 Today, NC State’s NRP is on a playing field of its own. The reactor’s core currently powers four research facilities located in the reactor beamports: a neutron imaging facility, a neutron powder diffraction facility, an intense positron beam and an ultra-cold neutron source. Additional beamport facilities are under development, and may be used in parallel with the reactor’s multiple in-pool irradiation facilities. Using this equipment, scientists conduct groundbreaking research in a world-class nuclear facility, which also happens to sometimes be run by undergraduate students.

Students may become licensed operators after completing two semesters of hands-on training at the PULSTAR and passing a two-day test administered by the Nuclear Regulatory Commission. Scott Lassell, nuclear services manager, said a great deal of effort goes into training the students, but their support is necessary.

“For the past two years, there were long stretches of months at a time where we were running for three shifts, so the students were instrumental,” Lassell said. “Not only do they get the license qualification, they get valuable operations and research experience, too.”

While students are operating the controls and ensuring everything is running smoothly, scientists and officials from across the country — and globe — are using the PULSTAR for medical, military and environmental research. The Environmental Protection Agency, National Cancer Institute, and U.S. and British navies, as well as university researchers, run different experiments simultaneously.

Dr. David Thomas, a research toxicologist at the National Health and Environmental Effects Research Laboratory in Research Triangle Park, first used NC State’s reactor in 1972, the year he graduated from Duke University, for a project on mercury release caused by coal burning.

He returned to the reactor in the 2000s for research on the quantitation of toxins in biological and environmental samples. EPA researchers initially used neutron activation analysis (NAA) to measure arsenic in toenail samples from a U.S. population that used drinking water containing arsenic. This information helped them understand the relation between exposure to arsenic and its accumulation in the body. More recently, NAA has been used to study bioavailability of arsenic present in soil. Their data made it possible to develop and validate an assay that measures bioavailability, which helps guide cleanups of Superfund sites contaminated with arsenic.

“The growth and development at NC State have been remarkable,” he said.

The NRP has plans to keep growing its nuclear capabilities in order to meet research needs. It is in the process of increasing the PULSTAR reactor’s power from 1 megawatt to 2 megawatts. Additionally, researchers continue to look to the future, examining and developing advanced nuclear fuel concepts for the next generation of nuclear power reactors, measuring and generating fundamental nuclear data to support studies of neutron interactions in matter, and developing capabilities and methods of radioisotope production for medical and industrial applications.

The reactor’s history and pioneering spirit — the inspiration to do something unprecedented, to take what was regarded as a secretive and destructive technology and develop an open, educational facility that enables research to better humankind — underlies the progress NC State’s NRP continues to make.

“History probably helped in the culture of accepting a nuclear reactor on campus,” Hawari said.

If he were to develop a nuclear reactor facility now, Hawari said he probably couldn’t do it the way it was done in 1949, putting it in the middle of a college campus. But its location makes it unique and integral to the university and to North Carolina.

“We turned it into a facility that is relevant in the portfolio of science and engineering right now, and especially high-tech engineering because engineering is moving toward nanoscale and microscale engineering,” Hawari said. “We’re aiming to develop capabilities that are useful and unique.”