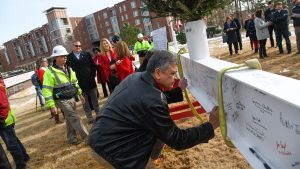 The College of Engineering celebrated progress on the new Fitts-Woolard Hall on Dec. 12 with a Topping Off Celebration and lunch.

The event marked the placing of the highest, but not last, steel beam in a new building’s frame. Skanska USA, construction manager at risk for the Fitts-Woolard Hall (FWH) project, held the event to honor the work of the designers, engineers and tradesmen who have contributed to the project. They were joined by students, faculty members, administrators and alumni of the College of Engineering for the morning ceremony, which was followed by a barbecue lunch inside the structure.

“Everybody here today has this building and the whole effort in their heart,” said Dr. Louis Martin-Vega, dean of the College.

Fitts-Woolard Hall is the newest engineering building on NC State’s Centennial Campus. Scheduled to open in summer 2020, it will be the new home of the Department of Civil, Construction, and Environmental Engineering; the Edward P. Fitts Department of Industrial and Systems Engineering; and the Dean’s Administration.

During remarks, Martin-Vega described the new building as “a lot more than bricks and mortar and steel beams.” Fitts-Woolard Hall will continue the College’s progress toward a complete relocation to Centennial Campus, giving students and faculty members access to some of the world’s best facilities and helping NC State Engineering reach its full potential.

“When people ask me how it’s going I say ‘it’s going great, we have a lot of alums who have their heart in it,” Martin-Vega said. “That is what really makes this different.”

“At the end of the day, we can all walk away from this having taken authorship of this in some fashion,” he said. 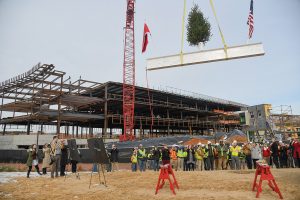 Such ceremonies date back to 700 A.D., when workers began placing a small evergreen tree on a new structure to mark building progress. It was also thought to serve as a good luck omen.

The high beam, which sits at the top of an elevator shaft in the building, was painted white. It was placed on two NC State red saddle horses on the morning of the 12th, and workers and NC State students, faculty and administrators were invited to sign it. A Christmas tree and NC State and American flags were also attached to the beam.

Martin-Vega attached a red NC State ornament to the tree with a zip tie before a crane lifted the beam to the top of the building frame, where three workers were ready to bolt it into place.

Fitts-Woolard Hall represents a new paradigm for NC State, using a public-private partnership to fund the construction of an academic building. Construction is being funded, in part, by the proceeds of state bonds approved by North Carolina voters in 2016. The College pledged to raise $60 million in private funding and is still seeking donations of $12.8 million.

Earlier this year, the building was named for two alumni, Edward P. Fitts and Edgar S. Woolard, who together made a $25 million donation toward construction.

To learn how you can help support the project, contact Griffin Lamb, assistant dean for development and college relations with the NC State Engineering Foundation, at grlamb@ncsu.edu or 919.515.7458. 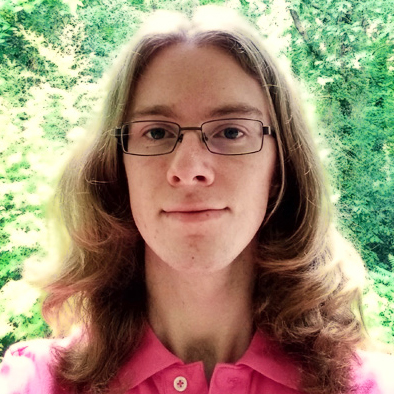