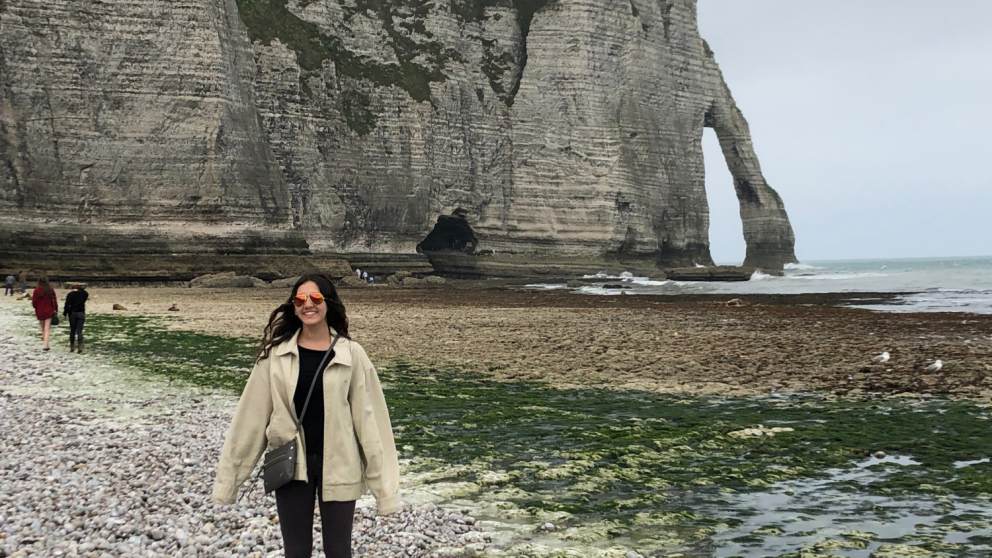 My best friend and I had actually been planning a trip to France for years in our heads, and when we heard about the program, I knew immediately that I had to go, one way or another. I have been studying French for 8 years and naturally wanted to become fluent in the language, so I knew immersion in the culture was my best chance. I also knew I would never get an opportunity again to visit such a beautiful country, study in one of its schools, observe its culture, surrounded by a group of peers with whom I would become pretty close, not to mention by best friend and my favorite French professor, all for such a great price.

Honestly, I learned how to be happy again. I don’t want this to sound dark, it was just that I had a lot of stress coming out of Sophomore year from juggling a lot of school work, 2 jobs, 2 clubs, and other personal responsibilities. I had just turned down an internship that was offered to me too late, and I wasn’t sure if I was taking the right path with the program. But I went, and the rest was history. At least for the first couple of weeks, I would turn to one of my new friends and said, “I don’t know about you, but that was the BEST day I’ve ever had.” Not even a week in to the program, I knew that I was exactly where I was supposed to be because I hadn’t felt this content or free in a long time. I essentially learned what it meant for myself to stop, relax, and just take it all in. One of my favorite parts, that wasn’t a destination, was that I built some unforeseeable relationships with not only students from the program but also actual French students. We were fortunate enough to stay in a residence hall across the street from the university we were studying at. In this hall were French students who attended the university throughout the year and who were taking summer classes. They were the most welcoming, amiable, and fun-loving group of students that I could have possibly met. They helped me practice my French; we, in turn, helped them with English. They taught me about the best ways to succeed in France and make the most of my visit. We ended up staying in contact with them and inviting them to the U.S. because this connection was one we didn’t want to let go of.

Be flexible. It is of course a different country, and no matter what you read or learn beforehand, there will always be discrepancies between the cultures that you cannot anticipate. I had to get used to a lack of air conditioning, accessible bathrooms, free water, and ice. For the first week, everyone was a little more on edge and dehydrated than they were used to. But once everyone took a minute to accept the difference in France’s practices, we learned how to work around and adjust our expectations until the culture shock subsided. It helps to remember that this type of response to change is normal, and you can better respond to it by being aware, not of all culture differences but of how to best react to a challenging scenario.

How were your classes abroad different than if you would have taken them at NC State? Did you take any field trips or do anything outside of the traditional classroom? My classes abroad were lead with a different teaching style. One of my classes gave very few homework assignments, while my other gave none. Our grade was largely comprised of either a couple tests and a final, or just a final, and then participation was 20%. My French professor used a meticulous system of correcting errors rather than validating students or congratulating them for great work. As American students, this can seem discouraging or mean, but I got used to it pretty quickly and allowed it to fuel me to be a better student.

I also went on a few outside-of-the-classroom excursions during my first week which ranged from visiting war memorials to museums to basically mountain climbing. My program also took us to a different city in Belgium every Wednesday over a 3 week span, so I was able to contrast what I knew about the United States in comparison with France and then apply that to Belgium to see how they were all different but uniquely amazing. I came back from each attraction or city with some of the most beautiful photos and memories that I now have to look back at when I’m missing the program.

I could stay in France forever, and I would most certainly go on another NC State study abroad program if it were to fit into my schedule and budget.