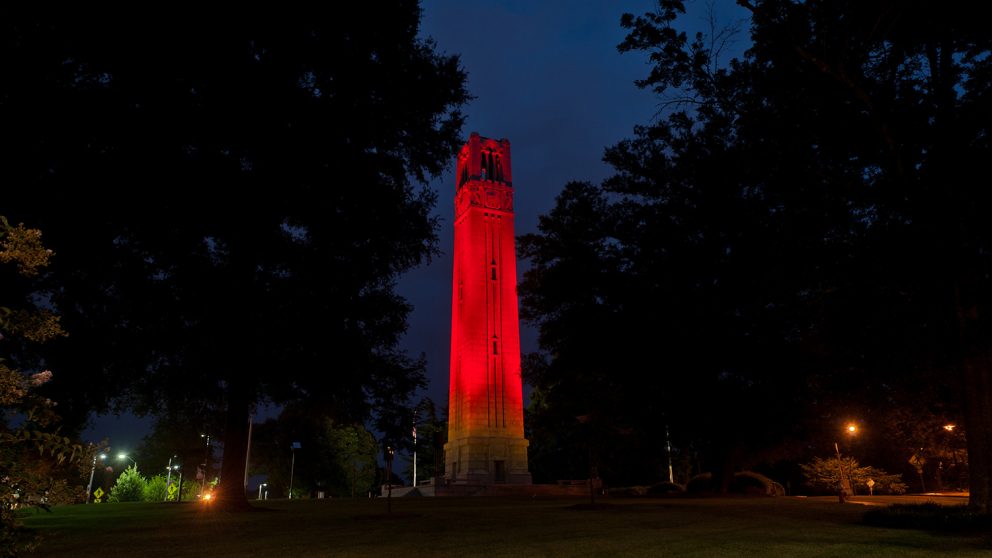 The Memorial Belltower, completed in 1937 as a monument to honor NC State alumni killed in World War I, serves as a campus landmark and rallying point for the University community to celebrate NC State’s successes.

Though the cornerstone was placed in 1921 with 10-foot sections added in 1924, 1925 and 1926, work was delayed by the Great Depression and then again by World War II. Stonework was finished in 1937 thanks to the federal Works Progress Administration. Student honor societies and the class of 1938 donated the clock, and the class of 1939 purchased a set of floodlights.

Finishing touches, including the chimes, shrine room and memorial plaque, were completed in the late 1940s and a formal dedication was held on Nov. 11, 1949.

The Belltower is lit red for holidays that honor our veterans, such as Memorial Day and Veterans’ Day, and to celebrate NC State’s proudest occasions and achievements. The list of occasions eligible for a lighting include honorable awards and achievements for faculty and staff members and students, athletics victories and campus events such as spring and winter commencements and the Celebration of Faculty Excellence.

The College of Engineering had several of its achievements recognized with Belltower lightings during the 2017-18 academic year:

May 8, 2018
Election of Dr. Donald Bitzer, Distinguished University Research Professor in the Department of Computer Science, to the National Academy of Inventors.

May 4, 2018
Awarding of the Goldwater Scholarship to aerospace engineering student Madison Maloney.

November 8, 2017
Election of Dr. Paul Turinsky, professor in the Department of Nuclear Engineering, to the National Academy of Engineering.

October 12, 2017
Election of Dr. Jay Narayan, John C. C. Fan Distinguished Professor in the Department of Materials Science and Engineering, to the National Academy of Engineering.