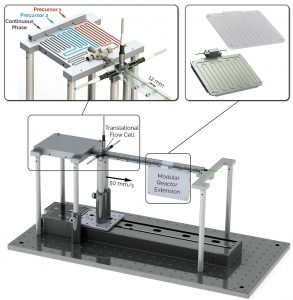 Researchers have developed a technique that allows users to collect 100 times more spectrographic information per day from microfluidic devices, as compared to the previous industry standard. The novel technology has already led to a new discovery: the speed of mixing ingredients for quantum dots used in LEDs changes the color of light they emit — even when all other variables are identical.

“Semiconductor nanocrystals are important structures used in a variety of applications, ranging from LED displays to solar cells. But producing nanocrystalline structures using chemical synthesis is tricky because what works well on a small scale can’t be directly scaled up — the physics don’t work,” says Dr. Milad Abolhasani, an assistant professor of chemical and biomolecular engineering and corresponding author of a paper based on this work.

“This challenge has led to an interest in continuous nanomanufacturing approaches that rely on precisely controlled microfluidic-based synthesis,” Abolhasani says. “But testing all of the relevant variables to find the best combination for manufacturing a given structure takes an extremely long time due to the limitations of the existing monitoring technologies — so we decided to build a completely new platform.”