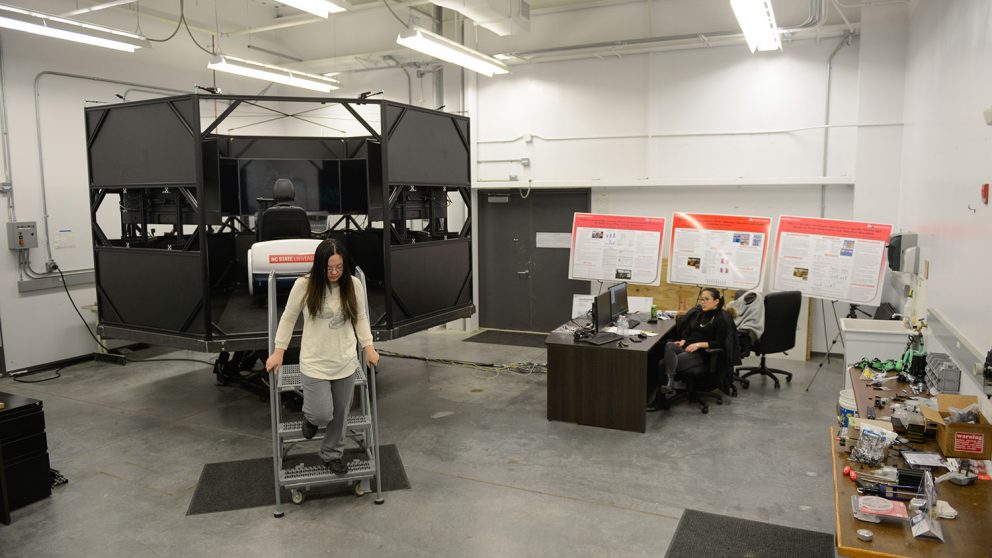 NC State researchers have long had access to driving simulators that measure test subject response time, level of distractedness and how they prioritize assigned tasks.

But those simulators don’t move.

“They’re useful for getting some general insights into driver visual behavior and performance under different roadway conditions and stimulus conditions but, unfortunately, the observations on steering behavior and braking can deviate from what occurs in the real world,” said Dr. David Kaber, Distinguished Professor in the Edward P. Fitts Department of Industrial and Systems Engineering (ISE).

A new simulator housed in ISE, funded by the department and the NC Department of Transportation (DOT), the Department of Psychology and NC State’s Institute for Transportation Research and Education (ITRE), offers a more realistic experience for test subjects and more generalizable research results. Beyond that, using a moving simulator reduces the potential for motion sickness some participants feel in a static simulator when their mind thinks their body should be moving but it isn’t.

Sitting in a realistic car cab, the test subject is surrounded by ultra-high-definition television monitors, which don’t exhibit time lag in presenting a driving scene that is experienced with projection systems.

“There’s no separation of the visuals from the motion,” Kaber said. “It’s really about very accurate simulation of real vehicle behavior.”

Cameras measure all of a subject’s physical movements, including how they shift in the seat under certain conditions and where their eyes go. 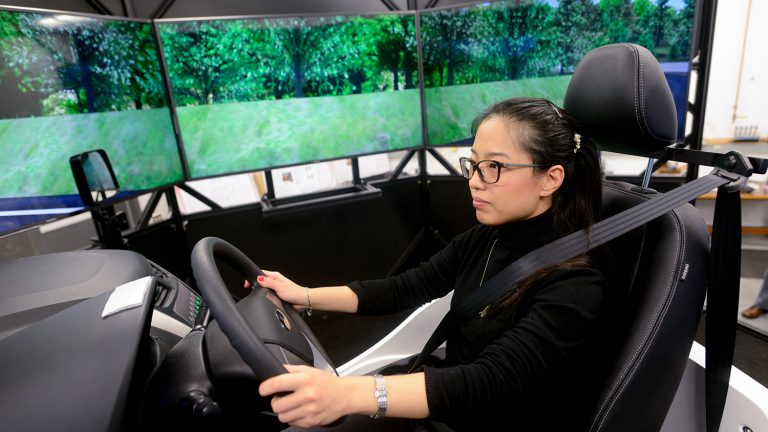 ITRE and the DOT are using the new simulator to model how drivers deal with certain road configurations and traffic signs and plan to use the data to help design roadways.

Dr. Jing Feng, an assistant professor in the Human Factors and Applied Cognition Program within the Department of Psychology, conducts research on driver mind wandering, automated driving, and aging and driving. She is part of a collaborative research effort with ISE and ITRE that is examining attentional demands of in-vehicle messaging systems, which will become more common in new vehicles and may subtract from driver roadway awareness.

The simulator was designed with an open cab rather than a closed one that closely resembles being in a car. The hope is that the set up will also be used for simulations outside of driving, including for pilots or utility plant operators. 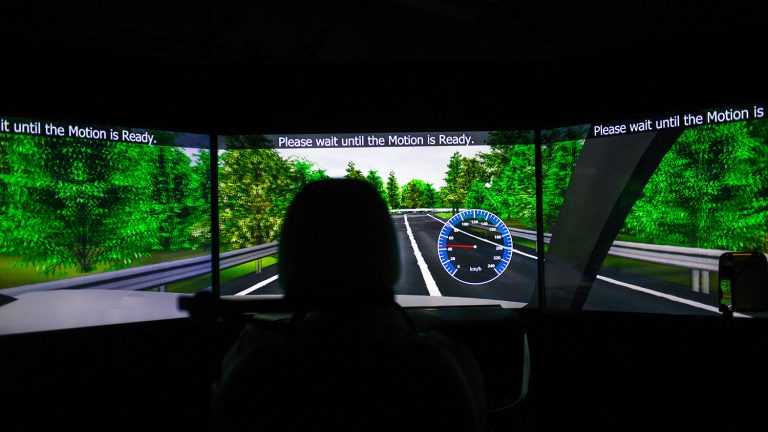 ISE has been studying driver distractedness since 2005, starting with tests of drivers using handheld cell phones behind the wheel.

Then ISE researchers looked at how distraction affected the capabilities of drivers of different ages in dealing with roadside hazards. They tested drivers to see whether monetary motivations (e.g., pay per shipment delivery) during simulated driving affected driving habits, specifically risk-taking behaviors. The drivers were compensated in different ways to make for a realistic simulation and safety margins varied with compensation.

A lengthy study done for the DOT examined whether increasing the number of business logos presented on “blue” highway signs, identifying businesses located at a next exit, would be more distracting to drivers and cause a safety hazard. The manner of driver use of logo signs was found to be a major factor in an absence of additional distraction.

As manufacturers add more and more automation to vehicles with an eye toward fully autonomous driving, research in the field will gravitate toward examining risks associated with these systems, Kaber said. How effective would a driver riding in a semi-autonomous vehicle and reading a book be if they needed to suddenly take the wheel because of an accident in the road?

“People during driving start to rely more and more on the automation, and they become complacent,” he said. “Then when something bad happens, they are less prepared than they would be otherwise if they weren’t relying on the automation. Future research needs to map the design of advanced vehicle automation to driver behaviors in order to support safe and effective vehicle control.”