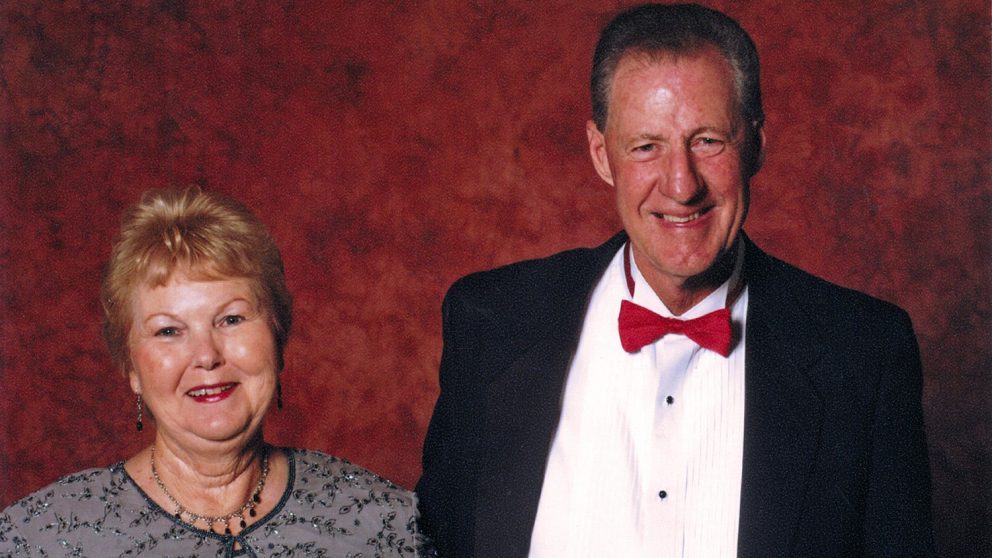 Since he left campus in 1960 with a bachelor’s degree in chemical engineering, NC State has called on Frank Culberson many times for help.

He has always responded.

Culberson and his wife, Doris, have donated to the College of Engineering to fund scholarships and named professorships. He has served on the NC State Engineering Foundation Board of Directors and as a chairman of a university-wide capital campaign.

Now, the Culbersons have donated to the College to help fund construction of Fitts-Woolard Hall,* NC State’s newest planned engineering research and instruction facility on Centennial Campus. The atrium in Engineering Building I, home of Culberson’s home Department of Chemical and Biomolecular Engineering (CBE), was dedicated as the Frank and Doris Culberson Atrium in November.

After graduation, Culberson worked with the Shell Oil Company/Shell Chemical Company and the Pace Company. He then joined and later led Rimkus Consulting Group, Inc., a forensic consulting company that performs engineering and business assessments concerning accidents, injuries and structural and mechanical failures.

The Culbersons established the S. Frank and Doris Culberson Academic Enhancement Fund to fund student scholarships and have endowed two professorships in CBE.

Culberson is a past president of the NC State Engineering Foundation and served four years as director of the NC State Achieve! fundraising campaign. He is now the College’s chairman for the University’s current Think and Do the Extraordinary campaign, which aims to raise $1.6 billion for the NC State endowment.

The Siler City, NC, native identified a need to help the College raise the funds necessary to complete Fitts-Woolard Hall early on. The College has pledged to raise $60 million in private money to help fund construction of the building, which will be the new home of the Department of Civil, Construction, and Environmental Engineering (CCEE) and the Edward P. Fitts Department of Industrial and Systems Engineering.

As a member and later president of the Engineering Foundation Board of Directors, Culberson made several visits to the College’s nine academic departments. He was struck by comparing Mann Hall, built in 1964 and the current home for CCEE, to the College’s three engineering buildings on Centennial Campus.

“You can’t believe the contrast between Mann and the kind of buildings you have on Centennial,” he said. “The facilities are amazing over there.”

Moving more of the College to Centennial will bring tremendous benefits, Culberson said, including in recruiting students and faculty members. Having the entire College together, instead of split on two campuses, will make it even stronger.

Culberson, a 2002 Distinguished Engineering Alumnus, entered what he refers to as semi-retirement from his most recent position with Rimkus as chairman of the board on July 31, 2017.

On a recent weekday morning, Frank Culberson was on a golfing trip in Pittsburgh. But his work helping the College was never far from his mind.

During a conversation about his commitment to the Fitts-Woolard Hall project, he mentioned how much he enjoys going with members of the Engineering Foundation staff to visit alumni in the Dallas and Houston areas.

He had with him a list of people to call to talk about the campaign for Fitts-Woolard Hall.

Harald Ade from the Department of Physics and Aram Amassian from the College of Engineering were named to a list of the world’s most highly cited researchers.

Biomechanics and design might seem like separate fields. But Alyssa Cox is mixing those two passions to find a career in athletic apparel and footwear innovation