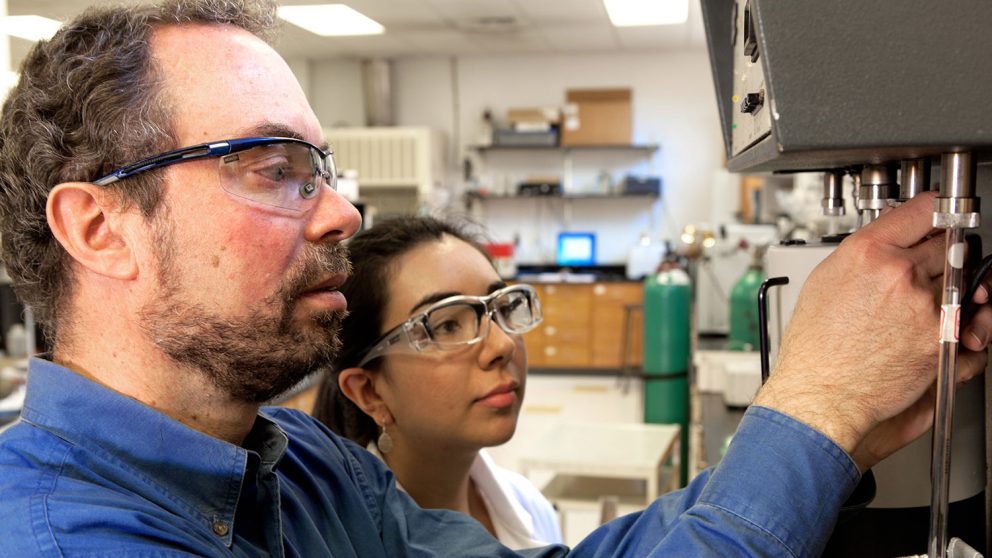 While searching for sources of bromide in the Cape Fear River watershed nearly five years ago, NC State environmental engineer Detlef Knappe and his team found more than they were looking for: high concentrations of a number of unexpected industrial chemicals in drinking water, including one — GenX — that has entered the popular vernacular in North Carolina.

While collecting samples for research on bromide occurrence in North Carolina, a team of undergraduate and graduate students led by Dr. Detlef Knappe, a professor of civil, construction, and environmental engineering, found something more in the water.

Sampling campaigns across the state led the team to collect surface water samples from the Cape Fear River, located in central and eastern North Carolina, where they encountered high levels of 1,4-dioxane and fluorochemicals, including a compound called GenX. Surface water in the Cape Fear River basin serves as a source of drinking water for approximately 1.5 million North Carolinians. 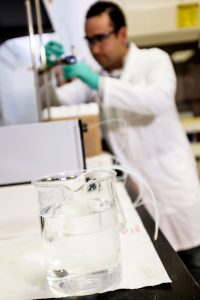 The U.S. Environmental Protection Agency (EPA) classifies 1,4-dioxane as a likely human carcinogen. Dioxane is an industrial solvent and a byproduct generated in the production of plastics, laundry detergents and shampoos.

According to a national survey of drinking water quality, some of the highest concentrations of dioxane in the United States were found in North Carolina. Knappe and his group found high levels of 1,4-dioxane in large stretches of the Cape Fear River basin and estimated that more than 1 million of the 1.5 million people who use the river as a drinking water source are impacted by the water pollution.

To develop an analytical method for detecting dioxane in river water and to identify sources of dioxane, Knappe and his team applied for a National Science Foundation (NSF) RAPID Grant.

Knappe’s group research efforts have helped to identify sources of dioxane and led state environmental regulators to develop plans for reducing the discharge of dioxane into waters of the Cape Fear River basin.

The research team worked with the NC Department of Environmental Quality (DEQ) and public water utilities to identify communities where industrial sources of dioxane are located. The collaboration involved coordinated sample collection between DEQ staff and NC State researchers and shared responsibilities for sample analysis. With a limited budget and no in-house capability to measure dioxane, DEQ could only send a small number of samples each month to a commercial laboratory. NC State’s ability to analyze large numbers of samples greatly enhanced the spatial resolution of the dioxane occurrence data set.

In addition to dioxane, Knappe and his team are studying new fluorochemicals in collaboration with researchers at EPA’s National Exposure Research Laboratory in the Research Triangle Park.

Fluorochemicals are used to make plastics, such as Teflon, stain repellents and firefighting foams. There is increasing evidence that traditionally used fluorochemicals are linked to adverse health outcomes including cancer and immunosuppression. In response, industry developed a wide array of fluorinated replacements, including the compound GenX, a polymer processing aid made by the Chemours Company at its Fayetteville Works facility, located approximately 90 miles upstream from Wilmington, NC.

Until the summer of 2017, wastewater from the facility contained high levels of fluorochemicals, including GenX and a number of structurally similar compounds.

“One problem with the GenX class of compounds is that they are not removed by conventional and many advanced drinking water treatment processes,” says Knappe. “We measured GenX levels of up to 4,500 parts per trillion at the intake of Wilmington’s water treatment plant, and the levels of other fluorochemicals were even higher. These compounds were on no one’s radar. Without research like ours, nobody would know that these chemicals are in the water.”

Knappe and his collaborators published their findings in a 2016 paper in Environmental Science and Technology Letters. Following the publication of an article in the Wilmington Star News in June 2017, local officials, residents in impacted communities and state regulators took notice.

Within a few weeks, Chemours agreed to stop discharging GenX and related compounds into the river. Chemours also stated that the Fayetteville Works plant had been releasing GenX as a manufacturing by-product for 37 years.

In November 2017, DEQ announced its intent to partially revoke Chemours’ permit to discharge process wastewater into the Cape Fear River. Now, fluorochemical concentrations in Wilmington-area drinking water have dropped by approximately 99 percent from the levels observed in June 2017.

“I am pleased that actions were taken quickly and that the level of fluorochemical pollution in the Cape Fear River and in the Wilmington area has decreased dramatically,” said Knappe. “But, it won’t erase 37 years of pollution.”

To determine potential health effects, Knappe is now part of a research team funded by the National Institute of Environmental Health Sciences that aims to study human exposure by measuring GenX concentrations in the blood and urine of Wilmington residents.

To address this need, Knappe’s group examined the removal of dioxane, GenX and other fluorochemicals from tap water with a focus on commercially available systems but also creating a custom filter.

“For the cocktail of emerging contaminants present in tap water derived from the Cape Fear River, I have recommended that residents install under-sink reverse osmosis filters to treat the water for drinking and cooking,” Knappe said.

Filters containing activated carbon were not effective for dioxane and their performance for fluorochemical removal was mixed. With recent funding from the NSF, the team is now working on developing new materials for removing fluorochemicals from tap water.