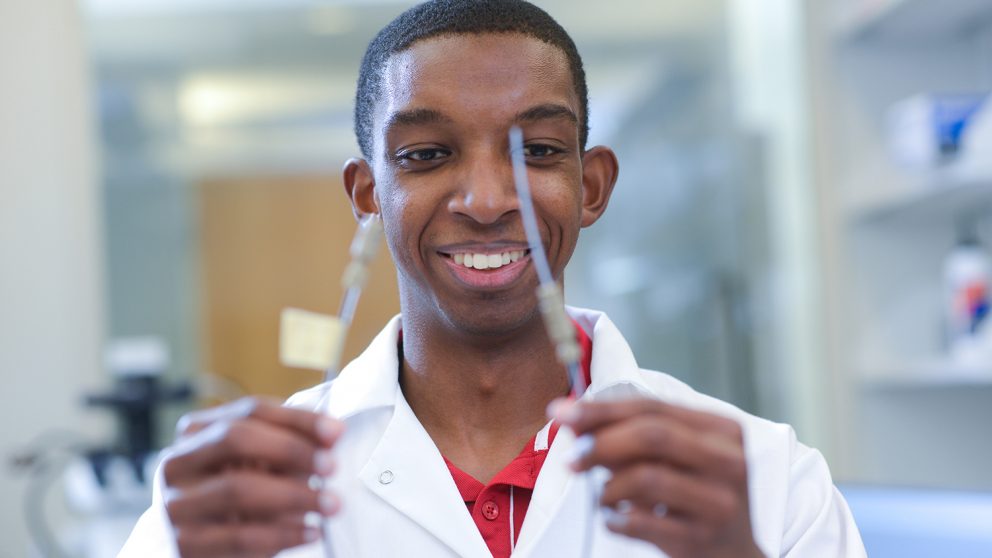 Kobi Felton, a North Carolina State University senior majoring in chemical and biomolecular engineering and minoring in Spanish, has been awarded a 2018 Marshall Scholarship.

Felton will use the two-year scholarship – which includes university fees, cost-of-living expenses, an annual book grant, thesis grant, research and daily travel grants, and fares to and from the United States – to pursue a master’s degree in chemical engineering at the University of Cambridge beginning in fall 2018 and then a master’s degree in nanomaterials at Imperial College London in the second year.

Felton is one of only 43 recipients nationwide. He is NC State’s third Marshall Scholar.

The Marshall Scholarship is awarded to select U.S. students with at least a 3.7 GPA who wish to pursue advanced degree studies in Britain. It is named after former Secretary of State George C. Marshall, who said that “a close accord between our two countries is essential to the good of mankind in this turbulent world of today, and that is not possible without an intimate understanding of each other.”

Born in the United States, Felton spent much of his childhood in the Middle East and Africa. He graduated from the American International School of Lagos in Nigeria and received NC State’s prestigious Park Scholarship. He is a Chancellor’s Aide and an Engineering Ambassador at NC State, and served as president of the university’s chapter of the National Society of Black Engineers. He also volunteered at the Consulate General of Mexico in Raleigh and served as a translator at a nonprofit.

Felton’s research interest is to use flow chemistry to create computer models that can predict efficient and environmentally friendly methods to manufacture products. He has interned at Eastman Chemical Company and ExxonMobil, and he completed a year-long National Science Foundation-funded undergraduate research program to create computer algorithms to develop stronger adhesives for the aerospace industry.

After his time in the U.K., Felton plans to get his Ph.D. in chemical engineering with a specialization in computer modeling and flow chemistry.