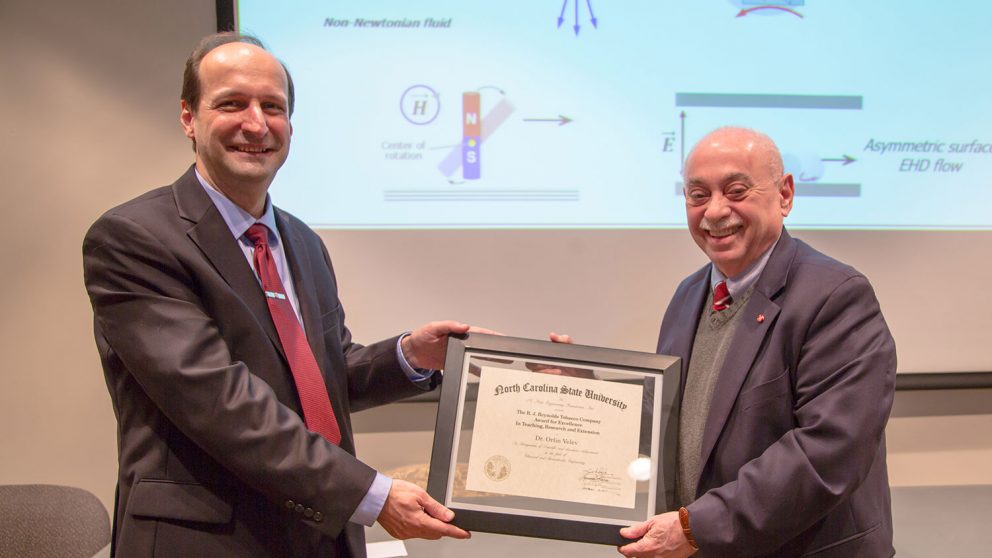 Dr. Louis Martin-Vega (r), dean of the College of Engineering, presents the 2017 RJR Award to Dr. Orlin Velev, INVISTA Professor in the Department of Chemical and Biomolecular Engineering at NC State. 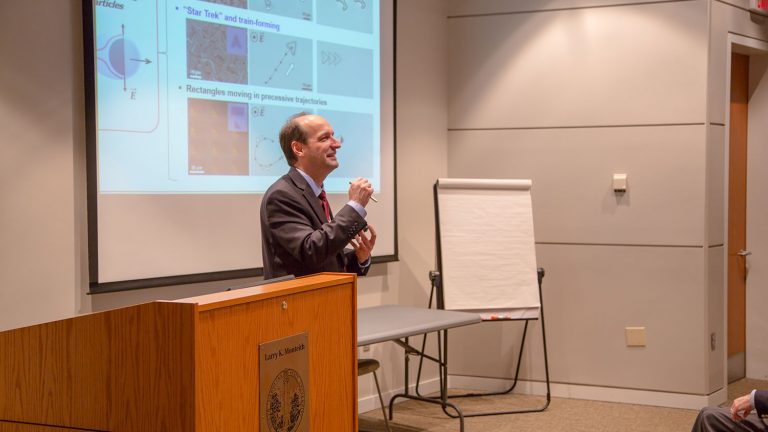 The award was established in 1981 within the College of Engineering to honor a member of the engineering faculty who has demonstrated superiority in several areas of activity that relate to the University’s three-fold mission of teaching, research and extension. The annual award is supported by the R.J. Reynolds Tobacco Company through the NC State Engineering Foundation to recognize scientific and educational achievements in fields of engineering. The recipient is given a $25,000 prize distributed over five years.

Velev is an established research leader in colloid science and engineering. He leads an active and multidisciplinary research group at NC State that focuses on colloids, microfluidics and nanoscience with an emphasis on controlled assembly of colloidal particles into advanced materials and microscopic functional structures.

His work and publications have led to the establishment of innovative research in the areas of nanostructures with electrical and photonic functionality, biosensors, microfluidics and nanomanufacturing. He has been the first to synthesize “inverse opals,” one of the most widely studied types of photonic materials today. He has also pioneered techniques for making novel nanoparticle materials, Janus particles, rod-like particles and responsive foams. Technologies based on his research have formed the basis of two Research Triangle-area startup companies, Xanofi and Benanova.

Velev has presented more than 220 invited presentations at major conferences and at universities and companies, contributed to more than 190 publications that have been cited more than 18,500 times, and developed and taught new graduate- and undergraduate-level courses, Colloid Science and Nanoscale Engineering and Special Topics in Nanoscience, both at NC State and TU-Berlin.

Since arriving at NC State, Velev has been actively involved in educating students. The Velev research group consists of undergraduate and graduate students working together with a focus on fundamental and exploratory projects in colloids, microfluidics and nanoscience. The major thrust is the controlled on-chip assembly of colloidal particles into advanced materials and microscopic functional structures. The research they are conducting could lay the foundation for future technologies for fabrication of chemical and biological sensors, photonic devices, microscale materials synthesis, bioelectronic interfacing and rapid fabrication of nanostructured coatings and materials.

Velev is one of seven NC State faculty members to receive a Chancellor’s Innovation Fund Award in 2017. With this award comes funding to help create more innovative discoveries from lab bench to the marketplace. Velev developed a new process for taking almost any polymer and converting it into extremely sticky particles while dramatically increasing its surface area. The patent-pending process does this without changing the chemical properties of the polymer. When dried, these particles can also be tweaked to make coatings and nonwovens that are very adhesive and able to either repel or attract water. He calls these modified polymers “gecko leg” particles, as their surfaces mimic the sticky legs of the lizard that are able to cling to almost any surface.

Velev is a leader in colloids, microfluidics and nanoscience while also advocating the incorporation of the latest achievements in the areas of nanoscience and nanotechnology into the engineering curriculum.

His commitment to excellence makes him a deserving recipient of the R.J. Reynolds Award.