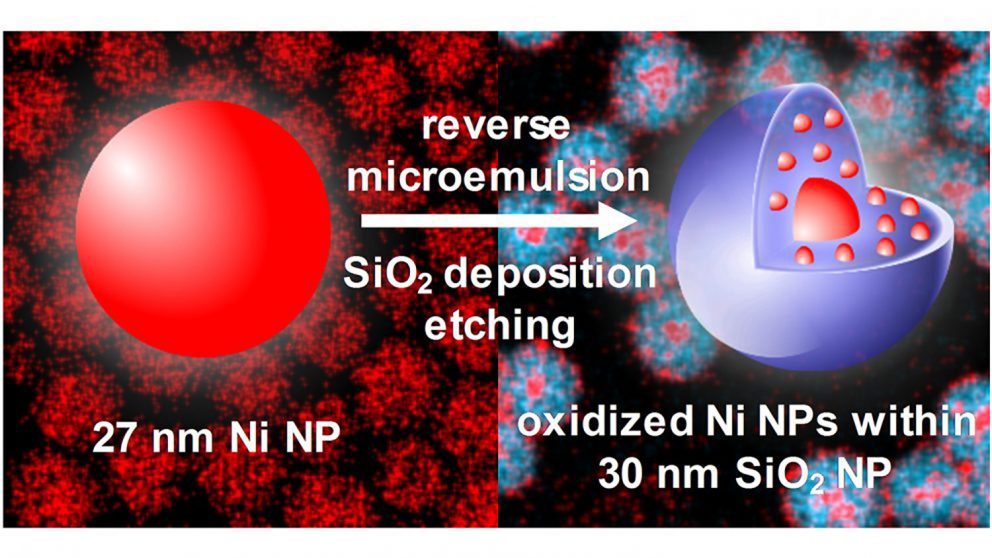 During deposition of a silica shell onto Ni nanoparticles, they are etched, oxidized, and embedded in the silica, which stabilizes the structure during oxidation and reduction. Image credit: Brian Lynch. Reproduced by permission of The Royal Society of Chemistry.

Researchers from North Carolina State University and the Air Force Research Laboratory have discovered that a technique designed to coat nickel nanoparticles with silica shells actually fragments the material – creating a small core of oxidized nickel surrounded by smaller satellites embedded in a silica shell. The surprising result may prove useful by increasing the surface area of nickel available for catalyzing chemical reactions.

“Nickel is noteworthy for its widespread applications in catalysis,” says Joe Tracy, an associate professor of materials science and engineering at NC State and corresponding author of a paper on the work. “One reason you’d want to coat nickel nanoparticles in porous silica is to embed them in a neutral substrate to maintain their efficiency as catalysts in chemical reactions. So the fact that this process could increase their surface area at the same time could prove to be beneficial.”

“At first we thought we’d made a mistake, but we were able to reproduce the result over and over again,” says Brian Lynch, a Ph.D. student at NC State and lead author of a paper on the work.

“When oxidized and reduced at high temperatures, we found that the core-and-satellite nickel nanoparticles did not significantly change size or shape, suggesting that they would function well in the environments needed to catalyze chemical reactions,” Tracy says.

“This was an unexpected discovery, but we’re happy with how it turned out.”

The paper, “Synthesis and Chemical Transformation of Ni Nanoparticles Embedded in Silica,” is published in the journal Nanoscale. The paper was co-authored by Bryan Anderson, a former Ph.D. student at NC State, and Joshua Kennedy of the Air Force Research Laboratory. The work was done with support from the National Science Foundation, under grants CBET-1605699 and DMR-1056653; the Air Force Research Laboratory Materials and Manufacturing Directorate, and the Air Force Office of Scientific Research, under grant 16RXCOR324.

“Synthesis and Chemical Transformation of Ni Nanoparticles Embedded in Silica”

Abstract: Ni nanoparticles (NPs) catalyze many chemical reactions, in which they can become contaminated or agglomerate, resulting in poorer performance. We report deposition of silica (SiO2) onto Ni NPs from tetraethyl orthysilicate (TEOS) through a reverse microemulsion approach, which is accompanied by an unexpected etching process. Ni NPs with an average initial diameter of 27 nm were embedded in composite SiO2-overcoated Ni NPs (SiO2-Ni NPs) with an average diameter of 30 nm. Each SiO2-Ni NP contained a ~7 nm oxidized Ni core and numerous smaller oxidized Ni NPs with diameters of ~2 nm distributed throughout the SiO2 shell. Etching of the Ni NPs is attributed to use of ammonium hydroxide as a catalyst for deposition of SiO2. Aliquots acquired during the deposition and etching process reveal agglomeration of SiO2 and Ni NPs, followed by dissociation into highly uniform SiO2-Ni NPs. This etching and embedding process may also be extended to other core materials. The stability of SiO2-Ni NPs was also investigated under high-temperature oxidizing and reducing environments. The structure of the SiO2-Ni NPs remained significantly unchanged after both oxidation and reduction, which suggests structural durability when used for catalysis.