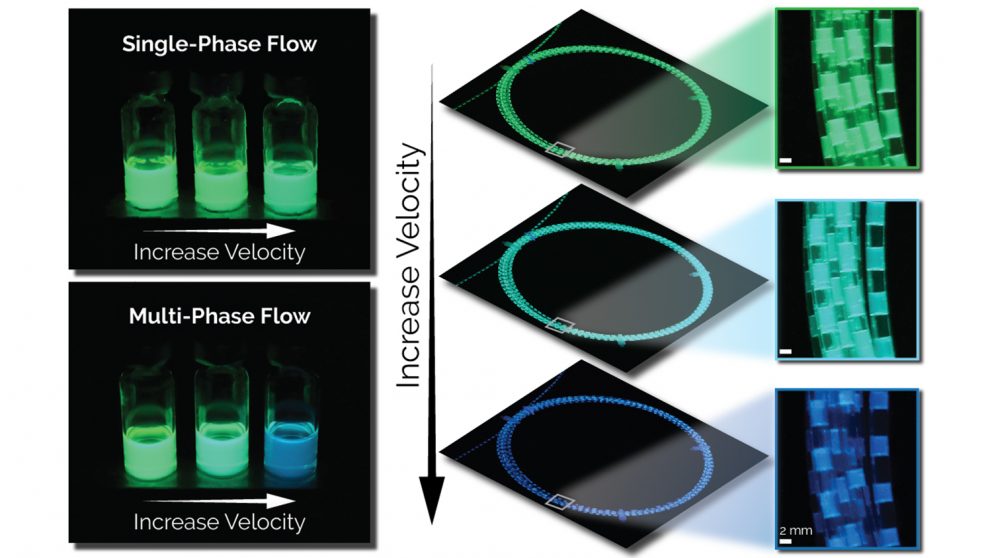 Researchers have developed a technique that allows users to collect 100 times more spectrographic information per day from microfluidic devices, as compared to the previous industry standard. The novel technology has already led to a new discovery: the speed of mixing ingredients for quantum dots used in LEDs changes the color of light they emit – even when all other variables are identical.

“Semiconductor nanocrystals are important structures used in a variety of applications, ranging from LED displays to solar cells. But producing nanocrystalline structures using chemical synthesis is tricky, because what works well on a small scale can’t be directly scaled up – the physics don’t work,” says Milad Abolhasani, an assistant professor of chemical and biomolecular engineering at North Carolina State University and corresponding author of a paper on the work.

“This challenge has led to an interest in continuous nanomanufacturing approaches that rely on precisely controlled microfluidic-based synthesis,” Abolhasani says. “But testing all of the relevant variables to find the best combination for manufacturing a given structure takes an extremely long time due to the limitations of the existing monitoring technologies – so we decided to build a completely new platform.”

To monitor both fluorescence and absorption you’d need two separate monitoring points. And, being fixed in place, people would speed up or slow down the flow rate in the microfluidic channel to control the reaction time of the chemical synthesis: the faster the flow rate, the less reaction time a sample has before it hits the monitoring point. Working around the clock, this approach would allow a lab to collect about 300 data samples in 24 hours.

Abolhasani and his team developed an automated microfluidic technology called NanoRobo, in which a spectrographic monitoring module that collects both fluorescent and absorption data can move along the microfluidic channel, collecting data along the way. The system is capable of collecting 30,000 data samples in 24 hours – expediting the discovery, screening, and optimization of colloidal semiconductor nanocrystals, such as perovskite quantum dots, by two orders of magnitude. Video of the automated system can be seen at https://www.youtube.com/watch?v=FBQoSDdn_Uk.

And, because of the translational capability of the novel monitoring module, the system can study reaction time by moving along the microfluidic channel, rather than changing the flow rate – which, the researchers discovered, makes a big difference.

Because NanoRobo allowed researchers to monitor reaction time and flow rate as separate variables for the first time, Abolhasani was the first to note that the velocity of the samples in the microfluidic channel affected the size and emission color of the resulting nanocrystals. Even if all the ingredients were the same, and all of the other conditions were identical, samples that moved – and mixed – at a faster rate produced smaller nanocrystals. And that affects the color of light those crystals emit.

“This is just one more way to tune the emission wavelength of perovskite nanocrystals for use in LED devices,” Abolhasani says.

NC State has filed a provisional patent covering NanoRobo and is open to exploring potential market applications for the technology.

The paper, “Automated microfluidic platform for systematic studies of colloidal perovskite nanocrystals: towards continuous nano-manufacturing,” is published in the journal Lab on a Chip, as part of its Emerging Investigators series. Lead author of the paper is Robert Epps, a Ph.D. student at NC State. The paper was co-authored by Kobi Felton, an undergraduate at NC State, and Connor Coley, a graduate student at MIT. The work was done with support from NC State and the UNC Research Opportunities Initiative.

Abstract: Colloidal organic/inorganic metal-halide perovskite nanocrystals have recently emerged as a potential low-cost replacement for the semiconductor materials in commercial photovoltaics and light emitting diodes. However, unlike III–V and IV–VI semiconductor nanocrystals, studies of colloidal perovskite nanocrystals have yet to develop a fundamental and comprehensive understanding of nucleation and growth kinetics. Here, we introduce a modular and automated microfluidic platform for the systematic studies of room-temperature synthesized cesium–lead halide perovskite nanocrystals. With abundant data collection across the entirety of four orders of magnitude reaction time span, we comprehensively characterize nanocrystal growth within a modular microfluidic reactor. The developed high-throughput screening platform features a custom-designed three-port flow cell with translational capability for in situ spectral characterization of the in-flow synthesized perovskite nanocrystals along a tubular microreactor with an adjustable length, ranging from 3 cm to 196 cm. The translational flow cell allows for sampling of twenty unique residence times at a single equilibrated flow rate. The developed technique requires an average total liquid consumption of 20 μL per spectra and as little as 2 μL at the time of sampling. It may continuously sample up to 30,000 unique spectra per day in both single and multi-phase flow formats. Using the developed plug-and-play microfluidic platform, we study the growth of cesium lead trihalide perovskite nanocrystals through in situ monitoring of their absorption and emission band-gaps at residence times ranging from 100 ms to 17 min. The automated microfluidic platform enables a systematic study of the effect of mixing enhancement on the quality of the synthesized nanocrystals through a direct comparison between single- and multi-phase flow systems at similar reaction time scales. The improved mixing characteristics of the multi-phase flow format results in high-quality perovskite nanocrystals with kinetically tunable emission wavelength, ranging as much as 25 nm at equivalent residence times. Further application of this unique platform would allow rapid parameter optimization in the colloidal synthesis of a wide range of nanomaterials (e.g., metal or semiconductor), that is directly transferable to continuous manufacturing in a numbered-up platform with a similar characteristic length scale.