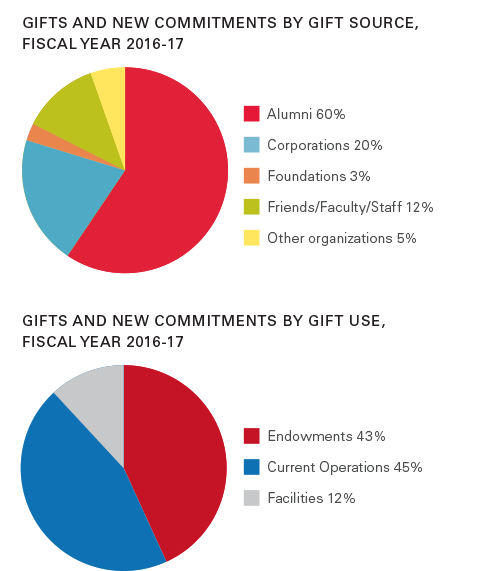 A large number of gifts were closed in the first quarter of the fiscal year, setting things up nicely for the kickoff of the $1.5 billion Think and Do the Extraordinary Campaign for NC State. This year, endowments were up by close to $3 million, and eight new professorships were established, bringing our total raised for the year to just under $23 million. Endowments to the College generally fall into one of these categories: scholarships/fellowships and professorships.

This was the second full year of the Campaign for Fitts-Woolard Hall,* and we launched the Dean’s Oval Club and the Dean’s Young Alumni Oval Club, giving more alumni and friends the opportunity to participate in the Oval Campaign. We have raised slightly more than $25 million for Fitts-Woolard Hall, with 35 DBOC members and 25 members of the Cornerstone Society for donors of more than $100,000.

The annual giving program for the College of Engineering raised a total of $1,492,968 for the College of Engineering Leadership Fund and all nine department enhancement funds. This represents a 0.7-percent increase from the previous year. The Dean’s Circle, the College’s leadership annual giving society, grew by 33 members, bringing our total membership to 454 alumni and friend donors, representing an 8-percent increase from the previous year. These gifts often represent our “pipeline” for major gifts and an important part of the College’s overall advancement plan.

The NC State Engineering Foundation, Inc., established in 1944, is the fundraising arm of the College of Engineering. For more information on the Foundation, including financial statements, audits and tax identification number, please visit: https://foundationsaccounting.ofa.ncsu.edu/foundations/nc-state-engineering-foundation-inc.