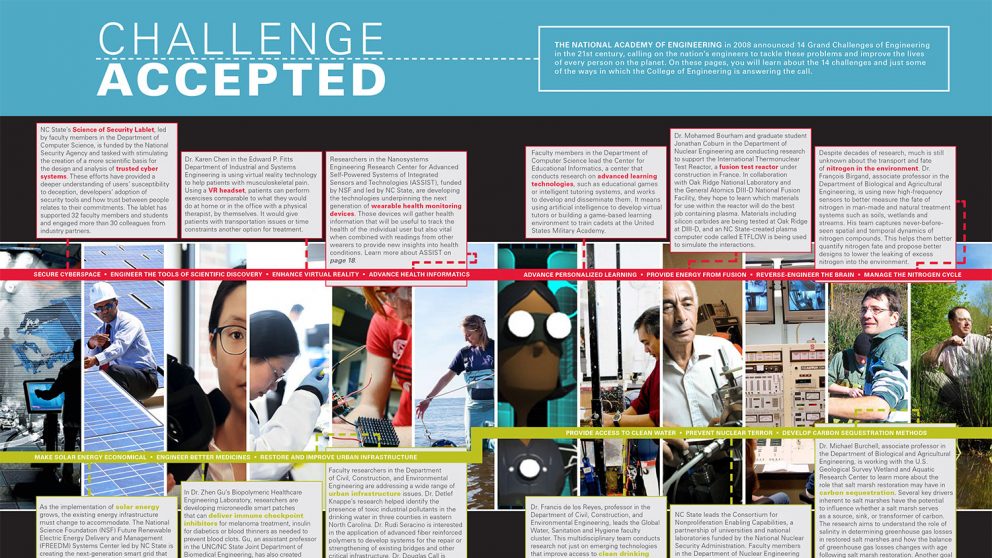 The National Academy of Engineering in 2008 announced 14 Grand Challenges of Engineering in the 21st century, calling on the nation’s engineers to tackle these problems and improve the lives of every person on the planet. In this story, you will learn about the 14 challenges and just some of the ways in which the College of Engineering is answering the call.

NC State’s Science of Security Lablet, led by faculty members in the Department of Computer Science, is funded by the National Security Agency and tasked with stimulating the creation of a more scientific basis for the design and analysis of trusted cyber systems. These efforts have provided a deeper understanding of users’ susceptibility to deception, developers’ adoption of security tools and how trust between people relates to their commitments. The lablet has supported 32 faculty members and students and engaged more than 30 colleagues from industry partners.

Dr. Karen Chen in the Edward P. Fitts Department of Industrial and Systems Engineering is using virtual reality technology to help patients with musculoskeletal pain. Using a VR headset, patients can perform exercises comparable to what they would do at home or in the office with a physical therapist, by themselves. It would give patients with transportation issues or time constraints another option for treatment.

Researchers in the Nanosystems Engineering Research Center for Advanced Self-Powered Systems of Integrated Sensors and Technologies (ASSIST), funded by NSF and led by NC State, are developing the technologies underpinning the next generation of wearable health monitoring devices. Those devices will gather health information that will be useful to track the health of the individual user but also vital when combined with readings from other wearers to provide new insights into health conditions. Learn more about ASSIST.

Faculty members in the Department of Computer Science lead the Center for Educational Informatics, a center that conducts research on advanced learning technologies, such as educational games or intelligent tutoring systems, and works to develop and disseminate them. It means using artificial intelligence to develop virtual tutors or building a game-based learning environment to train cadets at the United States Military Academy.

Dr. Mohamed Bourham and graduate student Jonathan Coburn in the Department of Nuclear Engineering are conducting research to support the International Thermonuclear Test Reactor, a fusion test reactor under construction in France. In collaboration with Oak Ridge National Laboratory and the General Atomics DIII-D National Fusion Facility, they hope to learn which materials for use within the reactor will do the best job containing plasma. Materials including silicon carbides are being tested at Oak Ridge at DIII-D, and an NC State-created plasma computer code called ETFLOW is being used to simulate the interactions.

Despite decades of research, much is still unknown about the transport and fate of nitrogen in the environment. Dr. François Birgand, associate professor in the Department of Biological and Agricultural Engineering, is using new high-frequency sensors to better measure the fate of nitrogen in man-made and natural treatment systems such as soils, wetlands and streams. His team captures never-before-seen spatial and temporal dynamics of nitrogen compounds. This helps them better quantify nitrogen fate and propose better designs to lower the leaking of excess nitrogen into the environment.

As the implementation of solar energy grows, the existing energy infrastructure must change to accommodate. The National Science Foundation (NSF) Future Renewable Electric Energy Delivery and Management (FREEDM) Systems Center led by NC State is creating the next-generation smart grid that can handle bidirectional power flow and a higher concentration of renewable resources like solar. Learn more about FREEDM.

In Dr. Zhen Gu’s Biopolymeric Healthcare Engineering Laboratory, researchers are developing microneedle smart patches that can deliver immune checkpoint inhibitors for melanoma treatment, insulin for diabetics or blood thinners as needed to prevent blood clots. Gu, an assistant professor in the UNC/NC State Joint Department of Biomedical Engineering, has also created a suite of “programmed” approaches for targeting the delivery of anti-cancer drugs, the release of which can be promoted inside the tumor microenvironment or cancer cells.

Faculty researchers in the Department of Civil, Construction, and Environmental Engineering are addressing a wide range of urban infrastructure issues. Dr. Detlef Knappe’s research helped identify the presence of toxic industrial pollutants in the drinking water in three counties in eastern North Carolina. Dr. Rudi Seracino is interested in the application of advanced fiber reinforced polymers to develop systems for the repair or strengthening of existing bridges and other critical infrastructure. Dr. Douglas Call is developing ways to recover resources, such as energy and nutrients, from wastewater and generating electricity from North Carolina’s coastal salinity gradients.

Dr. Francis de los Reyes, professor in the Department of Civil, Construction, and Environmental Engineering, leads the Global Water, Sanitation and Hygiene faculty cluster. This multidisciplinary team conducts research not just on emerging technologies that improve access to clean drinking water and adequate sanitation but on the global policy issues and socioeconomic and cultural barriers that might impede their implementation.

NC State leads the Consortium for Nonproliferation Enabling Capabilities, a partnership of universities and national laboratories funded by the National Nuclear Security Administration. Faculty members in the Department of Nuclear Engineering are developing the next generation of tools to detect the proliferation of nuclear weapons and training the experts to drive that new technology forward.

Dr. Michael Burchell, associate professor in the Department of Biological and Agricultural Engineering, is working with the U.S. Geological Survey Wetland and Aquatic Research Center to learn more about the role that salt marsh restoration may have in carbon sequestration. Several key drivers inherent to salt marshes have the potential to influence whether a salt marsh serves as a source, sink, or transformer of carbon. The research aims to understand the role of salinity in determining greenhouse gas losses in restored salt marshes and how the balance of greenhouse gas losses changes with age following salt marsh restoration. Another goal was to estimate the amount of carbon that could be stored in the system due to biomass accumulation after the losses of greenhouse gases were subtracted.