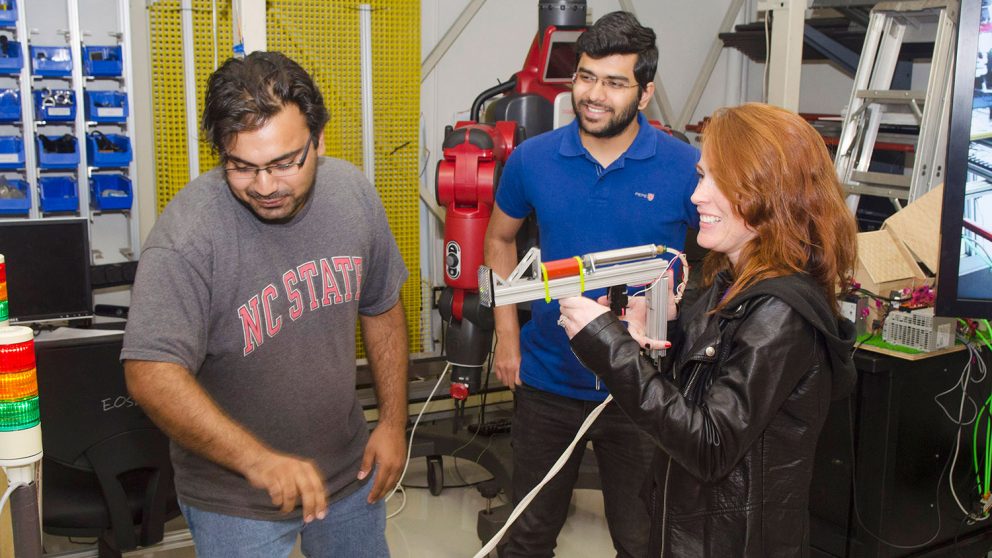 Growing up, Tamara Robertson had aspirations of becoming an attorney in the military, but a visit to NC State’s campus where she had the chance to sit in on an engineering class changed her mind and her life.

“I just fell in love almost immediately,” she said. “It’s a school that you feel at home at.”

As a transfer student to NC State, Robertson kept busy with extracurricular clubs that she was passionate about, including Engineers Without Borders and the American Institute of Chemical Engineers, and spent as much time as possible at the climbing wall in Carmichael Gymnasium. “There is nothing like the rock wall at NC State. I have been to other campuses that have climbing gyms, and I always tell people that if I could just go back to my alma mater and climb every night I would be happy.”

It’s a school that you feel at home at.

After earning her degree in chemical and biomolecular engineering in 2009 from NC State, her job path led her to an array of opportunities, including running a biodiesel plant at NC State, designing and building vaccine facilities, and wardrobe design for television and movies in Los Angeles.

Her most recognized job title, though, is as a finalist on “Mythbusters: The Search,” a reality television show that aired on the Science Channel in the spring of 2017 and globally throughout the spring and fall on Discovery. The show’s 10 contestants, Robertson included, were competing to determine who would be the replacements for previous Mythbusters Jamie Hyneman and Adam Savage.

As a contestant, she worked on myth-busting challenges such as figuring out if an ejection seat could be built that would shoot vertically out of a moving car and devising a system to use explosives to paint a room.

Robertson was not selected as a winner of the show but found many takeaways from her time as a contestant, including inspiring words from Savage: failure is always an option.

“When you go into a reality setting like the show where it’s a competition — for the first time as an engineer you start to fear failure. You start to think that if the experiment fails you are being sent home. But failure is an option, and sometimes we proved that the myth is correct, and other times we proved that it’s wrong or that it’s impossible to test and get a definitive answer. Both are options.”

For Robertson, the experience reiterated that as a scientist and engineer you have to be able to fail, because if you’re not willing to fail, you’re not going to innovate.

The biggest motivator for Robertson for auditioning and participating in the show was so she could be a role model for STEM girls and show that where your journey starts doesn’t define where it ends.

“My engineering degree is very different than the average person. I didn’t go the four-year route, I had to work full time, but at the end of the day, I got the degree, and I was able to do it,” she said. “Enabling children to be brave enough to try and to potentially fail, to teach them how to pick up the pieces afterwards, to see that working in the STEM field is an option — that’s what I find important.”