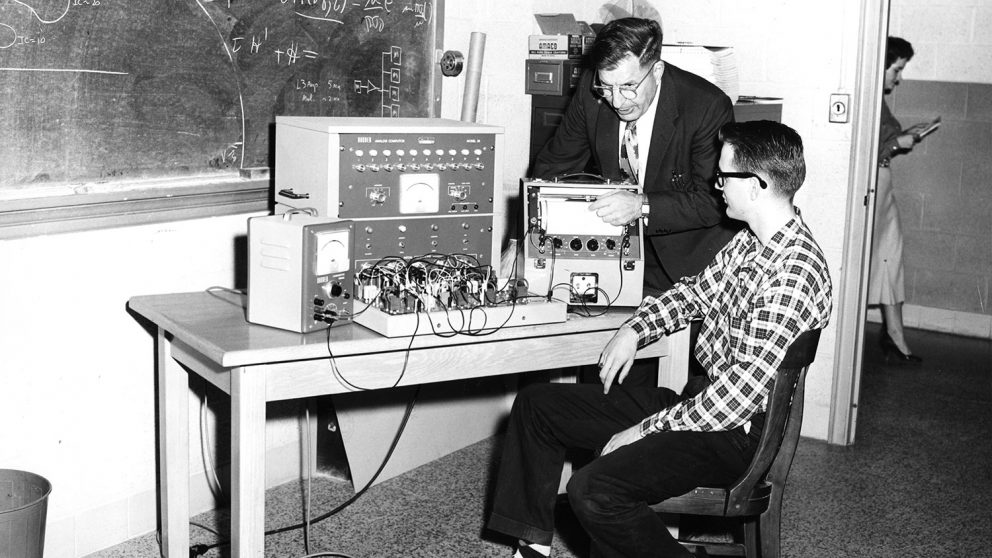 Computers – be it laptops, desktops or smartphones – are everywhere at NC State. But 60 years ago, there were only a few on the entire campus.

Manufactured by Donner Scientific Company, based in Berkeley, Calif., the Model 30 was a vacuum tube computer that featured a removable problem board and reset and hold circuits for five integrators. Two or more of the machines could be interconnected to work together.

He held close ties to the engineering departments and introduced several mathematics courses with numerous applications to engineering problems. He became an active member of the American Society for Engineering Education and was even the first recipient of a faculty award from the NC State chapter of the Tau Beta Pi engineering honor society.

Cell also played an instrumental role in the establishment of the Department of Computer Science at NC State. The department’s origins can be traced back to 1957, when the Department of Experimental Statistics placed computers in the basement of Patterson Hall.

He was part of an ad-hoc committee on computer science established in 1965 that included faculty members from mathematics, engineering, statistics and economics. Cell and Dr. Paul E. Lewis, director of the computer center in the Department of Mathematics, wrote a report for the committee that recommended reconstituting the computer center into the Department of Computer Science within the School of Physical Sciences and Applied Mathematics (later renamed Physical and Mathematical Sciences or PAMS).

The Department of Computer Science began instruction in fall 1967 with 21 declared majors and 460 students. Lewis was the first department head. The Department moved to the College of Engineering in 1989.

The department is marking its 50th anniversary this fall with several activities celebrating the occasion.