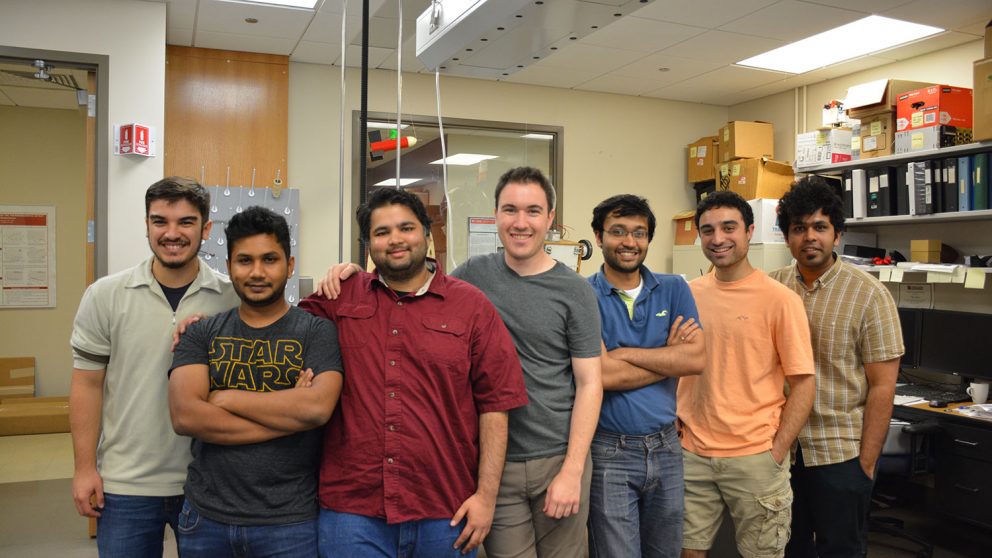 Beneath the harsh environment of the surface of Mars lies the key to the greatest human exploration yet: water.

Eight teams are challenged with building a prototype of a drill that can extract and purify water from subsurface ice deposits to enable sustained human presence on the planet. This drill must withstand extreme conditions on the Red Planet and have both manual and remote control capabilities.

The finalist teams notified of their selection in December 2016 included a team from NC State called Appetite for Ice.

The Mars Ice Challenge is a rigorous competition led by NASA’s Revolutionary Aerospace Systems Concepts – Academic Linkage (RASC-AL), a search engine for talent and ideas used in many NASA projects.

Kevin Ley, a doctoral candidate in aerospace engineering, is leading NC State’s team to prepare for technology demonstrations for in-situ resource utilization capabilities (ISRU) – the collection and processing of material by humans or robots during space exploration to replace material that would otherwise be transported from earth. In this case, the team is tasked with extracting water from simulated Martian subsurface ice to support the goal of a lasting human presence on Mars.

Appetite for Ice submitted a written proposal including 3D design models in November 2016 while taking a special topics course in space and explorations systems taught by Dr. Andre Mazzoleni, professor of mechanical and aerospace engineering. The graduate portion of the class was assigned to form groups and choose from three RASC-AL projects. Ley’s team chose the Mars Ice Challenge.

“When we decided to do the RASC-AL project initially, we knew being selected was a long shot and not a course requirement,” Ley said. “But, you can only succeed if you try.”

Despite the additional workload to an already stressful graduate life, Appetite for Ice has grown from a small team to 10 members and a faculty advisor, Mazzoleni.

Arthur Candido, a master’s student studying mechanical engineering, is excited to be part of a project that could send humans to another planet, adding that it gives him more educational opportunities. “I get to learn so many other things that I wouldn’t have learned in other courses,” he said, such as hands-on experience with machining.

Appetite for Ice’s project is composed of three subsystems: mechanics, microwave and electronics. Each subsystem has a leader who must build and adapt designs to the specifications set by RASC-AL as well as to the Martian environment. The remaining team members work diligently with the subsystem leaders to take ideas from paper to product.

Punnag Chatterjee, a doctoral student in mechanical engineering, leads the microwave subsystem, which will heat the ice and filter simulated Martian sediment (pitcher’s-mound clay and angular gravel) from the water. In the competition, the team will be evaluated on the volume and purity of the extracted water. Conditions on Mars such as the salty water and extreme temperature changes make the usage of a non-contact heating method like microwave attractive.

Candido leads the mechanics subsystem, which will drill through the simulated Martian surface and isolate the water once it is melted from the ice. The depth of the ice will be critical to the competition because each team must know when to switch from removing sediment beneath the surface to extracting the ice. To handle the extreme Martian temperatures, the prototype needs a pressurized system to keep the ice from sublimating in the atmosphere. Finally, the prototype cannot weigh more than 50 kg or draw more than 1200 W of power, according to competition constraints.

The Mars Ice Challenge contributes to the possibility of sending humans to the planet for exploration by enabling the return trip to earth, powered by the extracted and melted ice. Human colonization capabilities on Mars would also improve as a result of reliable methods of generating fresh water.

To turn these possibilities into reality, Appetite for Ice devotes a lot of time to meeting in the graduate lounge to discuss project details, assembling the prototype in Mazzoleni’s lab, and will eventually need to test the prototype before competing at NASA Langley Research Center, June 13-15, 2017. The team received a total of $17,750 in grant funding for materials, supplies and travel.

The competition is “really exciting and important,” Ley said, “it’s not often you can work on something that will have a large impact on how we explore space.”

Appetite for Ice continues to grow and seek members from different areas of study. An application to join the group can be found here.