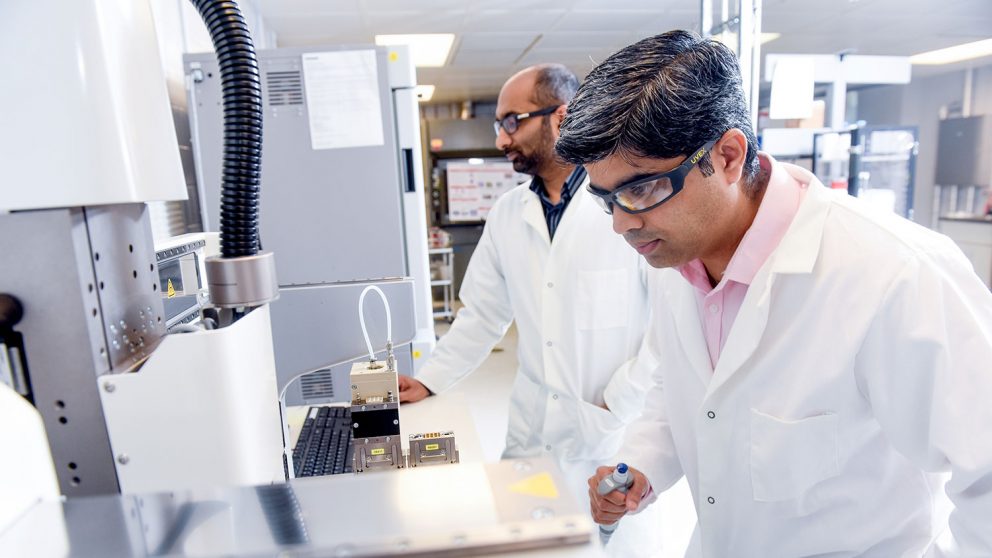 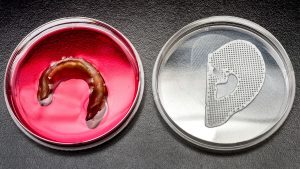 Dr. Binil Starly envisions a day when human cells enter one end of a completely automated, totally sterile production line and leave the other end as packaged tissue or organs that a surgeon will take directly to an operating room for implantation.

Helping make that vision a reality is a focus for Starly and other industrial engineers in the Edward P. Fitts Department of Industrial and Systems Engineering (ISE). Starly, an associate professor of regenerative medicine in the department, thinks a research version of such a lab could be located on the NC State campus in the next few years.

3D printing, in which layers of a material are deposited to manufacture a single object, has been around since the mid-1980s. Research on the use of 3D printers to create human tissue, starting with human stem cells and a scaffolding to help those cells grow in the correct configuration, began in the early 1990s.

Today, researchers around the world are working to manufacture skin, bone and vascular tissue, with the potential creation of functional complex organs like a heart or liver still years or even decades away.

Medical researchers can culture tissue from a patient and grow that tissue outside the body in order to test certain combinations of, for instance, a drug to fight breast cancer.

“It’s personalized to your tissue to see which drug combination would work and at which dosage,” Starly said.

It’s painstaking work. That’s where industrial engineers are needed, to scale up production.

“The shift that is happening now is moving from a very labor-intensive, expensive process to get the machines to do a lot of the harder work that humans are just not capable of doing,” he said.

A better use for belly fat

Using polymers and “bioinks” containing stem cells derived from the human fat that is the end product of liposuction treatments, Dr. Rohan Shirwaiker is working to rebuild tissues of the knee joint.

Shirwaiker, an assistant professor in ISE, is working on the manufacturing of multiple cartilaginous tissues of the knee joint, including the meniscus, which provides a cushion between the femur and the tibia. Joining him on the multidisciplinary meniscus engineering team are Dr. Matthew Fisher, assistant professor in the UNC/NC State Joint Department of Biomedical Engineering (BME) at NC State and UNC-Chapel Hill, and Dr. Jeffrey Spang, an orthopedic surgeon at UNC-Chapel Hill. Their team is also collaborating with Dr. Elizabeth Loboa, dean and professor of bioengineering at the University of Missouri, and other NC State and UNC faculty members on engineering the other knee tissues.

An important characteristic of these tissues is their highly specific network of collagen fibers. “This fibrous network created by cells is critical to the tissue’s function. While engineering these tissues in the lab, it is imperative that we replicate its organization using appropriate design and manufacturing strategies,” Shirwaiker said.

Their team has tested two approaches — using a 3D printed biodegradable polymer scaffold onto which cells attach and 3D bioprinting a hydrogel bioink containing the cells in the same geometry, but without the scaffold. So far, smaller prototypes tested in petri dishes or implanted in rats have provided a strong evidence of new tissue formation within four weeks. Most importantly, early results have shown that the collagen network characteristics in the engineered tissue can indeed be controlled by manipulating the scaffold design or bioink composition in conjunction with the bioprinting process parameters.

ISE researchers use machines that don’t vary much from traditional extrusion-based 3D printing machines. One key difference is the need to control temperature and the operating environment to a greater extent than with traditional 3D printing. The optimal temperature for working with cells is, unsurprisingly, 98.6 degrees Fahrenheit. A 3D printing machine the researchers use that is located on NC State’s Centennial Campus is set up inside a biosafety cabinet, much like a cleanroom, the kind of environment Starly envisions in the biomanufacturing assembly line of the future.

From concept to market

Taking a product to market and getting mankind closer to 3D printing major organs will be a long and complex process.

After more lab testing and animal trials, Shirwaiker’s work could potentially move on to Food and Drug Administration (FDA) human clinical trials. But, it’s a long and rigorous process that could take several years.

One of the challenges ahead as the field matures is finding a better way to test the quality and safety of tissue or an organ before it is implanted into a patient; current methods actually destroy the tissue or organ in order to test it. Should multiple versions of a product be produced at once so that one can be tested and another implanted? Whatever methods are developed, Starly said, time is of the essence.

“In a production-based environment, you can’t take four or five days to find out if this sample is good. It has to be fast.”

Like Starly, Shirwaiker envisions a future that seems like science fiction. He says we may see a day when bioprinted organs will include sensors that can alert a patient and their physician when something is wrong or even help the organ autocorrect.

To get there, we will need the kind of advances in multidisciplinary tissue engineering technologies, including bioprinting, that are being produced at NC State. Once the core technologies are perfected, Shirwaiker said, the types of cells used and the end-product organ desired can vary.

“Somebody making a bladder or a liver can still use the same fundamental principles and manufacturing methods but apply it for their cell types and their tissues,” he said. “At the end of the day, it will take synergistic efforts from universities, federal agencies, and the industry to help realize the promise of printed tissues and organs.”