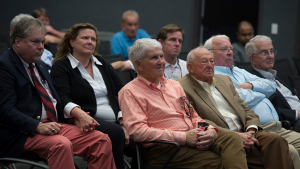 The College welcomed alumni back to campus for another homecoming celebration in late October. Rob Manning’s message to the assembled Wolfpack engineers and their families was simple.

“We’ll take your money, but what we need is your mind and your engagement,” Manning, then president of the NC State Engineering Foundation and a 1978 electrical engineering graduate, said at the event.

While fundraising is certainly important, especially as the University kicked off the “Think and Do the Extraordinary” campaign during the homecoming weekend, Manning told an audience in the James B. Hunt Jr. Library on NC State’s Centennial Campus that there are many ways to give back. As alumni connect back to the University, he encouraged them to remember where their degree came from and to learn more about how they can help.

“It’s important to be plugged into athletics and the alumni association,” he said. “If you want to make a difference, plug back into the College of Engineering.”

Think and Do the Extraordinary: The Campaign for NC State hopes to raise $1.6 billion over five years for scholarships, research, programs and facilities, making it the largest effort of its kind in the University’s history. The campaign kicked off with a gala at the renovated Reynolds Coliseum. 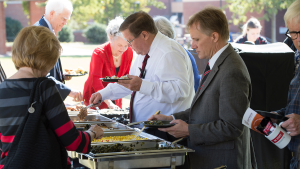 Earlier that day, engineering alumni enjoyed a barbecue lunch followed by a homecoming program that included insights into the impactful research being done in their College.

Dr. Francis de los Reyes, professor in the Department of Civil, Construction, and Environmental Engineering, described his work addressing a problem that affects 2.5 billion people globally — lack of access to adequate sanitation. Of those 2.5 billion people, about 1 billion defecate in the open, a problem with tremendous human health and environmental impacts. Millions more use pit latrines, which must be cleaned using methods that put workers at risk for disease.

Next, Dr. Veena Misra, Distinguished Professor of Electrical and Computer Engineering and director of the National Science Foundation Nanosystems Engineering Research Center for Advanced Self-Powered Systems of Integrated Sensors and Technologies (ASSIST), described the center’s work building wearable devices that are powered by the human body and provide important health data on the user’s health and surrounding environment.

Misra detailed several research components ASSIST is involved in as it works toward building an integrated health monitoring system: making the battery in a wearable last longer, creating lower-power sensors so that the system can communicate data to a smartphone or computer and pulling more power from the human body.

Winslow, a Ph.D. candidate in BME, and Lee, a laboratory manager in the department, explained that their work will benefit upper- and lower-limb amputees and patients with multiple sclerosis before putting the device into action as the assembled audience looked on.

Though Misra was speaking of the work in ASSIST, she summed up all of the research work presented when she said, “At the end of the day, we are working on something that will really have a global impact.”