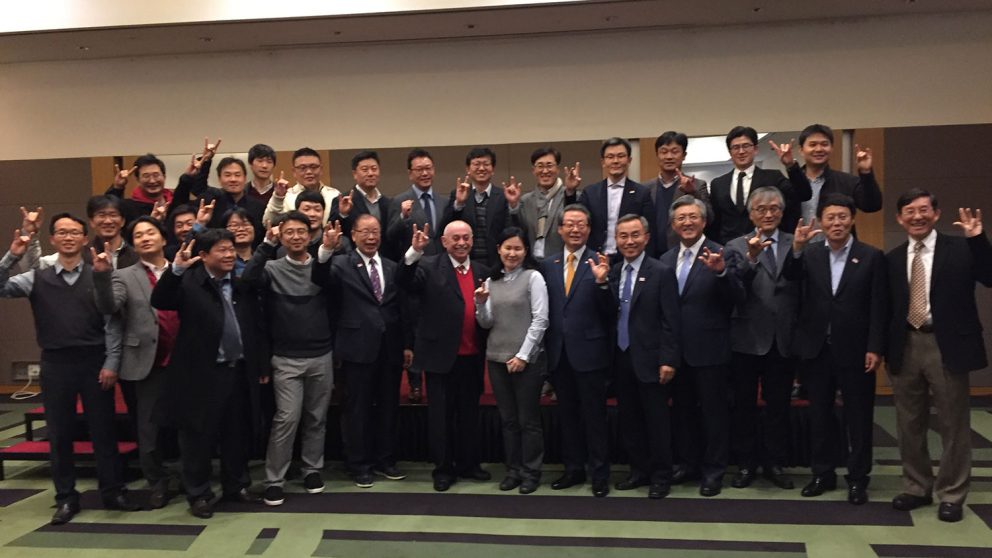 The College’s alumni are doing important work all over the country and world, including a sizable contingent in South Korea.

Many of those alumni and other professionals with ties to the College joined Dean Louis Martin-Vega and other College representatives during an event in Seoul, South Korea in November. It was the College’s first alumni event held in South Korea. 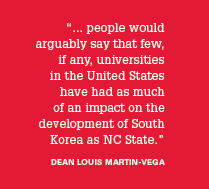 Martin-Vega participated in a panel discussion titled “Preparing Global Engineers for the Next Century” that Kim chaired. Martin-Vega was joined by Dr. Man-Sung Yim, professor and former department head in the Department of Nuclear and Quantum Engineering and director of the Nonproliferation Education and Research Center at the Korea Advanced Institute of Science and Technology (KAIST) and Dr. Wooil Lee of Seoul National University. Yim is a former associate professor and director of graduate programs in the Department of Nuclear Engineering at NC State.

An alumni reception was held at a hotel near the World Engineering Education Forum, and the visit included tours of KAIST and Hanyang University, two of the top schools in Korea.

The visit also included a tour of a Samsung Electronics facility. Dr. Injong Rhee is the company’s vice president in charge of software R&D and mobile communications business and a former professor in the Department of Computer Science at NC State.

During the university visits, Martin-Vega said the group was continually introduced to professors, deans and department heads with degrees from or ties to NC State.

According to President Lee, there is a chapter of the NC State Alumni Association in South Korea, and departmental alumni meet from time to time to “exchange information and remember our graduate student days at NC State.”

President Lee said there are several engineering faculty members with NC State ties at Hanyang. He estimated that about 500 NC State engineering alumni are working in the country.

More than a dozen of those alumni are Ph.D. graduates who worked under Dr. Richard Kim, a worldwide authority in the area of asphalt pavement materials. Many of those students keep in touch with each other and with Kim, he said, and jokingly refer to themselves as the “NC State mafia.”

“The students that I produced here at NC State went back to South Korea and really contributed to the improvement of Korean highway pavements,” said Kim, who earned a bachelor’s degree in civil engineering from Seoul National University and master’s and Ph.D. degrees in the same discipline from Texas A&M University.

“There were testimonials made at that alumni meeting where people would arguably say that few, if any, universities in the United States have had as much of an impact on the development of South Korea as NC State,” Martin-Vega said.