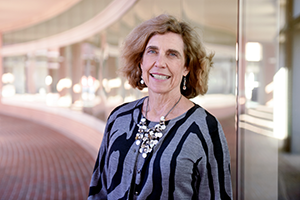 Dr. Frances Ligler, Lampe Distinguished Professor in the UNC/NC State Joint Department of Biomedical Engineering, is one of 15 2017 inductees into the National Inventors Hall of Fame.

Ligler is being recognized for her innovative application of emerging technologies in a variety of fields to make optical biosensors smaller, more versatile and more sophisticated. Thanks to her work conducted at the U.S. Naval Research Laboratory (NRL), biosensors have moved out of the lab and into use for food safety, disease diagnosis, pollution control and homeland security.

“I am humbled and honored to be in such great company,” Ligler said. “As an innovator that enjoyed hands-on, STEM activities in my early childhood years, I look forward to partnering with the National Inventors Hall of Fame to inspire the next generation of STEM innovators, especially young women, who aspire to be inventors in their own right.”

A biosensor is a device using biological molecules to detect a chemical or biological target. Ligler developed a new chemistry for attaching biomolecules on sensor surfaces that maintained their functionality far better than prior approaches and then integrated emerging technologies from a variety of fields to make optical biosensors smaller, more versatile, and more automated. The resulting biosensors have moved out of the lab and into food production plants, clinics in developing countries, pollutant cleanup sites, and areas of concern for military and homeland security.

In 1986, Ligler joined the NRL, where she and her colleagues developed automated biosensors, including point-of-use sensors for continuous monitoring. The biosensors were configured for manual addition of samples (sample in-answer out) or for automated sampling of air while flying on a drone or of water while deployed on an unmanned undersea vehicle. These biosensors provide quick results, identifying and quantifying pathogens, toxins, pollutants, drugs of abuse, or explosives.

During Operation Desert Storm, Ligler was instrumental in producing tactical sensors for botulinum toxin and anthrax. Ligler’s subsequent incorporation of microfluidic channels and miniaturized optics enabled portable devices into which users could simply inject a sample for testing. With the consequent small size and automation, the Ligler group demonstrated the first airborne biosensor for biological warfare agents. Ligler’s group developed the underlying technology for the RAPTOR portable, automated biosensor, tested by NATO for use in analyzing biological toxins and pathogens, and used to test water deliveries to U.S. Navy ships in Bahrain. A more advanced system incorporated an array of biological detector molecules to identify pathogens in food or indicators of disease in clinical samples.

Ligler joined the faculty at UNC and NC State in 2013.

The 2017 class was inducted during a Greatest Celebration of American Innovation two-day event on May 3 and 4 in Washington, DC.

Founded in 1973 in partnership with the United States Patent and Trademark Office, the National Inventors Hall of Fame is a nonprofit organization dedicated to recognizing inventors and invention.