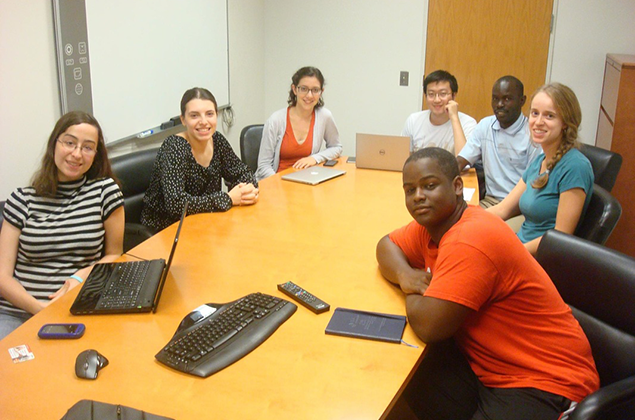 The visit gave Eneku a chance to interact with NC State students who are SciBridge volunteers.

John Paul Eneku, doctoral student at Makerere University in Kampala, Uganda, visited NC State University to advocate for more access to research for students in East Africa and to support collaborations with the SciBridge project (www.scibridge.org).

During his first trip to the United States, Eneku’s academic and cultural experience was filled with tours of laboratories, meetings, lectures and excitement to observe American politics during presidential elections, which he follows from his home in Uganda. Eneku’s visit was made possible by the NC State Office of International Affairs’ East Africa Strategic Initiative.

Eneku, from the Iteso tribe of Uganda, is an assistant lecturer in the Department of Physics at Makerere University. While visiting NC State, he gave a lecture on Sept. 19 titled “SciBridge: The African Story,” which detailed his life in Uganda and his leadership of the SciBridge project in Africa.

SciBridge is an outreach project co-founded by Eneku and Dr. Veronica Augustyn, assistant professor of materials science and engineering (MSE) at NC State, which is designed to increase communication and collaboration between the United States and African scientists in the area of sustainable energy. He and Augustyn met at the first Joint US-Africa Materials Institute in Ethiopia in 2012. Since then, Eneku and Augustyn have collaborated for SciBridge by email and webinars, which are sometimes used to produce live video lectures for African students who have completed an experiment with research kits developed and assembled by NC State students.

Augustyn said that SciBridge is more than an aid project or a “one-way street.” Students at NC State benefit from the opportunity to research and design the experiment kits, just as students in Africa benefit from the ability to conduct new research with the kits sent to them.

Eneku and Augustyn also co-wrote an article for Science & Diplomacy titled “Building the SciBridge between Africa and the United States.” They believe that scientific diplomacy is an important concept for collaborations with other cultures, especially in developing countries; learning the differences in cultural values is vital to successful collaboration.

Students and staff at Makerere University are excited to receive research kits and to conduct experiments that produce life-changing results for their country. Uganda has embraced renewable and sustainable energy as an affordable solution to its growth by distributing energy to rural areas that contain the majority of its population and as a solution to the effects of climate change. Three cities use wind turbines for small-scale street lighting including Kampala (the capital city), Entebbe and Mbarara.

Adding other sustainable energy sources will make it possible for the people of Uganda to create their own developed, modern lifestyles while preserving their natural environment.

Although research in Africa is limited, Eneku says that collaboration with SciBridge has boosted research on sustainable energy, allowing students to apply theoretical concepts in a hands-on way that has value to their daily lives. One advantage of the research kits is that they don’t have a limited lifetime; they can be reused and shared within the countries involved with SciBridge. He said that interested students at a high school in Uganda were also able to use the kits.

About 14 students are conducting projects with the kits in Eneku’s class and about 180 students across East Africa. His students have set up public exhibitions of their experiments, including at the 2014 UNESCO World Science Day at Makerere University.

During the two-week visit in late September, Eneku toured the Analytical Instrumentation Facility in the Monteith Research Center, the FREEDM Engineering Research Center, several labs including those of Augustyn, Dr. Douglas Call (Department of Civil, Construction, and Environmental Engineering) and Dr. Kenan Gundogdu (Department of Physics), along with visits with faculty members and administrators across the NC State campus. He also attended several lectures and departmental seminars.

Eneku said that he would like to possibly return so that he and Makerere University can remain connected with NC State. He said that students here have a very conducive learning environment, and despite being in a new culture and country, Eneku said, “I find that this is more like home.”