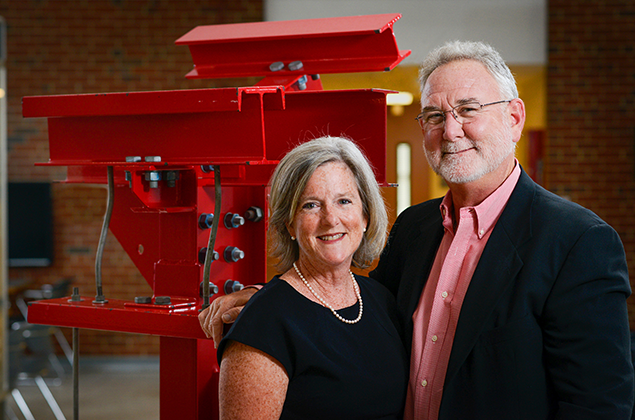 The funding goes a long way. But it won’t cover the entire cost of the $154 million building. That’s where alumni and friends of the College come in.

The College plans to raise $60 million in private funds to help build the new home of the Edward P. Fitts Department of Industrial and Systems Engineering (ISE), the Department of Civil, Construction, and Environmental Engineering (CCEE) and the dean’s administration.

As student sweethearts at NC State, Andy and Jan Ammons have fond memories of meeting in Metcalf Hall and racing from the top of Harrelson Hall down that circling walkway.

Andy Ammons’ father was an NC State agricultural engineering graduate and a Raleigh developer. After working with a couple of big construction companies in Florida, the son returned to North Carolina to work with his father on two big development projects in Wilmington and Nags Head.

The Ammonses returned to the Triangle to raise their three children and start a new project near Wake Forest. Today, Heritage is a sprawling residential and commercial development with 4,500 housing units on 2,600 acres.

As their development work has begun to wind down, the couple created a family foundation to give back by supporting projects in line with their values. The Jandy Ammons Foundation supports capital projects that speak to their passions: parks, trails, the arts and volunteerism for her and conservation for him.

They say the Oval project checks boxes for both, and acknowledges their passion for NC State.

The couple likes the progress the University is making on Centennial Campus.

“A lot of great things are coming out of NC State.”

“It’s time to get civil engineering over there,” her husband added.

“It was a blur,” Larry Bowman said of his time at NC State.

Bowman completed a degree in industrial engineering in less than three years. After that final exam, he remembers feeling more than just relief. He knew he had learned marketable skills in that relatively short stay on campus and was excited about the opportunities ahead. He felt prepared.

“I felt that I had built a good foundation.”

After graduation, Bowman returned to his native Hickory, NC to begin a 30-year career in the telecommunications business. After working for two companies in the area, he and a partner acquired a satellite technology company and later sold it to General Dynamics.

It was work that took him to some interesting places as the company marketed its commercial satellite technology in areas that didn’t have it, including China, India, Indonesia and the Eastern Bloc countries after the Iron Curtain fell.

He reconnected with NC State in the late 1980s and has served on the advisory board for the Edward P. Fitts Department of Industrial and Systems Engineering (ISE), the University’s Board of Visitors and the board for the NC State Engineering Foundation. He is also an ISE Distinguished Alumnus.

“The College of Engineering has continued to develop, to rise and be recognized,” he said. “It’s been fun to be a part of that.”

That ISE home department will benefit from the move to Centennial Campus. Bowman knows the Oval project represents a major step forward as the College aims to reach its full potential.

“Having the College of Engineering completely on Centennial Campus is extremely important,” he said. “I think it’s essential.”

If there is a way for an alumnus to support the College of Engineering, Frank Culberson has probably done it.

Culberson earned a bachelor’s degree in chemical engineering in 1960. After working with the Shell Oil Company/Shell Chemical Company and the Pace Company, he joined and later led Rimkus Consulting Group, Inc. He is now a director and chairman of Rimkus, a forensic consulting company that performs engineering and business assessments concerning accidents, injuries and structural and mechanical failures.

Culberson and his wife established the S. Frank and Doris Culberson Academic Enhancement Fund and have endowed two professorships in the Department of Chemical and Biomolecular Engineering.

Always looking to stay involved with the College and University, Culberson has agreed to serve as campaign volunteer chairman for the College for an upcoming University wide fundraising campaign that will include support for the Oval building.

He recalls a Foundation board visit to CCEE in Mann Hall. The board members recognized that upgrading the facilities in Mann, built in 1964, is an important priority.

Culberson sees great value in uniting the College on Centennial Campus, making first-class facilities available to all of its students and faculty members.

“There are a lot of advantages to having everything together,” Culberson said. “I think this is critical for NC State.”

Early donors of $50,000 or more to the Oval project will be part of the Cornerstone Society, a select group of donors who will:

Naming rights are available for classrooms, atriums and laboratory spaces in the Engineering Oval and are a great way to leave a legacy in the College’s new premier facility.

*On April 20, 2018, at the groundbreaking, the Engineering Building Oval (EB Oval) was renamed Fitts-Woolard Hall.